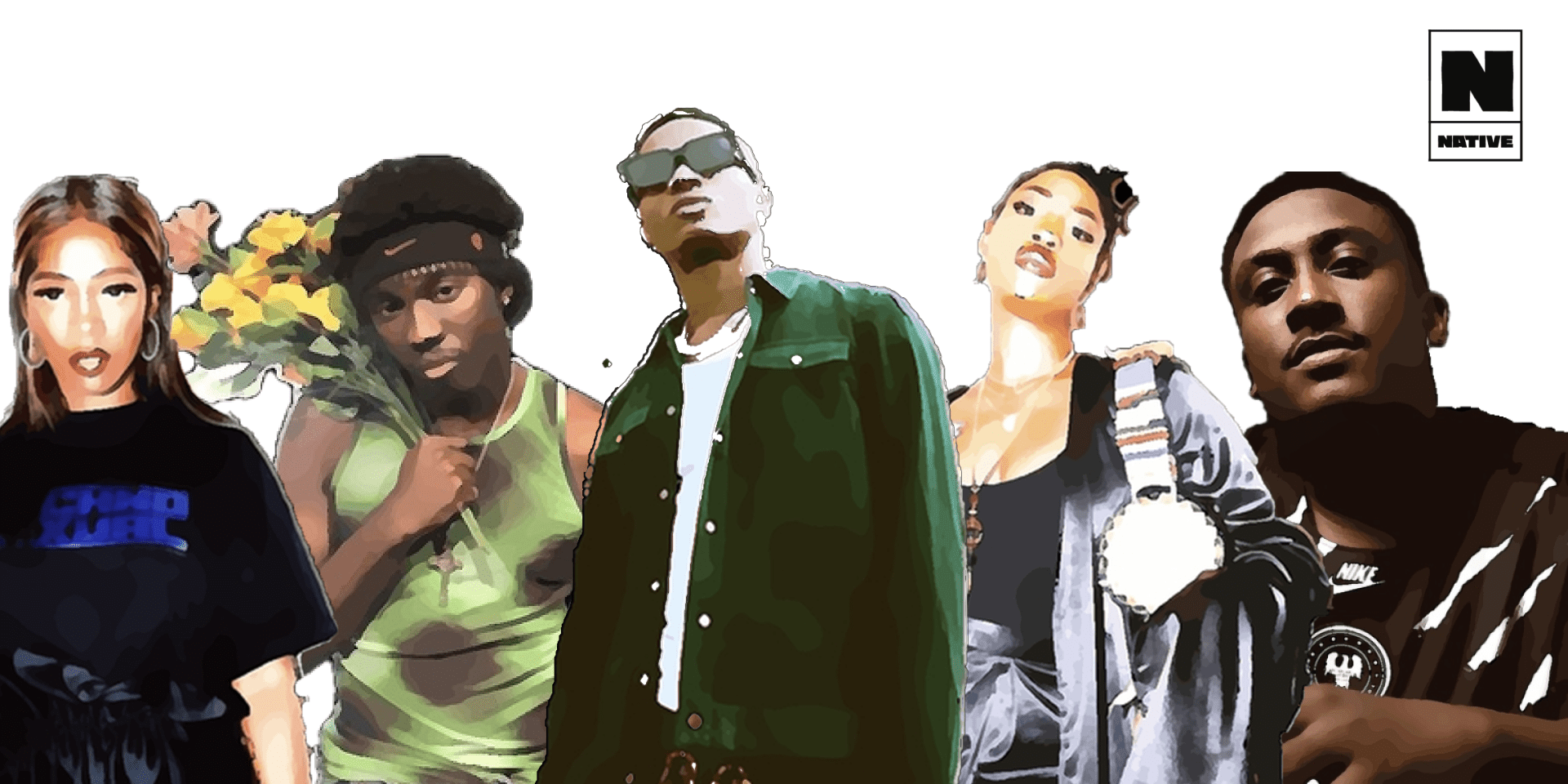 From Wizkid's 'Made In Lagos' to Tems' debut project

If there’s anything the last decade managed to reinforce, it’s that albums and multi-song projects in general will always be a mainstay. As streaming increasingly became the primary mode of music consumption across the globe, there were initial speculations about the possibility of full-length projects losing their significance, which further aided by the prioritisation of playlists by streaming platforms. However, with the barrage of new music seeking attention from listeners every Friday, it is clear that the instant access of the streaming era has improved the two-way street of project release and reception.

Currently, the African music terrain is still warming up to music streaming, however, its slow and steady adoption has had a similar effect on the release of albums and EPs, even playing a direct role in the increasing musical diversity across the continent. While Africa remains a singles-driven market, the stakes around multi-song projects have grown considerably, serving as a solid medium to cement artistry and increase fan love. Reference points from last year include the crossover success of Burna Boy and Santi via their albums, ‘African Giant’ and ‘Mandy & The Jungle’, career-defining debuts from Fireboy DML and Lady Donli, and Rema’s rapid rise to prominence with the release of stunning back-to-back-to-back EPs.

We’re still in very early days of 2020, but it’s only right to project that this will be a banner year for music, especially pertaining to albums and EPs. With superstars like Wizkid, Olamide and Nasty C due for follow-ups to their previous solo projects, and ascendant artists like Tems, Oxlade and Darkovibes most likely dropping debut projects, the line-up for 2020 looks fully stacked.

So to get everyone excited, here’s a list of projects to look forward to as the year kicks into gear.

It’s been over two years since we got a Tiwa Savage project, ‘Sugarcane’ (EP), and we can all agree that a new project is due. After a successful stint as the flagship artist of Mavin Records, Tiwa Savage made a potentially big move by signing an international recording contract with Universal Music Group. The singer has been relatively busy since, dropping three singles, “49-99”, “Owo Mi Da” and “Attention” which she performed on A Colors Show last November. With Universal’s resources at her disposal, Tiwa is primed to make an even bigger splash this year, and we think a full-length should definitely be on the horizon.

If any African rapper personifies JAY-Z’s evergreen bar, “I’m not a businessman, I’m a business, man,” it’s South African rapper Cassper Nyovest. Since he broke out with his viral hit song, “Doc Shebeleza”, Cassper, who was independent until he signed with Def Jam Africa in late 2018, has continually pushed the bar for commercial excellence. Following a relatively silent 2019 and his last project, the Kwaito-infused, ‘Short & Sweet’, the rapper might just be gearing up for a new body of work, especially since in the past, the longest period between Cassper’s albums maxes out at 18months.

Odunsi’s game-changing debut album, ‘rare.’, moved the singer from aspiring star to juggernaut. Drawing inspiration from the sleek and bouncy sounds of ‘80s disco, Odunsi managed to make an album that stands out from everything in his catalogue —and contemporary afropop as well — while also strengthening his identity as an artist who writes his own rules. In just over a year since, the dark prince of afro-pop has been making moves to hit the next level, including recording new music for an upcoming project. Hopefully, this effort culminates into sonic exploration that will thrill us very soon – fingers crossed.

Wizkid – ‘Made In Lagos’

Ever since Wizkid publicised ‘Made In Lagos’ as the title of his fourth studio album, the anticipation hasn’t dwindles. Expected to drop in 2019, the singer refrained from delivering any further details, and even starved fans of new solo music for the majority of last year. However, when it rains, it pours, and in a typical superstar flex, Wiz dropped ‘SoundMan, Vol. 1’ last December, a 6-track project, which is meant to serve as a placeholder for ‘MIL’. When Wizkid is ready, you can rest assured we’ll all be ready.

Tems only makes riveting music, and this is why the big voiced singer has managed to go from from hot prospect to superstar-in-the-making after 15months and just three singles. Last year, she dropped “Try Me”, her runaway hit, which unravels her projected full form as a strong afropop vocalist. One would only expect Tems to build her increasing fan base from her sparse catalogue so far, and a sure-fire way to seal her ceremonious arrival will be with the release of a debut project that cements her as the leading light of a new crop of artists.

For the first time since debuting in 2011 with ‘Rapsodi’, last year was the first year where we didn’t get a full-length project from Olamide. Although his status as a seminal figure in contemporary pop culture has already been sealed, his prolific streak of multiple hit songs every year, suggests he has more than enough fuel in the tank to keep going as we enter a new decade. Unless there’s a serious glitch in the matrix, we should be receiving an album from the tireless artist in 2020—it’s long overdue.

Ghanaian singer/rapper Darkovibes is an artist you should keep your ears tuned to in 2020. As the de-facto face of La Meme Gang, Darko melds slang-infused lyrics with gruff vocals, lending an edginess to his catchy music. It was initially rumoured that Darko would be releasing his solo debut project in 2019, but it seems like he’s pushed back to this year, and his increased activity from the second half of last year suggest as much. He released the romance-themed “Different” in August, following up with the menacing, Runtown-assisted “Mike Tyson”, then closing out with “Come My Way” featuring Mr Eazi.  With all of this in mind, we say again, look out for Darko’s debut.

It’s easy to be excited about Gigi Atlantis’ future as a singer/songwriter, given what we’ve already got from her. Her 2019 single, “2020,” showcased her ability to make emotive and relatable music, while she effectively broke out with her follow-up single, the Fasina-assisted “Wahala On The Rocks”. In 2020, the tender-voiced singer will look to establish herself as a distinct voice. This means more great music, and there’s already rumours of a debut project in the works. Hopefully it comes out soon, showing off the best of her powers.

D-O’s machismo-driven persona, chant-ready lyrics and ear for stomping production has made him a distinct figure in contemporary afropop. His debut project, ‘Everything Pretty’, received instant acclaim, showcasing D-O as an artist built for the long run. The rapper is gearing up to release his sophomore album, ‘Pretty World’, a project he revealed on his socials back in July last year. Two singles off ‘Pretty World’ have already been unveiled—“Dey Go Hear Wehh” and “Same Energy”— which continue his ability to spin anarchy into mischievous bangers.

GMK prefers to let his music do the talking, and has receded further away from the spotlight in recent years, but his catalogue of credits—mixing and mastering entire albums from Odunsi and Santi—is proof of someone who’s hard at work. But he’s not just working on other artists’ project, word on the streets is that GMK will be dropping more music this year. In an interview with Culture Custodian last year, the multi-hyphenate creative shared plans to release two projects, one as a producer/curator and another as a rapper. With his reputation as a meticulous music maker, either or both GMK projects will definitely be a blessing for this year.

Nasty C proclaimed himself “King” on his previous album, ‘Strings & Blings’, and he’s been living up to that title ever since. The high-flying rapper recently wrapped up the ‘Ivyson’ tour in support of his sophomore project, which has been certified double platinum by the Recording institute of South Africa. Looking to keep the momentum going, Nasty C is moving on to the next phase of his career, recently promising to drop “new fire music real soon.” The rollout for his new project may have already started, with his single from last year, “God Flow”, and he sounds as imperial and buoyant ever.

SoulBlackSheep has a preternatural ability to turn complex emotions into trippy, affecting songs. ‘Ecstasy, Just Chill’, Soul’s debut mixtape, was one of the most pleasant surprises from 2018, where the the Ibadan-based singer channelled a range of heartfelt feelings into a lo-fi universe. The NATIVE Trybe Alum was quiet for most of last year, only releasing the Tron-assisted “Dream”, but we have it on good authority that he’s currently building towards dropping a new project sometime in the coming months. This means more gorgeously sung, hymn-like tearjerkers to catch and expel feelings to.

In just three singles, MOJO has shown flashes of an artist with the potential to become a mainstay, and a huge star even. His Prettyboy D-O-assisted single, “Chop Life Crew”, grew into one of the biggest songs from last year, and it’s still even racking huge co-signs. However, MOJO’s huge hit is only the foundation for an exciting career ahead, as the rapper is already gearing up to release a body of work. With his gruffy voice, deadpan delivery and quotable slangs in Yoruba and Pidgin English, the prospect for MOJO’s debut project is very enticing.

NATIVE TEAM PICKS: THE BEST MUSIC VIDEOS OF THE 2010S