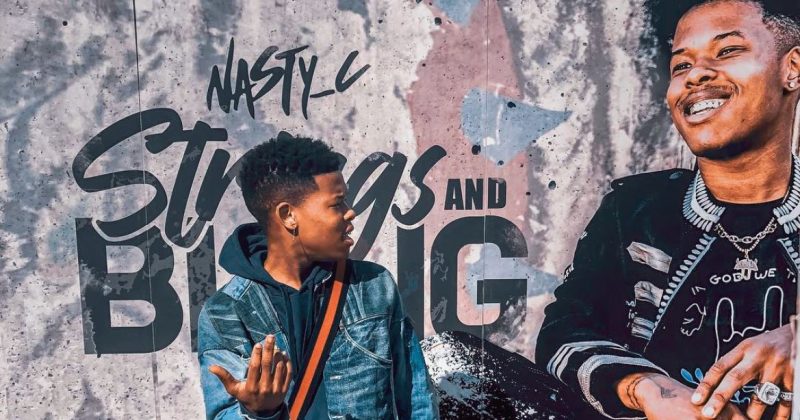 Nasty C was unable to hide his excitement when he recorded the Instagram post announcing ‘Strings and Bling‘ was almost ready to be released back in May, saying the album was “99.99999999 done”. But after setting a 6th of June release date, its release was delayed till the 9th of July.

Notwithstanding, the reason for his excitement becomes apparent right from the album’s opening first track, “Blisters”, as he breaks down his acclaim, backed by an impressively produced beat. Though celebrating triumph is a running theme in Hip-hop, Nasty C also gets introspective on ‘Strings and Bling‘. He already explained on his Tim Westwood interview that “Strings means connections. Connections that I have with people, especially with my mother. The bling side is just me being a bit more spontaneous and just having fun with it”. The combination of the two takes a broad cross-section of the rapper’s growth since his debut with ‘Bad Hair‘ in 2016.

On the title track, “Strings and Bling”, he opens up about his struggles with anxiety and suicidal thoughts while on the ‘streets’, before he made it to the bling. The next track, pre-released “Jungle” paints a clearer picture of the chaotic and hostile nature of the street with an accompanying video, set in an anarchic night scene. And though the album is punctuated with arrogant brags, rather than hindering his work, packaging his self-importance with his anxieties is what gives Strings and Blings its soul.

Buy 2, get one FREE! #StringsAndBling

Production from American producers, Blu Magiq and Cxdy as well as South Africa’s Africa’s Gemini Major, Tweezy, Gobbla, and Nani is top notch, but it’s Nasty C’s personae and buoyant enthusiasm that shimmers in the spotlight. He’s only 21 and likes to have fun so he can afford to get away with goofball lines like “Ivyson religion is awesome/I’m not selfish with the skopas/They call me dick in daughter”, especially if he has the good nature to laugh at the ridiculous line on “No Respect”. His confidence on tracks like “Do U Digg” and the effortless flow switching on “Gravy” more than make up for lines said in jest.

If you’re a fan of hip-hop, “Legendary” and A$AP Ferg assisted “King” is probably nothing you haven’t heard before; It’s a pleasant stroll down through Nasty C’s mindscape as he expresses his kingly status.

Things take a darker turn on “U Played Yourself”, a track that finds Nasty C giving relationship advice on how to avoid getting played, and “SMA”, one of the 3 tracks with a guest feature. “SMA” stands out in particular because of the Enimem-style narration of a broken relationship between lovers who clearly love each other but are too self destructive to try to find happiness; “Somehow My Heart Feels Safer When You Hold it/Like You Not the One That Broke it”.

Over somber percussion, Nasty C’s insecurities are brought to light on “Another One Down” where he calls himself “Sensitive” and explains how he is learning to be more trusting and open. As if to prove it, on the next track, “Everything”, he gets emotional and admits his feelings for a love interest while featured guest, Kaien Cruz encourages him singing “We Can Be Who We Are In My House/You Don’t Have To Worry About Nothing Cause I’ll Give You Everything”. There are other pseudo-romantic tracks like “Mrs Me” and “My Baby” but ‘Strings and Bling‘ closes with “Jigga Jigga”, a cocksure trap number confirming Nasty C’s celebrity.

Stream ‘Strings and Bling‘ on Apple music below.

Next Article Uzo Aduba is apprehensive, but brave in the new season of “Orange Is The New Black”