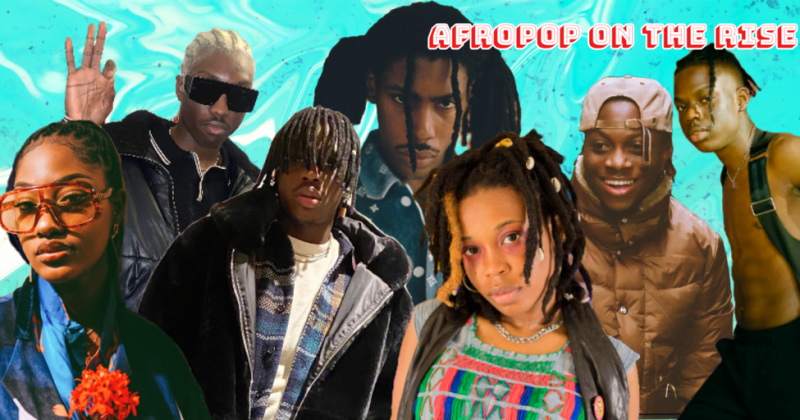 Afropop on the Rise: We’re witnessing a dominant new line in the afropop vanguard

In just over a year since he was properly introduced into the mainstream, we could be getting a potential smash hit with Rema and the one of biggest artists in the world right now. After dropping his highly anticipated debut album, ‘Mandy & the Jungle’, Santi has gained wide international acclaim, performed at festivals all over the world, directed a music video for Goldlink and is reportedly working on a ground-breaking TV series.

In less than six months since its release, Fireboy’s ‘Laughter, Tears & Goosebumps’ has already been streamed over ten million times on Boomplay alone. With the runaway success of her first hit single, “Try Me”, Tems has become the leading light for a new generation of phenomenal female artists, and with a long line of admirers and high-profile collaborations in the tuck, that light is set to get more intense and brighter.

All of this considered, when you add Nasty C’s recent recording deal with Def Jam, Joeboy’s continued run of hit singles, Oxlade’s debut EP, ‘Oxygene’, racking over three million streams within the first week of release, you can see there’s clearly no shortage of milestone accomplishment from the African music’s younger stars. It could be due to the increased global attention around afropop, or it could be the pace of the news cycle and attention spans in general, what’s sure, however, is that these successes are far more significant than initially meets the eye. We are already witnessing a dominant new line in the Afropop vanguard, and it’s lit.

As much as stakeholders, music heads and fans search for and predict the next big thing, it’s odd that we don’t always realise a renaissance is in full effect until we’re knee or ankle-deep in it. This makes it a bit difficult to trace when things actually got jumping, however, what we do know is that nothing has been the same since around 2018.

By the summer of 2019, this crop of budding superstars were making further in-roads towards stardom, and they were joined by more nascent faces along the way, who are now certified hitmakers in their own rights. Fireboy’s “Jealous”, which originally appeared on the YBNL compilation from December 2018, became a smash hit; Joeboy’s “Baby” was inescapable after a slow build from the previous year and became the wedding anthem of the summer; and Rema’s “Dumebi” came and blew everyone out of the water. The best part about this invasion is the fact that all these artists are musically disparate, however, still co exist and are all winning, upends the idea that there’s only a token number of spots at the top for artists who don’t make generic afropop.

The game hasn’t really changed, in the sense that an artist typically has to go from unknown, to underground and then to mainstream. What separates this class of artists, however, is their cumulative effect and potential influence on the entire Afropop landscape. Since the early ‘10s window which produced a long-serving, dominant sect of artists such as Wizkid, Davido, Stonebwoy, Tiwa Savage, Burna Boy, Black Coffee and more, impactful new artists have mainly come in trickles, with some trailing off at some point.

With the amount of success they’ve already accrued in a short span, and the hunger they continue to show, Nasty C, Tems, Kwesi Arthur and their other talented counterparts are in good shape to continue pushing afropop’s charge for improved and innovative musical excellence, as well as increased global success. In what is perhaps their most defining element, this class isn’t looking to replace the predecessors; it’s more about staying true to themselves and evolving their own craft.

If you look through its past, the new completely phasing out the old is the norm in afropop. Some might explain it as the natural order of things, but the reason is actually less fatal: contemporary afropop is a young genre. At every point in time, the world has to cater to the age brackets which set trends: 16-35 years old. The youngest tend to dictate what the new trends are, and we’re witnessing a time when self-awareness and authenticity is what’s in trend.

All over the world, the most popular musicians are those who you can tell aren’t presenting a gimmick, and are just being themselves, and they manage to gain everyone’s attention with it, because we can all relate on some level. We’re experiencing a shift in consciousness as a generation, and afropop is catching up to this now.

For the majority of its first two decades, the modus operandi was to adapt or get left behind, and while that is still a factor, there’s more room for co-existence in the post-‘SFTOS’ era. This means that older artists can now inspire younger generations and still remain prominent years after breaking out—much in the same way JAY-Z, Eminem and Kanye West exist in the same realm as Drake, Future and Kendrick.

From a broad view, these relatively new artists have been able to learn the game through two previous generations of hitmakers, and have the room to create as they want. They are old enough to recall the days of Styl Plus and early P-Square, but their formative teen years were soundtracked by the Wizkids and Olamides. From Rema and Wizkid, to Oxlade and Wande Coal, this is the first time in afropop many younger artists invite vivid comparisons to their OGs without any form of competitive tension.

Even those who don’t remotely sound like their local inspirations on wax aren’t shy of making them public. Santi has mentioned how instrumental M.I Abaga’s seminal debut, ‘Talk About It’, affected his early days a rapper, a lot of Odunsi’s quirky aesthetic is due to his love for Nigerian music history, which was confirmed by the Ruff, Rugged n Raw sample he used in his 2019 track, “Wetin Dey”.

While we have these comparisons to draw for the men, it’s not quite the same for the ladies. Regardless, Lady Donli cites older African music women like Oby Onyioha and Oumou Sangare as her influences, with no mentions of the more contemporary pop divas—and she’s not alone. Some of that stems from the notion that there can only be one woman at the top alongside a multitude of men, but now with the crop of many women we have on the scene, there’s positive indication that things will be different going forward.

In all of this, it’s impossible to downplay the eye-opening effect of the internet and satellite TV on this crop of artists. With these technological advancements, this generation was able to feed their creative imagination, thanks to the fact that they had access to all the music that exist on the internet and outside of their own personal scopes. On his latest single, “There They Go”, Nasty C name checks Lil’ Wayne as the main influence behind his career, while the music video for “Strings & Blings” also sees him paying homage to the South African rap pioneers who inspired him as well.

Beyond its influence on the actual music, the post-digital era has also altered the way people interact with music by a lot, and even though this has led to a fragmented music space, it’s serves as the perfect crucible for the new generation of stars. Social media and streaming services gives musicians direct access to their listeners, and also the room to appeal to a diverse fan base, without the restriction of location.

With this in real time interaction, artists get to play both sides of the fence, garnering support at home and abroad. We exist in a time where Billie Eilish’s favourite artists is Zlatan, and Rihanna is vibing to Rema’s “Dumebi” on her Instagram live, so clearly, the music is moving. Following their respective debut albums, Odunsi and Lady Donli went on mini-UK tours; Tems was a fixture on a number of huge stages during last December’s festivities; Rema performed at the recent all-star weekend; Nasty C’s Ivyson Tour took him around Europe; and Santi was on two major U.S festival stages last year.

For all these feats, this set still has more to accomplish in order to surpass the currently dominating set. Considering all they’re already doing, there’s every indication that the ride’s only going to get better and bigger as time goes by. Whatever lengths they take it to, it’s sure that they’ve already set a high bar for coming generations—it will only get higher with time.

Next Article Songs of the Day: New music from Mayorkun, Teni, $pacely, Suté Iwar & many more