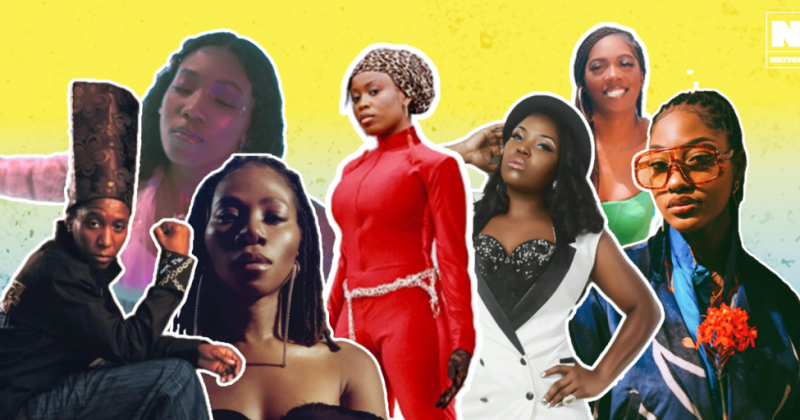 For the Girls Special: How women’s place in music has changed over the the decade

The music scene in Nigeria has benefitted from a large crop of women who have come in and out of the limelight, and played a part in making afropop the profitable and domineering genre it is today. Now more than ever, we’re gaining visibility all over the globe, the world is looking to Africa and paying attention to her sounds, and for once, not just the men.

Back in the late ’90s to early 00s, the music scene in Nigeria witnessed a defining moment where most of the mainstream songs mirrored American hip-hop, owing to the rising mainstream popularity of the genre at the time. This saw many Nigerian artists adopting similar versions of the late 90s and ’00s trends, like we saw from artists like Tony Tetuila to the Plantashun Boiz, Ruggedman and many others.

This is not to say that any of the women were left out of this monumental time in music history, as we had a crop of female rappers leading the charge and redefining what it meant to be a rapper in Nigeria. Like you’ll find with other indigenous rappers who are left out of rap conversations, Weird MC at the time was one of the unsung heros of the 00’s hip-hop/rap era. Most people from our generation would probably only know her two most popular songs, “Ijoya” & “Allen Avenue”, even though she had been in the game for most of our lives at these points. Beyond the music and her position in the rap scene, her androgynous style set her apart, and created a space for women like her who didn’t stick to the norms.

Following quickly on her heel, Sasha P, crowned ‘First Lady’ of rap at the time went on to achieve a number of firsts for female artists in Nigeria. In 2008, she became the first Nigerian female artist to perform at the World Music Awards, and two years later was the first Nigerian to win the Best Female Award at the MTV Africa Music Awards. Although some of the fiercest MCs at the time, Weird MC and Sasha P both retired from the mic; where Weird MC took on a more mentor-ey role in the industry to push younger artists, and Sasha P went into the fashion industry.

This is in stark contrast to the male counterparts from that time, who are revered today for their status as industry veterans, while the women are usually looked upon as a distant memory. Although Plantashun Boiz eventually split up, the group’s lead member, Tu Face, became one of the biggest household names in the history of Nigerian music, and has maintained mainstream relevance over the past two decades. Furthermore, the most popular female artists today are the women who came much later on in the next decade, such as Tiwa Savage, Simi, Asa, Teni the Entertainer, when attitudes towards women had changed and we began to take charge of our own narratives worldwide.

In addition, men always found a way to feed off each other, while the women typically didn’t come together and were rarely ever even featured on the men’s songs. This is not to say, however, the male artists weren’t collaborating with the women around them – Sasha P was part of hip hop collective, Trybesmen and had standout verses on songs like “Oya“, and just last week we had a look at how Lagbaja’s “Never Far Away” was an all-time classic particularly due to the song being helmed by Ego Iheanacho Ogbara, whose career never took off after she split from the band.

Music consumption back then was also very different to what it’s like today. To listen to music, you would have to buy physical albums or tune into radios or TV stations, therefore to really excel as artist, listeners had to buy your albums and tapes. The most successful arists were the most popular ones, and the women at the time weren’t given the same treatment and opportunities that the men were.

Female artists at the time were not what’s considered mainstream entertainment. In fact, women were fighting for their voices to be heard and also for the one seat at the men’s table allocated to them. Looking back, knowing what we know today, it would have served them better to come together, rather than compete.

These days, however, things are different and women are able to gain more visibility on their own thanks to the Internet and streaming, which makes profiting from your music much easier. Today, to access a musician’s entire discography is one search tab away, and the success of this is evident in independent artists such as Tems and Lady Donli, who with no label backing have towed their own paths and made their voices heard.

Prior to Tiwa Savage, it would be difficult to point to a female afropop superstar, thanks to this unspoken idea that there’s only space for one women at a time, alongside all the other men dominating the scene together. Growing up, as a young Nigerian girl, there was no one in Nigeria who held the same reverence to us that Britney Spears or Beyonce were in ’00s pop culture.

Currently jarring numbers show that only 21% of the global music industry are women and within that, only 3% produce and another 2% mix and master their music. We’re sure that within the Nigerian music industry, these numbers are even lower, within the different areas of the ecosystem from DJs and producers to songwriters and rappers. While the rap scene in the country is still finding it’s feet, the number of female rappers are basically zero to none, with only a few like newcomer Yazavelli and old timers such as Eva Alordiah spitting their truth.

Everywhere else in the world, women creating space for themselves, as we’ve seen over the years with artists like Lil Kim, Remy Ma, Nicki Minaj, Cardi B, Megan Thee Stallion, Tierra Whack and many others. It would be very difficult to point to that many women in our industry, and we all know what the reason for that is.

The progress women have made generally from the public’s reception of them to the amazing sounds they produce is immense, now we have a younger set of artists who are willing to put each other on and are even creating space for each other to win together. We’ve seen this from Tems to Dami Oniru, Bella Alubo, Tomi Agape, Efe Oraka, Ictooicy and many more. As the world became more aware of the importance of women’s place in society, so did the notion that more than one woman can win just like her male counterparts.

Lady Donli’s stunning debut album ‘Enjoy Your Life’ had more than its fair share of collaborations from other women such as 234jaydaa to Somadina to even Ghanaian pop princess, Amaarae; Bella Alubo’s recent EP, ‘Summers Over’ had Ezi Emela on the project’s standout track “Don’t trust Geminis” showing just how much growth and good sounds can come out of women working hand in hand to create their own legacy.

Even the existence of the more contemporary r&b, lo-fi sounds from Solis, LunaLovesYou, 234jaydaa, Merry-Lynn and our entire list of discoveries this month, is just further proof that there is space for more than one woman at a time, and also that we don’t need a seat at the boys’ table to be seen.

It’s important for us to keep this momentum going, and support women in music as much as we can, so that younger generations to come can look back with even more respect and reverence for the women who have come before them.

Next Article Songs of the day: New music from Crayon, Terry Apala, Niniola, Veen and more