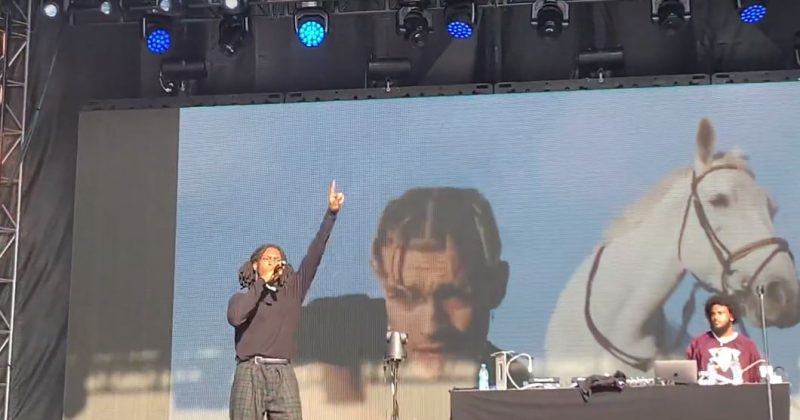 What a time to be alive! Drake -one of the biggest superstars in the world- got booed off the stage at the Camp Flog Gnaw concert, while Santi’s exciting performance at the same show was met with warm reception.

Where Drake’s set failed to connect with Tyler, The Creator’s audience specifically, Santi had no such problems when he performed songs off latest ‘Mandy and the Jungle’. His energetic performance got cheers from the crowd as he performed “Rapid Fire” and other standout cuts from the project.

Sho Madjozi became an international sensation after her single, “John Cena” got acknowledged by the titular inspiration for the song. She’s still having her moment, as she featured on Kelly Clarkson’s “The Kelly Clarkson Show” last weekend. After speaking about her background and the inspiration behind the show, she performs the song for the audience and gets loud screams from them when she’s joined by the retired WWE wrister whos performs the John Cena dance by her side.

DNA have released a new single, “Ifesinachi”, and accompanied it with a music video. Produced by Don Jazzy, the catchy afropop beat for “Ifesinachi”, sees the twins singing “We must dance oh” while celebrating their good fortune. The music video is directed by Lekan who shows the duo as they take a joyride through Lagos in a convertible Benz with girlfriends in the backseat. After releasing “Ayo” and “Star” at the start of the year, “Ifesinachi” is the third song from DNA this year.

Though the internet is responsible for making Doja Cat’s “Moo” a hit song, she has surpassed the one-hit pop star label critics were quick to give her. Her newly released project, ‘Hot Pink’ removes any doubt about the hit song being a flash in the pan as she delivers 12 impressive tracks. The music video for the opening single, “Cyber Sex” plays out like a tribute to the internet (or at least technology) as she explores the raunchy side of technology with the sci-fi inclined music video.

The second episode of the new season of “MTV Shuja Naija” was released last Sunday. In the 21-minute run time of the episode, we see Faa continue her fight to ensure Ebsinde gets justice, while he serves jail time for a crime he didn’t commit. The highschool plot, however, follows Frances’ struggle with mental health, as she withdraws from her friends to cope with the trauma of being assaulted. The next episode is expected to be released next Sunday by 7:30PM.

Fans were quick to dismiss the first trailer for Paramount’s “Sonic the Hedgehog” live-action film. The lovable blue speedster was depicted as a nightmarish experiment with the seemingly more realistic art style. The newly released second trailer shows the studio listened to the complaints from fans and made changes to the CGI look for Sonic. The cartoonish big eyes are among the more notable changes made to give the film a more family-friendly allure as the trailer also offers scenes that capture the bromance between Sonic and his human friend, Tom, and the goofy villain played by Jim Carrey.

ICYMI: Merry-Lynn’s ‘Petrichor’ is a most listen

Next Article Watch Larry Gaaga & Flavour In The Video For “Tene”