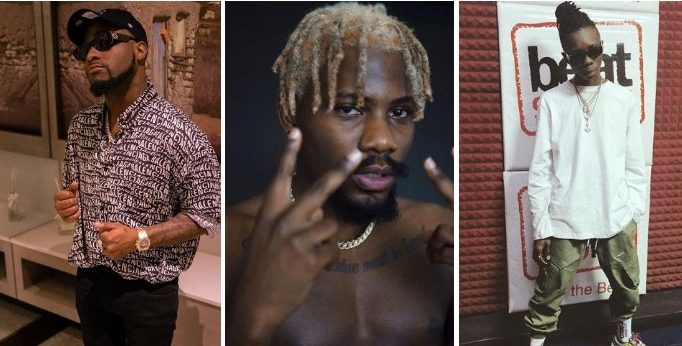 With 2019 albums like Burna Boy’s, ‘African Giant’, Santi’s ambitious universe, ‘Mandy & the Jungle’, and Beyoncé’s ‘letter to Africa’, ‘Lion King: The Gift’, Afropop is witnessing a new appreciation. EPs have also become a more mainstream format thanks to Mavin wunderkind Rema, who effectively built up his claim to Afropop’s golden-child crown with three 4-track projects over the last few months.

2019 might be coming to a close, but it looks like we’ll be getting a flurry of new releases contending for spots on year-end recaps. In the last few weeks, a handful of artists have revealed titles and/or release dates for new projects. Fans are already in a frenzy all over the world, but we went ahead to collect eight of the most important ones you should look out for.

Since the release of his Bad Boy Blaq Re-Up, Blaqbonez has gradually gained notoriety for being rap music’s resident rabble-rouser. It also helps that his prolific stream of releases matches his frequent, amusing antics on social media. The rapper recently announced a  new EP, ‘Mr Boombastic’, titled after his new meta-persona.

He introduced his new persona, Mr Bombastic, as an irreverent ruffian with a new single, “Shut Up”, and a menacing video to match. He’s repeatedly told the media that Mr Boombastic’s major purposes are getting money, chasing women and flexing on haters. While these themes are common in Blaq’s catalogue, the new EP is an interesting pivot that reframes his artistic growth and should help his ploy to take over the mainstream.

Zlatan’s rise to mainstream prominence was meteoric. The release of his viral street single, “Leg Work”, coincided with his standout verse on Chinko Ekun’s smash hit “Able God”, effectively catapulting the rapper to major concert stages in December of last year. Since then, he’s had a swell time, getting featured on hit songs like Burna Boy’s “Killin’ Dem”, DMW’s “Bum Bum”, and IVD’s “Bolanle”, while providing his own street hits like “Osanle” featuring Davido, “This Year” and the Tiwa Savage-assisted “Shotan”.

In a singles-driven space, Zlatan isn’t under any pressure to release an album, but he’s doing it anyway. ‘ZANKU (Zlatan Abeg No Kill Us)’, his debut album, will be out on November 1 and its latest single, “Yeye Boyfriend” is already making the rounds.

Over the last two years, Abuja-based hybrid Afropop-trapper, PsychoYP has been able to build a rabid, cult fanbase, via new releases and guest features. In June 2018, he released his debut full-length project, ‘YPSZN’, one of last year’s standout projects with assists from similar-minded hybrids like Santi and Remy Baggins.

YP has teased a sequel project, ‘YPSZN 2’, in the last few months, and has now confirmed its readiness with a November 4 release date. He’s now updated that announcement with an official tracklist, comprising sixteen tracks and pulling in a variety of features from Skales, Ladipoe, Blaqbonez, Dami Oniru and more. With his proven ability to deliver vibrant, self-assured jams with high replay value, ‘YPSZN 2’ should be delightful enough to command multiple front-to-back listens.

After months of hinting at issues with former label, Tinny Entertainment, Ycee finally gave frightening specifics, last month. Although he’s still dealing with sabotage from his former employer, it is clear all he wants to do is move on with his career. He’s independently released a few singles, like the Headies-nominated “Balance”, but his clearest step forward is the impending arrival of his debut album, ‘Ycee vs Zaheer’.

Scheduled for release on November 8, the album will showcase Ycee’s range as a singer and rapper. Last Friday, he released “Dakun” as the lead single, taken off the melody-driven side of the album. Ycee is looking to re-establish himself as a proficient dual-sided artist, he has everything to prove by the time ‘Ycee vs Zaheer’ hits our playlists in the coming weeks.

Since entering Nigerian playlists with “Show You Off”, his 2016 collaboration with Shizzi and Major Lazer’s Walshy Fire, WurlD has continued to turn heads, including that of veteran producer Sarz. The pair linked up for the first time on last year’s single, “Trobul”, promising to extend their efforts into a joint EP.

They returned with “Ego” earlier this year, and have now set November 8 as the release date for their project, ‘I Love Girls With Trobul’. Unlike the multi-genre, blue-eyed nature of WurlD’s debut EP, ‘Love Is Contagious’, the music from the pair is closer to Electro-Pop territory. While they’ve shown their strength as a formidable pair, it’s the first time in Sarz’s storied career that the producer is attaching his name to a project with an artist, which is part of where our hype stems from.

In September, Afropop superstar Davido advertised October 11 as the release date for his long-awaited sophomore LP, ‘A Good Time’. That day came and went without as much as a new Davido single. However, Gauging his social media activity in the last few days, it looks like go-time.

Earlier this week, he announced an inbound single, “Risky” featuring Jamaican star Popcaan, and publicly toyed with the idea of putting out a pre-order link. In a recent interview with Vibe, the singer confirmed that his album was done, and would contain 13 songs traversing a multitude of genres and high profile features. There’s no concrete release date for ‘A Good Time’ just yet, but best believe it will be one of the biggest music events of the year when it drops.

After the lukewarm reception to his debut EP, ‘Heartwork’, Perruzzi returned to playlists with the reggae-inflected “Nana”, last month, to positive reactions.

Pressing on with his resurgence, Peruzzi announced the title of his debut album, ‘Huncho Vibes’, earlier this month, sharing its tracklist a few days later. The album will contain ten songs, with “Nana” serving as the lead single, and label boss Davido being the only guest artist. There is no scheduled date for ‘Huncho Vibes’ at the moment, but with Peruzzi’s confident attitude, our guess is that it will be out in coming weeks, and it could very well be the singer’s best work yet.

Reekado Banks – ‘Daddy To Many’ (TBA)

At the beginning of 2019, Reekado Banks announced his decision to part ways with Mavin Records, after a successful 4-year spell with the label that helped usher him into the limelight. It is not unusual for newly independent artists to recede into obscurity without coordinated backing, but Reekado Banks is inching towards consolidating his popularity.

After a string of loose singles and features, the singer’s new single, “Rora”, has steadily worked its way into becoming a hit. It is the lead single for his coming album, ‘Daddy To Many’, and while there aren’t any other details to go on just yet, the ongoing success and infectious quality of “Rora” raises expectations to the roof. In a recent interview, he revealed plans to drop the album in late October or early November, meaning we could be looking at Reekado’s sophomore album before the year runs out.

Next Article Listen to Zirra and BOJ on new single “Womanizer”