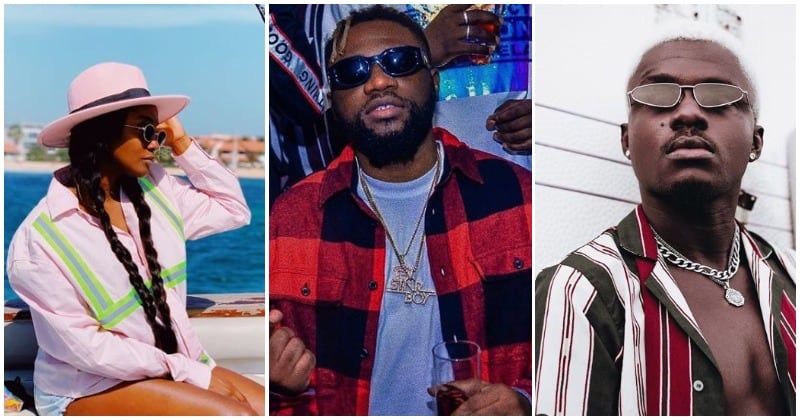 Your latest dose of great music from across Africa

We started the week with new releases from Mayor of Lagos, Suté Iwar, AYLØ, Fasina, Mojo, Seki, $pacely, Teni and DJ Neptune as well as newcomer, WhoIsAkinn. Today, Simi opens her account for the year with a charming romantic cut, Mut4y shares the lead single for his joint project with upcoming singer Elhi, Fave blesses us with the full, recorded version of the song that brought her viral sucess, and more.

Around this time last year, Simi dropped her sophomore album, ‘Omo Charlie Champagne’, wrapping up her major label agreement with X3M Music. The singer has since set up her own imprint, Studio Brat, under which she’s been dropping new music. Her new single “Duduke”, is the follow-up to “Selense”, and is a return to the charming romantic sentiments that makes up a significant portion of her catalogue. “I may not give you the world, but I’ll give you what I have”, she sings over Oscar’s groovy Yoruba folk production.

Sir Bastien’s debut album, ‘Mango’, is a triumph of collaborations and stellar curation. On it, the producer and occasional vocalist teamed up with a variety of artists to create a soothing universe. For his first official single of this year, “Kawaii Mami”, he features rapper Lecktrik, who also made an appearance on ‘Mango’ standout, “Take You There”. Together, the two showcase their chemistry once again, this time for a bubbly cut. Sir Bastien lays down psychedelic guitar riffs and thudding drums, while Lecktrik delivers a playful set teasing and dotting on a love interest.

It is impossible to overstate the importance of social media in amplifying the voice of talented artists looking to cut through all the noise and clutter. Since putting up the now-viral video where she performed a written and un-recorded song over one of the numerous free beats made available by Lagos-based artist Jinmi Abduls, Fave has been attracting the attention of new listeners and industry heavyweights alike. That song, now titled “N.B.U”, is now available for listening in all its finished glory. Even though it is now properly recorded and engineered, Fave’s stunning contralto vocals and songwriting abilities are still the central attraction here, more indication that she’s the real deal and is ready to go whatever distance she wants.

As one-half of the revered Legendury Beatz, Mut4y has shaped the sound of afropop by working with some of the biggest names on the scene. In recent years, he’s also stepped out as facilitator of songs, including the hit single with Wizkid, “Manya” and “Turn Me On” with Maleek Berry. For his next project, he’s linked up with up-and-coming singer, Elhi, for a 5-track EP titled ‘Eu4ria’, which will be available next month. “Bad” is the lead single off the EP, and it establishes the working relationship between the pair. Over Mut4y’s buzzing synths, piano organs and afro-Caribbean drums, Elhi sings of being enamoured by a love interest who might just be toxic to him, driving his vivid imagery with gently soaring melodies.

When Davido challenged labels and collectives to a battle of hits from the previous decade, he did it knowing full well that there aren’t a handful that can challenge his DMW imprint. On the track, Dremo, Ichaba and Yonda tap into the cocky attitude of their label boss on “Double Dare You”. Curated by Studio Magic, the trio take turns to boast of the crew’s acclaim over a springy beat. “30BG is the movement, balling on steady, wetin you wan tell me?”, Ichaba brags on the hook.

Since returning to the spotlight in mid-2019, Minz has kept the streets constantly fed. The singer has been in arguably his most active period yet, featuring on projects by Boybreed, Wani, Ejoya, and releasing a grip of singles and video. His new single, “Quarantino”, taps into the ongoing lockdown situation the world is facing due to Ms Rona, in the most sultry way possible. Backed by ambient piano, wafting strings and mid-tempo bass, Minz states his intentions to isolate with his love interest, using football references to capture the physical desires he’s looking to satisfy once they are together.

Naya Akanji – “Eyes on You”

Naya Akanji has one of those voices that captivates you once you hear it. The singer has only two singles out, but her talent is immediately apparent. “Eyes on You”, her latest release, is a sex-positive cut detailing her infatuation with a crush she wants to get with desperately. “Baby come closer, I’ll make you eat me up like I’m your raw dinner”, she sings in a wispy tone, gliding over the Caribbean pop-inflected production from Lemar Abdul. “Eyes on You” is the lead single off Naya’s joint EP with Abdul, scheduled for release sometime soon.