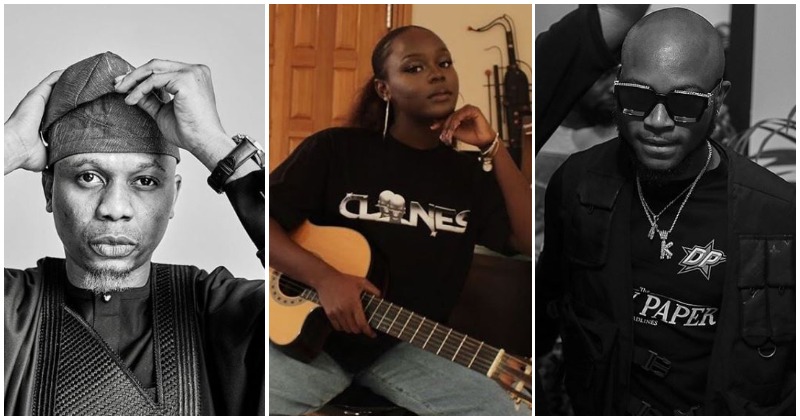 We’ve watched the African music scene grow more expansive and accommodating of different new sounds with the introduction of artists like Tems, Naira Marley, Rema, Ama Rae and others. As a result, it’s hard to predict what the next biggest song out of the continent would sound like. The fast and furious pace of new music releases also makes it hard to keep track of it all so we’ve decided to sort through all the new songs from across all the platforms and subgenres around the continent and curate a “Songs of the Day” column to highlight the song you need to hear. You’re welcome.

Reminisce and Falz have teamed up once more, following their collaboration on “Clap”, a song off Falz’s sophomore album, ‘Stories that Touch’. Their new single, “Prosperity” finds them sharing their thoughts on the meaning of wealth, over Krizbeatz’s flute riff and bouncy afropop drums. Reminisce raps about coming up in the streets and now flying out to go watch football matches, while Falz brags about sold-out shows all over the world and his dreams of bagging an Oscar and a Grammy. Interestingly, both rappers ditched their law degrees to pursue careers in rap, and “Prosperity” finds them toasting to the life they’ve each led up to this point.

Rema’s range is his biggest asset. Last week, he dropped two new, stylistically divergent singles, and both songs are heavy slaps. While the afropop-leaning single, “Beamer (Bad Boys)”, is already getting massive spins on radio and in clubs, “Rainbow” also deserves ample attention. Deevee—the producer behind “Why”—produces the colourful, booming beat for “Rainbow”, and it compliments Rema’s catchy set serenading his love interest. “Rainbow in your eyes when you just smile/ No no I never wanna see you cry”, he sings, with his delivery bouncing between elastic and yodelling melodies.

Efe Oraka garnered her a strong following after several videos of her covering hit songs went viral. Back in 2017, the singer released “Wonderland” with the promise of a debut EP, tentatively titled ‘Magic’, soon after. While that EP has yet to materialise, Efe is still actively making music, as evidenced by her stunning new single, “Zion”. Continuing with her knack for telling relatable, romantic stories over lush instrumentals, “Zion” finds the singer confronting a noncommittal lover, as she charges her honeyed voice with caustic takedowns like, “your ego’s too big and your head’s too small”. M.I Abaga features on “Zion”, playing the role of the prideful but remorseful boyfriend with his closing verse, where he delivers his emotive lines with a stoic cadence.

Last July, King Promise finally dropped his highly anticipated debut album, ‘As Promised’. The Ghanaian singer has stayed busy since then, with music videos for select singles and consistent feature appearances. His latest release, “Sisa”, is his first solo non-album single, and it continues to shore up his image as one of the prime purveyors of romance-inclined afropop. Backed by Guiltybeatz’ bouncy, mid-tempo beat, he sings about a lover he once deemed to be good girl. “You were the sweetest girl, now you move dangerous”, he laments on the bridge, wondering where it all went wrong.

Although he scored a hit with “Alakori”, his collaborative single with Falz, Dice Ailes was relatively quiet for much of 2019, closing out the year with the solo single, “Ginika”. Looking to establish himself this year, the Chocolate City singer has just dropped “Pim Pim”, a catchy and sensual cut produced by Crackermallo. Confessing his amorous affections, Dice pleads with his love interest to never leave or betray him, using onomatopoeic sounds to embellish his lustful lyrics. Olamide features on “Pim Pim”, delivering a mellow, remarkable rap verse with impressive turns of phrase and a few quotable lines.

Ajebutter22 has spent the past few weeks teasing new music and the possibility of a new album sometime this year. Since his last studio album, 2017’s ‘What Happens In Lagos’, Butter has only dropped one solo single—“Lagos Love”—but it looks like he’ll be delivering more of those in the nearest future. His debut release for this year is “Ginger”, a catchy, Mayorkun-assisted single tailor-made for dancefloor audiences. Over Spax’s up-tempo beat and in between Mayorkun’s striking hook, Ajebutter22 admires his lover and declares the lengths he would go to in order to prove his love and protect his woman.

0000
Previous Article Best New Music: Yinka Bernie and Joyce Olong’s reassuring “It’s Okay to Cry” is a song we can all relate to