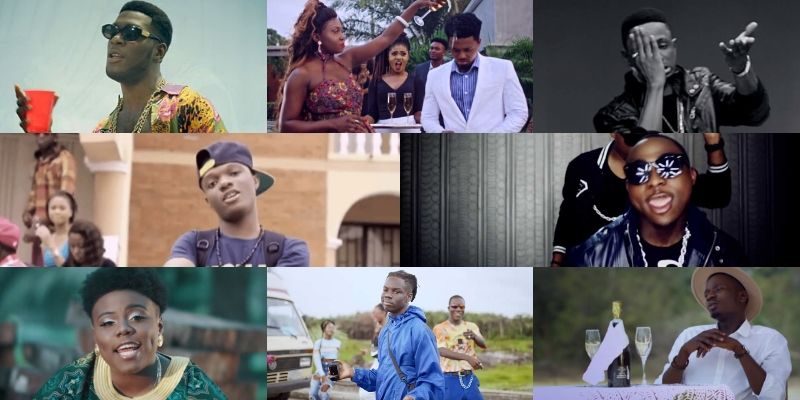 All the breakout stars from each year this decade

The way we consume music has changed significantly over the decade, and this shift in the culture is mainly due to the immense talent we’ve seen over the years. In the 2000s, we saw the emergence of some of the most revered artists today from D’banj and Wande Coal to Psquare and M.I, and as a strong follow up,  we’ve seen a younger crop of artists having their time in the limelight.

Throughout the decade, they’ve risen right to the top of the ranks, from Wizkid charming us with his boyish swag in the beginning of the decade to becoming one of the biggest African artist ever by the end of the decade.

In addition to the clear and immense talent, social media culture has also contributed to these artists’ reach, and they are now able to breakout into international markets as well in a way their predecessors couldn’t quite. Burna Boy is currently on his first global run, Wizkid is recognised all around the world and 2019’s golden child, Rema is on an international tour within the first few months of his breakout.

So as the decade draws to an end, we’ve put together a list of all the breakout stars from this decade.

Breakout song: Holla At Your Boy

It took no time for Wizkid to become the massive star he is today, and that’s all thanks to his breakout song from 2010, “Holla At Your Boy”. When the song dropped, there was no real young artist filling the teenage heartthrob void in the Nigerian music scene, and this instantly made the chantable track a hit amongst young Nigerians, sparking the trend of colourful skinny jeans and plaid shirts we suffered for years.

By the time he dropped his follow-up single, “Don’t Dull”, it was too late for anyone to dispute his talent, and his star has been burning brightly since. Over the past decade, he continued to build on the success by starting his own record label, working with the biggest superstars in the world from Drake to Beyoncé and even rising to the top of the coveted Billboard Hot 100 chart with his feature on Drake’s “One Dance”.

Breakout Song: “Back When”

Not very many people can pull off releasing only one studio album over the span of 8 years, but leave it to Davido to do this and still give us all the bangers nearly every year. When he first made his entry into the scene with the Naeto C-assisted “Back When”, the party starter established him as an artist to look out for.

While the song gained steady traction, it was his follow up single, “Dami Duro” that cemented his status as a hitmaker, and he hasn’t dropped the ball since. Every year since then, he has given us a hit that causes the same raucous on the dancefloor “Dami Duro” would almost a decade after release. In our Issue 002 cover, we spoke about his return back to basics, which has led to the global success he’s currently enjoying, with his album, ‘A Good Time’ already enjoying airplay after only a week of release.

Burna Boy’s “Like to Party” had all the makings of a classic from the moment it was released, and the reception serves as a foreshadowing of Burna’s trajectory. When he first broke out, his self-assuredness was misconstrued for cockiness, and gave him a bit of a bad rap, however, he remained relevant by doling out a steady string of quality songs with staying power.

We witnessed him over the years testing out all the different genres as he built his signature sound and identity into what we know him to be today. His cover story on our birth issue tells the story about how Burna Boy took charge of his narrative in 2017, just before releasing ‘Outside’, the fuel to the fire of his current global acclaim.

The Nigerian music scene is fueled by the nation’s partying culture, so it comes as no surprise that the most popular songs cater to our numerous party settings, much like Sean Tizzle’s Sho Lee did when it dropped in 2013.  Although he can’t move the same kind of crowd he once did, his talent is still apparent, albeit wildly underrated.
His debut project, ‘The Journey’, came with well-liked songs like “Perfect Gentleman” and “Loke Loke”, and today, his impact can still be felt as he slowly returns to the mainstream with ear-warming songs like “Gyal Dem”, “Kpro Kpro” and more.

Notable Hits: “No Fake Love”, “Is It Because I Love You” “Lyrically”

YBNL unleashed Lil Kesh with a dance-themed single, “Shoki”, that saw him rise to mainstream acclaim with the remix, featuring Olamide and Davido. The song’s nasty lyrics were marketed to a specific audience that has blossomed to be known as the street, a set of fans still being served by artists like Naira Marley today.

The shock effect of Lil Kesh’s brash lyrics has worn off over the years, however, his reputation remains intact with singles like “Logo Benz” sustaining his crude and raunchy image. For extra measure, he has made sure to feature artists with similarly risqué lyric books like Zlatan and Naira Marley.

Before he became the pop star he is today, Ycee started out as a rapper and earned fans’ respect with “Jagaban”, which became a popular slang after he released the song in 2015. He proved the song’s success wasn’t a fluke through his follow up single, “Omo Alhaji”, another well-accepted hit that confirmed rap fans of his penmanship and built on his reputation as a rapper. His versatile stint was initially perceived as a cute gimmick that allowed him to sing his own catchy hooks without needing a guest feature, but that was quickly rectified when he dropped “Juice” and took the industry by storm with the viral success the song enjoyed around the globe.

Though parting ways with his former label under unpleasant circumstance put Ycee in an awkward position with fans who had watched him grow into acclaim under the label, he has continued to dominate the music scene on his own terms. He just released his first project as an independent artist, ‘Ycce Vs Zaheer’, and his star power is maintained through the hit song from the new project, “Dakun”.

It’s hard to believe that it has only been 3 years since Mr Eazi’s breakout single, “Skintight”, took over the radio and created the foundation for what is now one of the biggest music careers in Africa today. The lightweight highlife melodies of his ‘banku music’ is groovy enough to serve dance floor audiences but also sultry enough to make him a fan favourite despite the initial backlash from Nigerian fans when he showed his preference for his Ghanaian influences in 2017. Two successful projects and world tours later, Mr Eazi has become the toast of the whole continent by taking charge of the tools streaming platforms provide and redefined how Nigerian music is distributed globally through his impressive streaming numbers around the world.

He has also earned the goodwill of fans by using the pull of his platform, Empawa to help promote other upcoming artists like Joeboy who’s currently having a good breakout year of his own.

Niniola charmed the pop world with “Maradona”. The afrohouse song satisfied Nigerians’ thirst for party music but also established Niniola’s confident personality through the lyrics that embodied her sexuality with careless abandon. Delivering sex-positive messages through Yoruba lyrics wasn’t something people generally associated with women in the Nigerian music scene but she broke the boundaries and has since continued to release sensually charged songs to keep dance floors steamy and sticky.

Her debut album, ‘This is Me’, showed her diverse range of influences from R&B to Reggae, but she has shown that she understands what fans want and followed the project with the more afrohouse tunes that make her a regular feature on DJ turntables at parties and on the lineup of big stage concerts.

It’s understandable to see how some would say Teni the Entertainer won over the music industry with the strength of her personality. Her charming sense of humour is reflected in everything she does like her cover story feature on issue 003 of our NATIVE magazine. But while her playful lyrics are catchy and relatable, her vocals are also quite impressive with standout performances on “Obe” and “Billionaire”.

Her fan base has continued to grow at a rapid pace and she took the initiative to go on a world tour earlier this year, where she performed in 3 continents, 9 countries and 20 cities before she had even released her first project. The tour seems to have helped her hone her craft so her music is taken more seriously as her latest single, “Billionaire”, shows immerse growth and maturity that establishes her staying power as a pop star.

Rema has proven that it doesn’t take long to leave your mark on the music world, particularly with all the social media tools of engagement available to us today. He was discovered through his freestyle videos on Instagram before he got signed to Mavins and scored the biggest hit of 2019, “Dumebi”. Releasing 3 EPs within the space of the year was already an impressive feat, but topping charts with each one shows the 19-year-old’s dominance as he continues to grow into a household name.

His sophomore tape, ‘Rema Freestyle’ has proven that he can create music that’s much more intricate and well-produced than the sultry Afropop hit that spun him into fame and earned him a spot on Barack Obama’s list of favourite songs from 2019. The angst-filled trap songs on the tape made him a staple for sad high-schoolers and provides a convenient bridge to appeal to American audiences and explore Nigerian music’s international allure as he embarks on a US tour that has been met with positive feedback.

Next Article Listen to D’banj’s joyous new single, “Everything Is Ok”