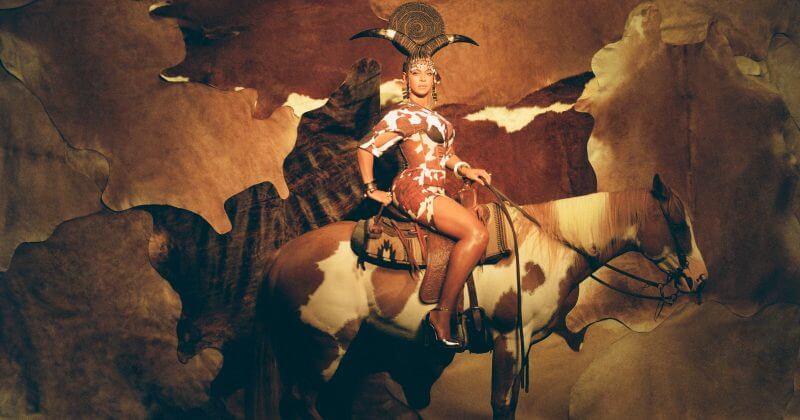 22 years into her career, the internet streets still go abuzz for a Beyoncé drop, with the debut of ‘Black Is King’ – a film directed by the 38 year-old Queen Bey – causing an inescapable ruckus when it was released a few weeks back, still retaining its relevance in news cycles ‘till today. Making its Disney+ debut on July 31st, the highly-anticipated movie was an undeniable celebration of African lineage and traditions. The film not only revisited the continent’s culturally-rich history, revered rituals and identities in multiplicity, but it also showcased a full exhibition of cultural reverence that allowed African people around the diaspora to find joy in their light, and to be seen. The treat in store was a visually stunning display of black excellence in all fashion forms, with many people enthralled by the dreamy sequences of scenery, such as the sharply styled “MOOD 4 EVA” highlight – which also included Hip Hop royalty, Jay Z rolling up to a mansion in a crisp Rolls Royce, and Beyoncé’s diamond encrusted teeth being brushed by a white butler while draped in a silk dollar-print robe by Duckie Confetti.

In the days following the film’s release, social media was rife with credits and congratulations to the innumerable African creatives that contributed to the creative direction of ‘Black Is King’. As talents such as, dancer Papi Ojo (who led Beyoncé in dance on “ALREADY”) and stylist Daniel Obasi (responsible for Tiwa Savage and Mr Eazi’s looks in “KEYS TO THE KINGDOM” and Wizkid’s “BROWN SKIN GIRL” feature) received high praise for their work, fans were quickly learning that key members of the film’s production team included creatives from the African diaspora as well. 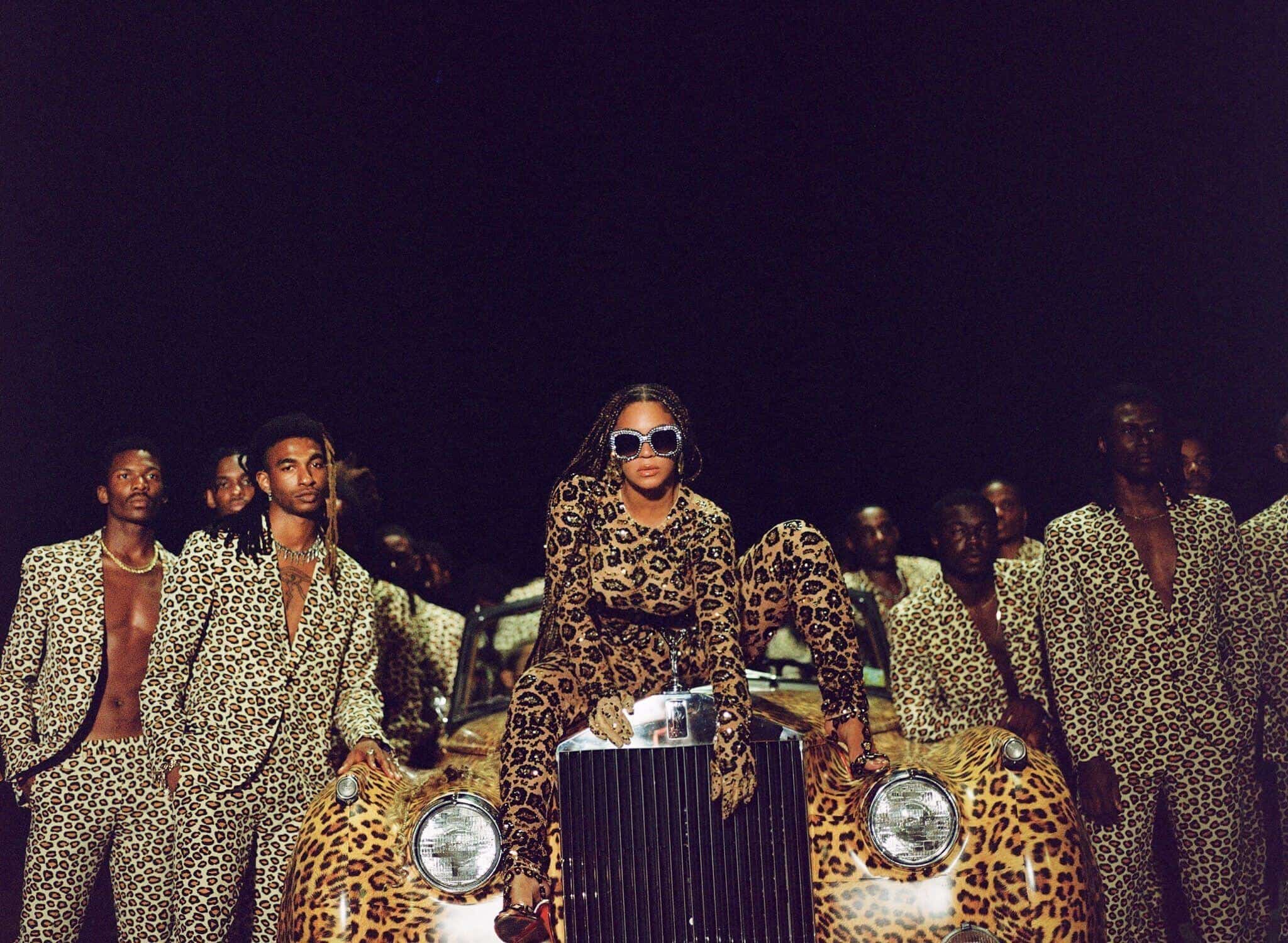 Unsurprisingly, the Caribbean also made its creative presence felt in Black is King – with undeniable influence taking shape in such iconic moments as the life-sized chess board scene featuring avant-garde looks from Simon-Hartman London in “MOOD 4 EVA”, or the stunning 2-piece set on a sultry Queen Bey which distracts from Burna Boy’s visual absence in “JA ARA E”. Taking an audacious step into a fictitious world of next-level fashion and beauty inspired by The Lion King movie, celebrity costume designer and wardrobe curator Zerina Akers and world-class hairstylist Neal Farinah formed a part of the production team that brought their collective genius to the project, injecting their own unique understanding of real African culture through their powerful Caribbean experiences.

A region of breathtaking islands some 7,000 miles west of Africa, quietly nestled in hypnotizing crystal blue waters with picturesque landscapes, the Caribbean Islands are popularly known for our enchanting “sun, sea and sand” tourism appeal. Notably, the Caribbean also has a heavy dose of African ancestry littered across the islands, further dynamized by our English, French, Spanish, Dutch colonial influences. From The Bahamas clustered in the North with their “Junkanoo” tradition, to the twin-island Republic of Trinidad and Tobago in the southern part of the island chain with its annual Carnival celebrations known as “The Greatest Show On Earth”, our culture is punctuated by the traumatic history of the Transatlantic Slave Trade – making this space profoundly multicultural. This complex cultural heritage and Afro-Caribbean familiarity and identity is what informed both Zerina Akers and Neal Farinah as they animated the ‘Black Is King’ film with their eye-catching handiwork.

Neal Farinah is a certified celebrity hair doyen who has been styling Beyoncé’s hair for over a decade. Speaking with me about his first inkling of what was to come, Farinah reveals that Mrs. Carter explained the concept of ‘Black Is King’ to him after a 2am on-site job, which she excitedly described at the time as “her baby”. As she showed him various references to African hair during their conversation over a year ago, he recalls being mind-blown by her inspirational ideas, but ultimately realising that the proposed workload was a massive undertaking that would require a skilled team of hairstylists who needed to be equally passionate about hair. Creating 40 varied wigs with intricate styles and hues in less than a week for a movie set is no easy feat – but that’s exactly what his team was able to achieve. 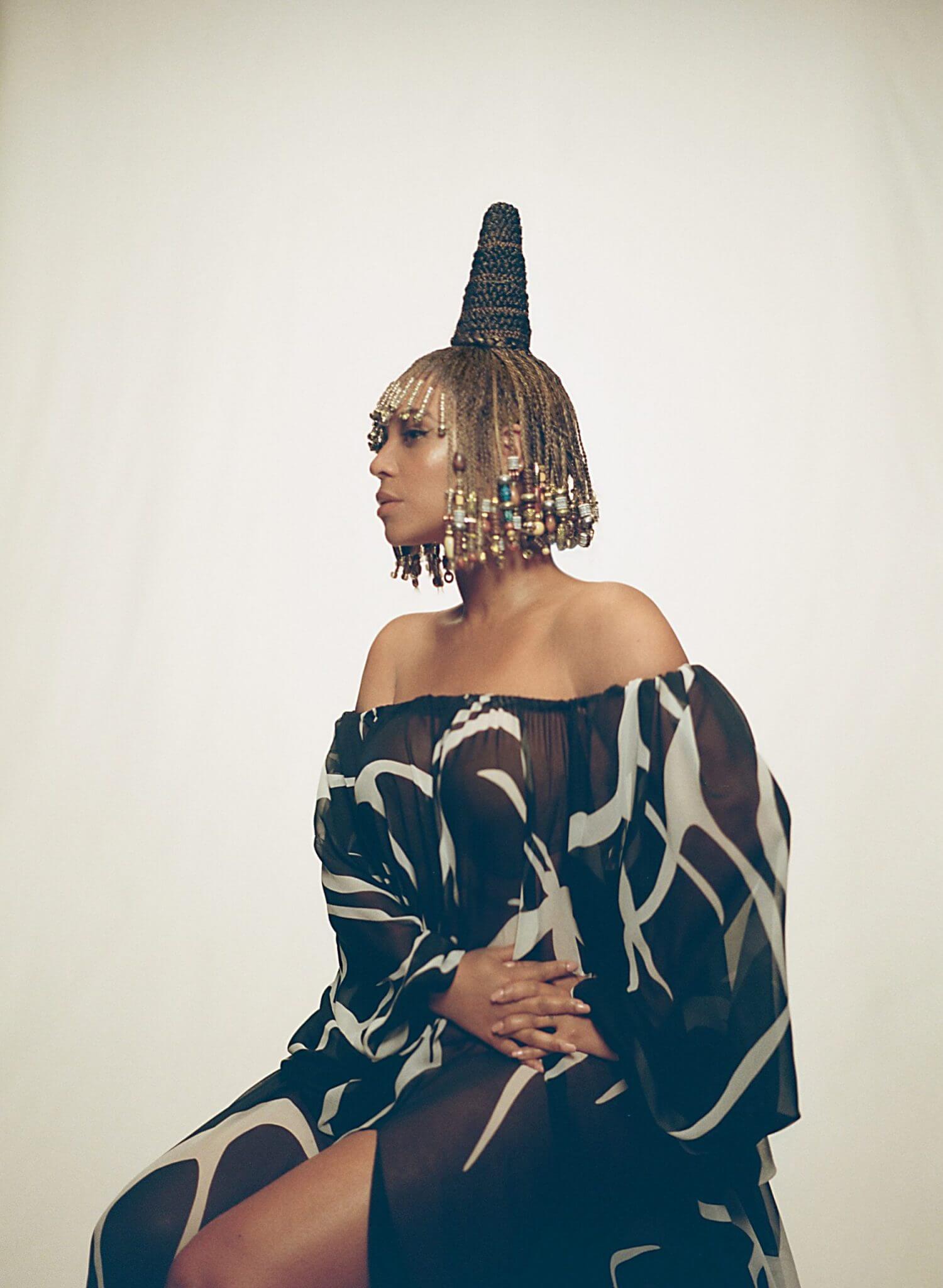 “What I love about Beyoncé, is that although she’s my boss when we’re working, we have a friendship. She gives me a platform to share my creativity, speak on (black) culture, and she’s always coming with something new and different. And I love that innovation about her because that’s who I am as an artist.”

“It was such a diverse team, all black, all powerful” Farinah gushes about working with a hand-selected team of hairstylists such as Xia Charles, Keinda Samuel, Kendra Garvey, Kamilah Gerestant, Nakia Rachon, Nicole Newland, Safiya Warner & Tashana Miles. Farinah worked meticulously to achieve his aim of broadening the dialogue on the customs and depictions surrounding hairstyling in the film, by paying an authentic tribute to a number of tribes in Africa that he would have learned in his own extensive and diligent research. “I had to have the best of the best, and I wanted to share that pie with everyone,” explained Farinah. The journey also helped him connect the dots to black hair in his own Caribbean heritage.

“Being a hairstylist raised in a multicultural country as Trinidad and Tobago, these ‘Black Is King‘ hairstyles meant something more. It was spiritual, it was generational power, it was respect and deeper than I ever imagined.” 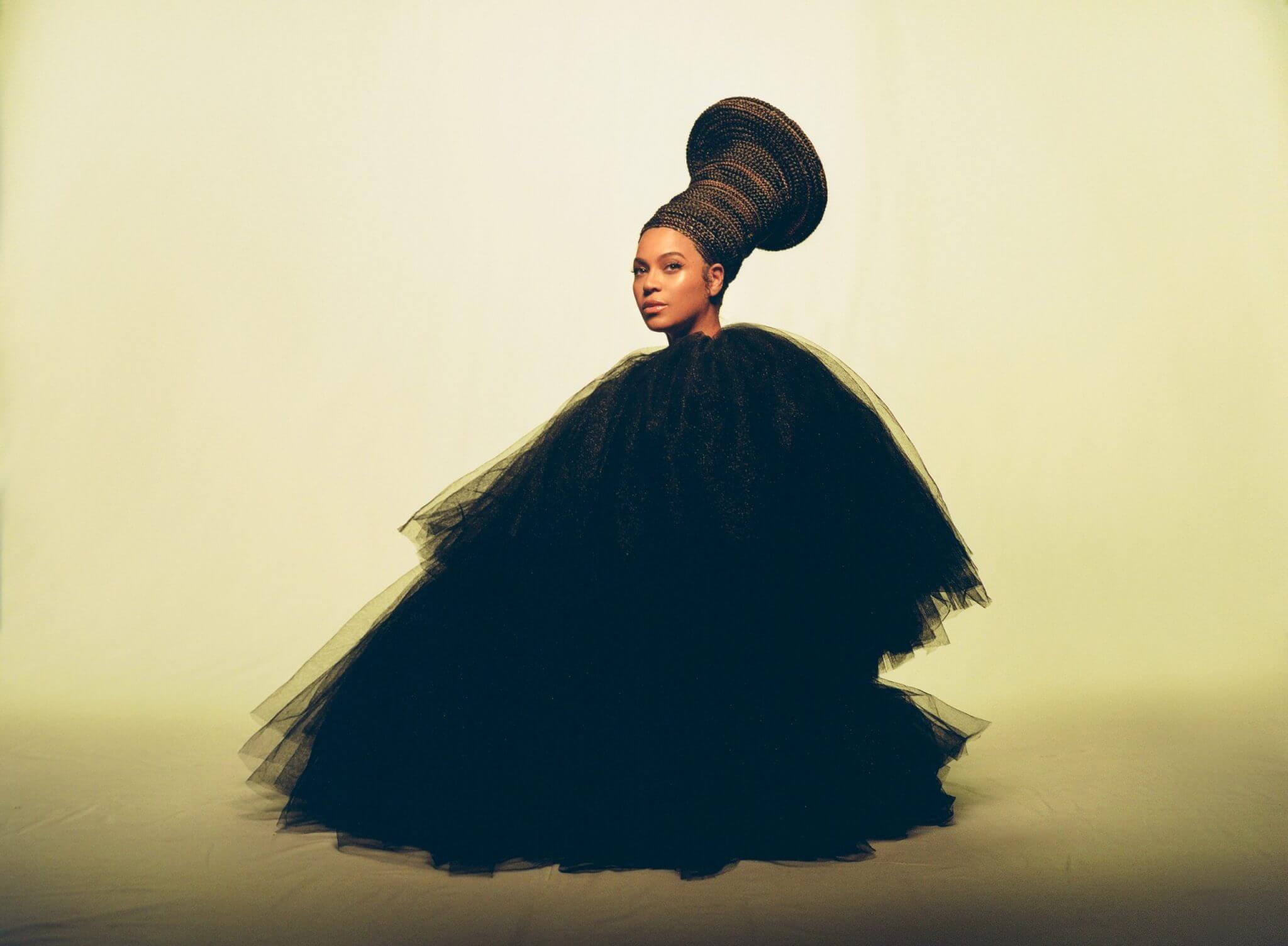 Wardrobe Stylist Zerina Akers praises Farinah as a longtime collaborator on a number of projects, explaining, “Over the years, I love how unapologetically himself he is at all times.” For her, calling on Caribbean creatives for ‘Black Is King’ – including London-based designer Melissa Simon-Hartman and the talented Tobagonian tailor Delia Alleyne – introduced a new wave of iconic ingenuity to the project. Referring to her as “a godsend”, Akers credits Alleyne for a number of memorable looks, including Beyoncé’s psychedelic opening outfit for the “JA ARA E” visuals, and Tierra Whack’s ominous cape in “My Power”. While Trinbagonian-Ghanaian designer, Melissa Simon-Hartman got credited for the custom-made black and white chessboard looks for the “MOOD 4 EVA” scene. The work ethic of her peers seems to be an intimate reflection of Zerina’s own Caribbean identity.

Always an advocate for clients and peers expressing their authentic selves through fashion, Zerina proudly admits that her Caribbean heritage has immensely shaped her styling skills. “I was never above working for free – [at the start of my career] I worked with many different stylists on many different shoots and I just took my time and learned,” says Akers. Speaking lovingly of her maternal lineage Zerina credits her own determination to succeed to that “Caribbean grit”. She also credits her Panamanian grandmother with teaching her how to sew – a Caribbean tradition which is often handed from women to their young girls.

“Having that upbringing has opened my mind to many different worlds; I would not just bring things home, but I would take things and ideas from my Caribbean home and bring it out into the world. It’s motivated me to get out there and do it, the good work.” 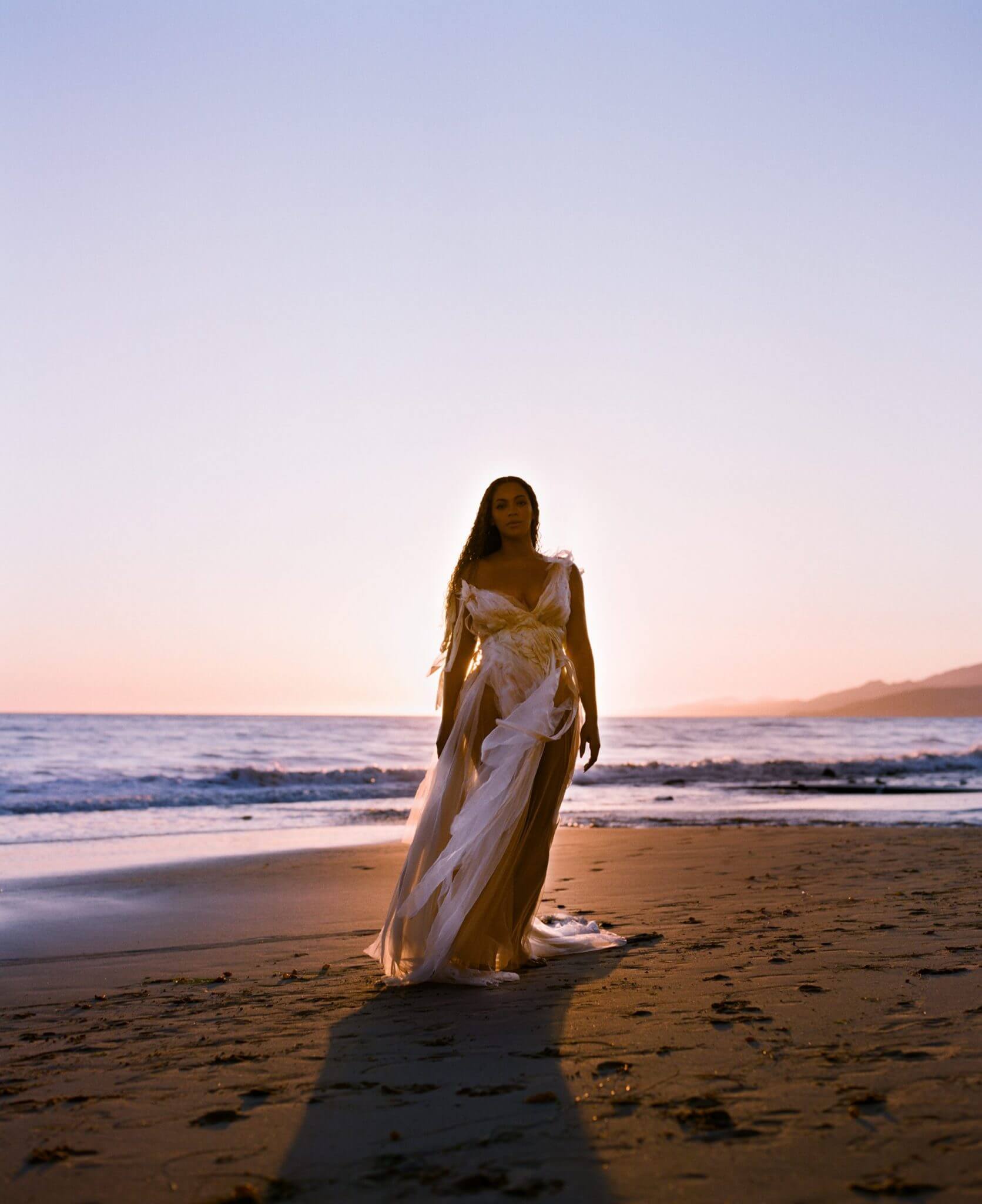 Following an overseas assignment in South Africa for Beyoncé’s Global Citizen Concert in 2019, Zerina admits that her creative eye was elevated from that single travel experience. She explains that she was able to bring depth to several ideas, such as inspiration from the award-winning work ‘For Coloured Girls Who Have Considered Suicide/When the Rainbow is Enuf‘ by playwright Ntozake Shange, as well as 90’s inspired Versace campaigns. Armed with extensive research, conducted alongside Creative Director, Kwasi Fordjour, Akers’ goal was clear ahead of production for ‘Black Is King’. She strategically set out on a monumental task with a desire to honour African culture as opulent and timeless, which led her to connect with a number of designers throughout Africa and the diaspora who would add value to the overall vision of the project. In Zerina’s eyes, African lifestyle is the epicentre of fashion – at the intersection of luxury and individuality.

“I wanted to pull inspiration from traditional African cultures to contribute to the narrative and to connect that with the diaspora. So we have the design, the designers, but then we have the ghetto. And not to say that’s all that we are, but that’s where the heart is.”

Setting out to explore new silhouettes, colour combinations and textures that were still visually familiar to Africa, Akers collaborated with an assortment of creatives for ‘Black is King’, such as Senegalese designers Adama Paris and Tongoro Studio, who appear in “BROWN SKIN GIRL”; art dealer Twiga Mbunda, who decorated “ALREADY”; American brand, Lace by Tanaya, spotted in “FIND YOUR WAY BACK” alongside a signature Egyptian-inspired headpiece forged in collaboration with Akers and couturière Natalia Fedner. In addition to sourcing the pieces worn, she also created a signature Egyptian-inspired headpiece collaboration with couturière Natalia Fedner. If fashion were a sport, then the end result of this style ode to Africa that is ‘Black Is King’ is olympian – careful, deliberate, game-changing and authentic. As with any medal ceremony, Akers has a top 3:

“The Valentino on the car with the all-leopard in “ALREADY”; Timothy White’s huge black gown from “BROWN SKIN GIRL” when Beyoncé is down in the cocoon and then she stands up, and then the floral tea party scene, not just her look but the entire scene – those 20 or so looks – that was just one of my favoUrite things to style.” 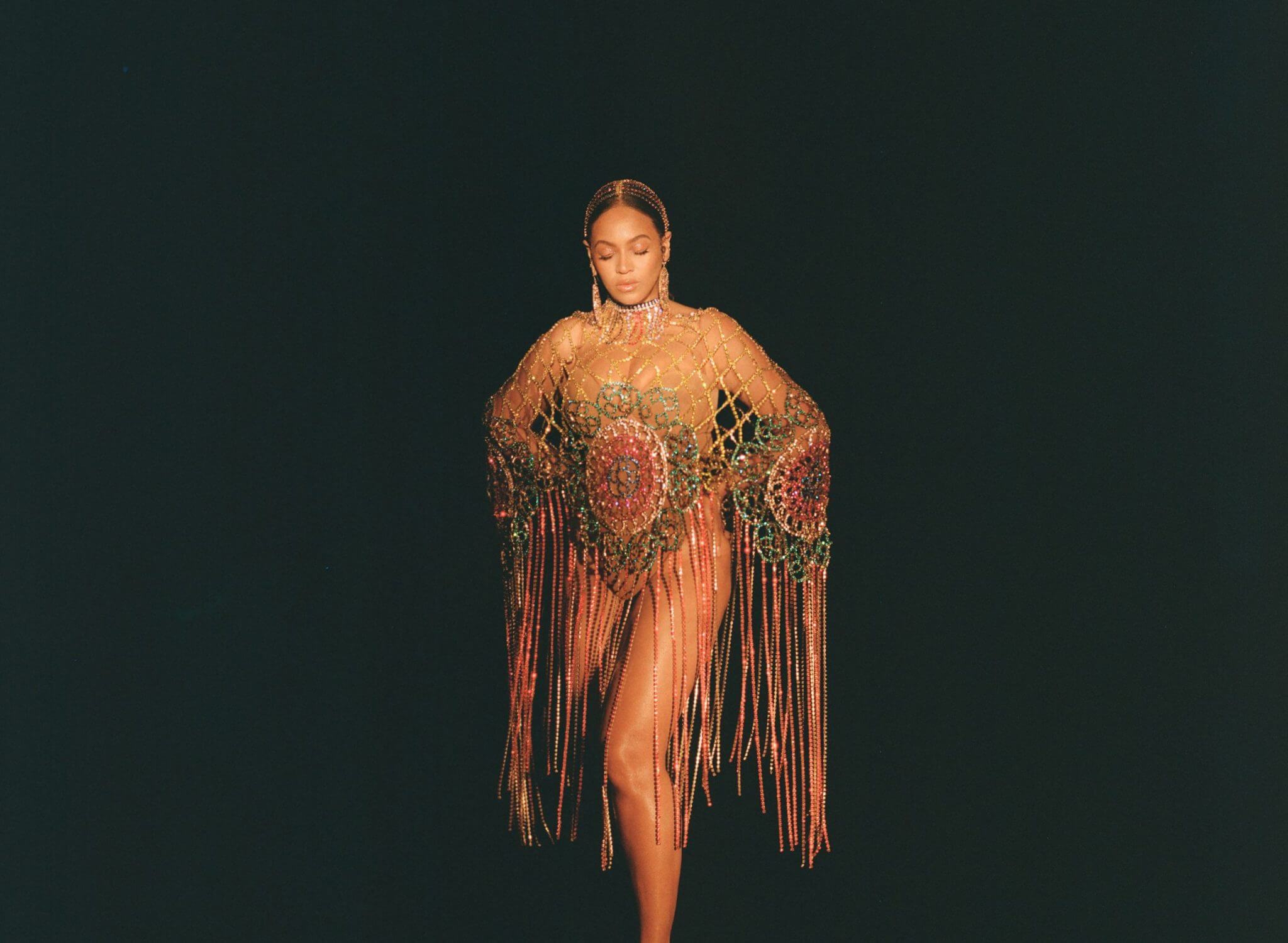 Beyoncé wears Area in “FIND YOUR WAY BACK”

In their own career film reels, ‘Black Is King’ is etched as an unforgettable highlight in the professional lives of both Zerina Akers and Neal Farinah. The Caribbean consciousness is at the forefront, centring their own lived experiences as African people.

Asked about “when the noise subsides” from the film’s current buzz, Zerina trusts that ‘Black Is King’ will leave Caribbean people with a burning desire to explore African culture and spirituality with a greater sense of entitlement and assurance. As Africans celebrate having their own people share their own culture through their own narratives, Zerina wants her Caribbean kin to enjoy the same delight:

For Neal, this is a moment to celebrate Caribbean joy, while recognising that a new journey has begun for his own award-winning career.

“Anything is possible in life (…) in helping to pave the way for other young artists from the Caribbean, I’m just rolling high and celebrating for all of us.” 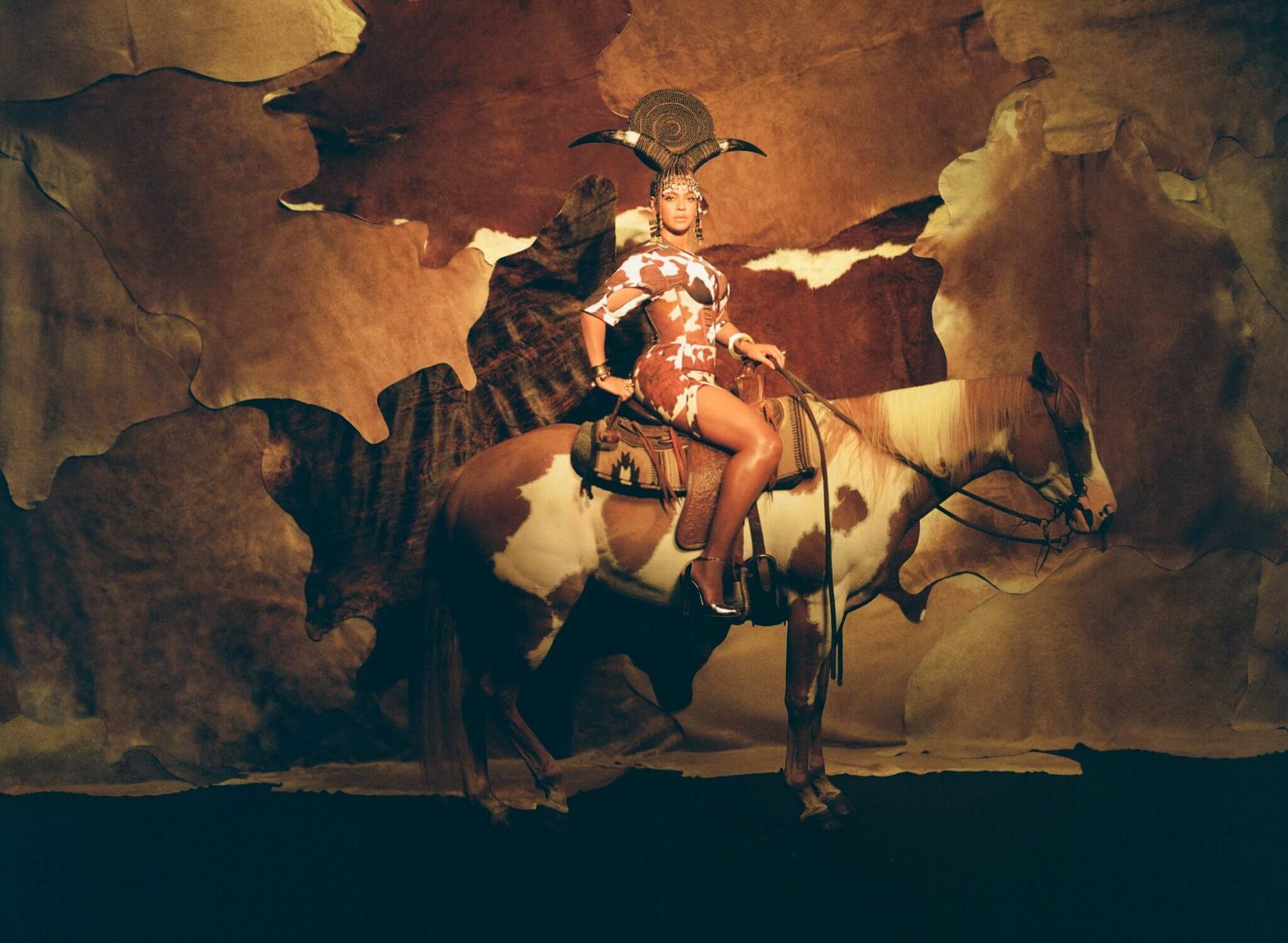 Tenille Clarke is an avid wanderlust, Carnivalist, cultural enthusiast and publicist who pens about her ongoing love affair with travel, culture and entertainment through a Caribbean lens.

1101
Previous Article The Shuffle: That time Darey teamed up with Chamillionaire on “The Way You Are (Remix)”

Next Article Songs of the Day: New music from Darey, Crayon, SOLIS and many more