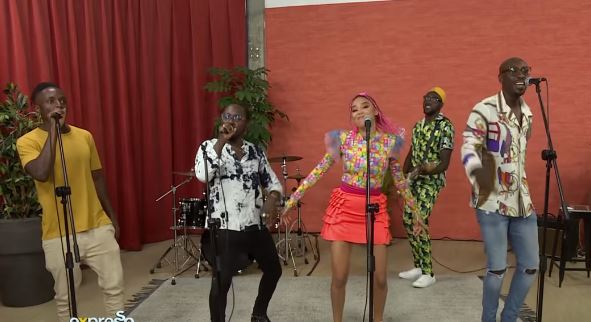 Sauti Sol’s “Disco Matanga” is the lead single and only newly released song on the playlist, featuring South African artists Sho Madjozi and Black Motion. Featuring swinging bass and whirring synths, “Disco Matanga” is cut from the bombastic cloth of South African House, and it captures the forward-moving and sometimes chaotic energy of “Queen Sono” through the boisterous vocal performances from the artists involved.

Boybreed closed out last year with, ‘Made In Tropics’, their 7-track debut EP chockfull of feel-good, afropop-dancehall hybrid tunes. Opening their account for the year, the sibling duo has linked up with veteran producer, E Kelly, for a joint single, “No Secrets”. Over the years, E Kelly has shown his compatibility and range with his extensive list of production credits from Mr Eazi to Yung L, and he continues his streak on “No Secrets”, playing to the strengths of his collaborators. Over light piano keys, xylophone riffs and mellow afropop drums, Boybreed demand straightforward dealings from their love interests, channelling their lack of trust through melancholic lyrics delivered with earworm melodies.

A few weeks ago, Efya introduced her alter ego, Big Dragon, and she’s been sharing new music ever since. “Spinning”, her latest single, mines her soulful sensibilities for a nostalgia-induced song. “I just wanna go away to the times when we were young”, she sings on the first verse, rueing the complications that come with growing up but ultimately accepting that it is what it is. Big Dragon is joined by Kiddblack on “Spinning”, and the Ghanaian rapper drops a stunning verse reminiscing on the frivolities of the past and highlighting the difficulties of the present. Their musings are anchored by earthy neo-soul production, comprising soft piano twinkles, bass guitar flourishes and jazzy drums.

Being a DIY artist suits ICTOOICY’s prolific recording and release cycle. Over the weekend, the self-proclaimed ‘poet with a flow’ dropped her latest project, ‘Sorry I Don’t Like Phone Calls’, a 7-track EP that continues her process of self-examination. Of the impressive set of songs, the Kiyo-assisted “Lights” is an instant standout, as it balances IC’s expressiveness with a perception of herself as a flawed, growing individual. “Fighting with what’s inside of me, fighting with the people that once loved me, but now they only lost at sea”, she dryly recites in the beginning, closing out with the declaration that she’s doing the best she can. Kiyo also matches IC’s self-lacerating direction over the murky, lo-fi trap beat, spitting a striking verse where he refers to himself as a lazy youth mainly because he’s “been feeling hella lost”.

Following the release of $pacely’s debut project from last October, ‘Fine$$e or be Fine$$ed’, Nxwrth is the next La Meme Gang member to release his first solo project. ‘NASA: Thanks for Flying’ is the title of Nxwrth’s debut, and the 12-track project will be released on April 3rd. “Sundress”, the latest single off ‘Nasa’, is the latest indicator of the delightful genre-bending style that will be guiding Nxwrth’s coming project. Over a dancehall-meets-EDM beat, Nxwrth and his La Meme Gang colleagues, $pacely, Kiddblack and Darkovibes, admire the features of their love interests and express their undying affections, accenting their romantic lyrics with syrupy melodies.

Over the course of growing catalogue, Atlanta-based, Nigerian singer-songwriter Toye has shown a knack for making bubbly, romance-themed songs. Toye’s latest single, “Ansa Me”, is probably his best effort yet, as he explores the breathy side of his voice for a song that is both sensual and club-ready. “Iwo ni mo ni (you are the one for me), if no be you tell me who e go be”, he sings, artfully embellishing his fuji-inspired melodies over a catchy mid-tempo beat.

0000
Previous Article For The Girls: Lose yourself in Olayinka Ehi’s hypnotic sounds