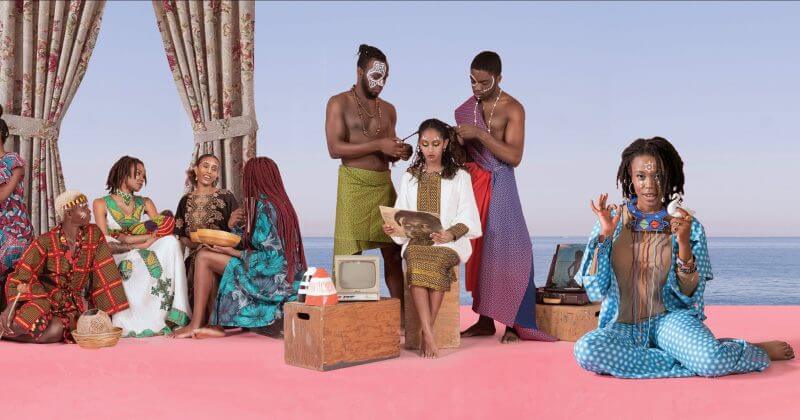 Today marks one year since Lady Donli dropped the — ‘Enjoy Your Life’ a 37-minute tape which gives us the right ammunition to do as instructed. You can’t listen to EYL, as Donli has permitted us to call it, without feeling uncontrollably cheery, an effervescent feeling we can thank not only the President of Enjoyment herself for, but also her roll of well-endowed featured artists.

Offering us the mandate to Enjoy Our Lives right beside Lady Donli, Tems, BenjiFlow, SOMADINA, Amaarae, VanJess, Tomi Thomas, SOLIS and The Cavemen were all fundamental figures in forging this memorable project, and their contributions have been all over our minds as we celebrate the anniversary with Lady Donli. So, to commemorate the year since the release of Enjoy Your Life, we’re taking a look at what the year has looked like for Lady Donli’s Cabinet, and how they’re following their own policy to ‘Enjoy Your Life’.

Tems was fresh off the release of what would become her most defining number, “Try Me” when she appeared on the highly anticipated ‘Enjoy Your Life’. Featuring on the album’s fourth track, Tems’ magnanimous vocals on “Good Time” demands that every ear it touches “feel alive inside” as she professes on her opening verse.

Since that “Good Time”, Tems has enjoyed many more as she rapidly rose to stardom, becoming one of the most covetted Nigerian artists with only three official singles accompanying her impressive collection of features. With multiple spots on Show Dem Camp’s December drop, ‘Palmwine Express’, Tems hasn’t let up this year either. Though she’s only released one single this year, the melancholic “These Days”, Tems has assisted – some might even go so far as to say carried – potent records this year, from Odunsi’s April throwaway, “Decided”, to Khalid’s “Know Your Worth” remix. “I’m not even at my best currently” our TIME issue cover star professes – but she sure seems to be enjoying life to the fullest.

BenjiFlow’s contribution comes up on the album standout, “Take Me Home”. Sauntering in on the second verse BenjiFlow’s seductively smooth take puts the sexually in Lady Donli’s apparently intellectual request to be taken home. Releasing his first body of work back in March, the r&b sensation has kept the very same ‘BENERGY’, professing his unyielding love a dying dedication to the object(s) of his desire through the largely self-produced amalgamation of vibes. Leaning into Latin instrumentals on “Somebody”, Alternative flows on the closing “Broken Parts”, and Afropop intonations merged with electronic synths on the project opener “Wonder Girl”, BenjiFlow is enjoying his musical range, and it’s something for the fans to enjoy too.

“FLAVA” is the ultimate feeling yourself record. After Lady Donli chants the self-affirmative chorus over The Cavemen’s enchanting beat, SOMADINA ushers in a silky, well-articulated and undeniably ensorcelling first verse, featuring a favourite quotable, “don’t accept apologies unless it’s monetised” and some wise words encouraging us to feel okay in out vulnerability “sometimes tears dry but it’s alright”.

SOMADINA is a singer that is incredibly in touch with her emotions. Speaking with us in our REBEL issue last year, SOMADINA revealed that her “music speaks to everyone and anyone who can relate to pain, [but] it also speaks to me – that’s the most important thing.” Vulnerability isn’t a weakness for SOMADINA but a source of strength, of influence and nothing makes that clearer than her debut body of work, ‘Five Stages’. Juggling a Sociology degree – she’s between her second and third years now – with a budding music career, SOMADINA hasn’t been so active since the coronavirus threw us all into a tizzy, but we’ve got ‘Five Stages’ to get us through so all we’re hoping is that SOMADINA is enjoying her time away from the weighty demand of constant releases.

Amaarae on the other hand is loudly and proudly preparing for something big. Gearing towards her forthcoming project, ‘Angel You Don’t Know’, Amaarae has stayed relevant in news cycles throughout the year, recently with the trippy animation for the isolation anthem, “Leave Me Alone”, or her new feature on Rvdical the Kid’s “NASA” and earlier in the year her mindblowing verse on the sensational “body count”.

The Sexy Savage delivered a similarly as incredible verse on “FLAVA” last year. Referencing one of Lady Donli’s early hits (“you’re sweet like ‘Ice Cream’”), and Burna Boy’s collaboration with Lily Allen (“Like Lily I’ll lead ‘em straight to ‘Heaven’s Gate’”)Amaarae’s performance on “FLAVA” encapsulates her multiple talents as she flexes her vocal chords and flaunts her perfect pen as she rapidly fires through boastful bars. A lot has changed in the year, but Amaare’s quality certainly has not – that’s one constant we can all enjoy.

Crossing borders with their contribution all the way from California, sister duo VanJess so effortlessly melded with Lady Donli’s exuberance on the traditional leaning bop, “Corner”. Their vocal contributions all but indiscernible, opening the standout number, VanJess refuse to be played. Lady Donli later on in the track affirms that people try her too often, but as early as the first verse VanJess let us know that that won’t be possible, they’re not fools and you’re on their own terms.

Still doing things on their own terms, VanJess have enjoyed a spree of collaboration in the past year, lining up features with every soulful voice you can imagine, from Ari Lennox, to Masego, to TikTok sensation Ant Saunders on the delectable “I Had A Love Song”, a Friday release that you absolutely must get into.

Tomi Thomas – “With The Kindness”

Formally known as The Forbidden, Tomi Thomas and Lady Donli are and undefeated combination, because their talents are both so astounding and their musical prowess enviable. “With The Kindness” is an energetic good-spirited track that politely puts the middle finger up at every hater. Stealing the show with a breathtaking bridge, Tomi Thomas absolutely annihilates his opps, with kindness sure, but ultimately with unbridled skill.

Perhaps it is because he is soo good that Tomi Thomas remains as sporadic as he does with is musical releases; the fans, his peers, no one would be able to handle regular drops from this supreme talent. Swiftly following the GMK-produced “Lagos” with a triple singles package, ‘Tribe’ from him and L.O.S. crew, Tomi Thomas is enjoying doing what he does best – making good music, plain and simple.

Following up the heavily percussive “Confident” on the double, comes SOLIS’ juxtaposing “Feeling Cool”. With a contribution so good, Lady Donli couldn’t dare touch it, SOLIS sings about reuniting with the perfect love, who at first reignites her fire but ultimately leaves her feeling blue. Though this wistful ending is a little off brand for the unapologetically cheery album, hopeless romance is SOLIS’ M.O, and she will dextrously work that source of her magic into anything.

This time last year, SOLIS was yet to release an official single, but by 2019’s end, the alluring vocalist had two in the bag already. Reverting to her informal freestyle drops this year, SOLIS kept listeners attentive every month, with Instagram TV singles such as “mercury” and “fuck boys kiss girls”, which she has now compiled into a strong throwaway project. Releasing ‘Ruled By Venus, Unfortunately’ to SoundCloud and Audiomack exclusively, SOLIS is enjoying creating on her own terms, she tells us, “With ‘RBV,U’ it was the first time, in a really long time that I was having fun creating music”.

The Cavement – ‘Enjoy Your Life’

Last but most certainly not least is The Cavemen. Given featured credits on “Corner”, The Cavemen are actually responsible for the production of the entire album, credited with bestowing upon the beats the infectious, bubbly spirit they exude. Since their indispensable contribution to ‘Enjoy Your Life’, The Cavemen have been building upon what they had already begun with “Osondu” and “Bolo Bolo” earlier that year, releasing a slew of singles, including the futuristic highlife jam “Anita” in preparation for their debut body of work. The President of Enjoyment has told us that she’s A&R’ed the project so we’re even more excited to see just what kind of enjoyment the band have been getting up to since their first extended play.

ICYMI: THE INCREASING ALLURE OF NON-CONFORMITY IN NIGERIAN MUSIC

Next Article The rise of influencer culture in Nigeria