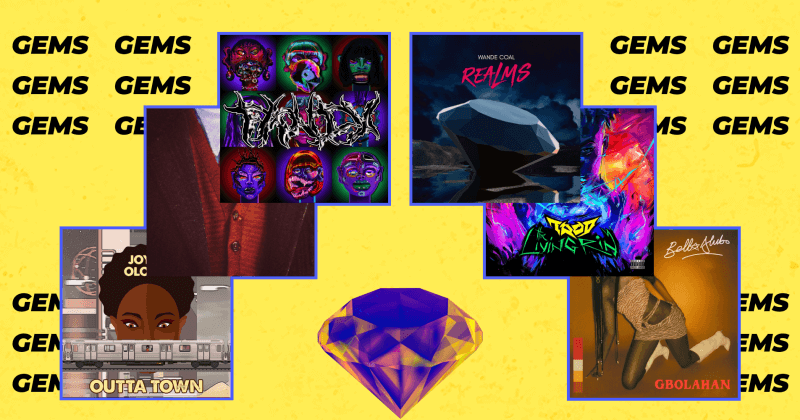 Gems: A List of the best released songs this week

A significant portion of Kimosabe’s music is centred on the vulnerable honesty and carnal tension that happens, specifically at night time, between romantic partners or even just two people attracted to each other. In February, the South African singer put out his quietly impressive third album, ‘Nights, Vol. 3’, and he’s returned to dropping music via a new mini-series titled ‘SoulTember’, which will see him release four songs in four consecutive weeks. “Bagger Vance” is the second drop in the series, a song built on raw desire and unfiltered passion.

Sung with a fervent energy, “Bagger Vance” finds Kimosabe pleading for affection from a lady, a one-sided desperation that would’ve been a bit unsettling if there wasn’t a preceding dynamic. According to the singer, the song is about a guy whose side piece wants him to beg since he won’t leave his relationship and commit emotionally to her. “Don’t make me beg for it, ‘cause you’ve got what I need”, he sings over a sleek R&B beat that echoes the signature sound of legendary American producer, Darkchild.

A combination of his vivid writing, supple vocal runs and intense melodies, Kimosabe dutifully embodies the character of a guy who is creeping around, up to the point you might catch yourself rooting for him. Craft wise, “Bagger Vance” is a remarkable display of why Kimosabe is one of the finest R&B artists on the continent.

With an undeniable legacy as the catalyst behind the explosion of indigenous rap music, Dagrin has served as an inspiration for many rappers who have come after him, but none of them are as on the nose as TROD, whose moniker is an acronym for “The return of Dagrin”. Perhaps due to the undue pressure he put himself under, TROD has floated in and out of public consciousness in the near seven years since coming out, showing flashes of his potential on singles and freestyle cyphers. His new EP, ‘The LivinGrin’, is a better, surefooted gauge of his talent, a solid set that lets listeners into his hopes and dreams.

Final track, “I”, is one of the standout songs on the short tape, a song that exhibits TROD’s ability to frame his personal woes within a universal concept. Loyalty, or the lack of it, is a well-worn topic in hip-hop, with rappers generally deriding those they perceive as disloyal and explicitly considering them opps. TROD buys into this cliché on “I”, but what makes his approach and the song refreshing is that he takes an incisive approach to examining the concept of people having your back, while linking it back to all he’s been through. “Won fe ba mi re’rin but ko s’eni to ma ke fun me (They want to laugh with me but there’s no one who will cry with me)”, he poignantly quips at the beginning of the first verse, bringing to mind Kendrick Lamar’s famous declaration, “Ain’t nobody praying for me”.

Backed by acoustic guitar and a soulful percussion knock, TROD’s raps are given an extra layer of clarity, sounding like revelations brought on by real life experiences; when he closes out the song out with “Oju eje l’everybody wa ni mo se ma n sun pelu ibon (everyone is red-eyed, that’s why I sleep with a gun)”, it doesn’t come across as a cry for help as much as he’s justifying his paranoia. “I” doesn’t hit the same contemplative zeniths like some of his idol’s best songs, but it sounds like TROD is on his way there.

Ghana’s neo-soul pop princess Amaarae is preparing for the release of her upcoming EP, ‘The Angel You Don’t Know’ which is slated for release later this year. Having already shared the sultry single “Leave Me Alone” a few months ago, she’s back with a new genre-mashing single titled “FANCY” to further whet our appetites for what’s to come. Proving to us that all is not lost, and we can still have a hot girl summer despite the tumultuous events of this year, “FANCY” is a trap-style R&B number for all the bad bitches looking to have a great time.

Over groovy drum patterns accentuated with hints of alt-pop, emo-rap, and trap, Amaarae sings “I like it when you call me zaddy/won’t you pull up in my big fat Caddy/I got smoke for a nigga so try me” with an unshakeable confidence that feels very symbiotic to whoever is listening. Speaking on “FANCY”, Amaarae shared, ‘“Fancy is a bad bitch record – it’s that joint that you put on when you’re getting ready to go out, when you’re getting ready to ace that exam, to ask for that promotion, do that job interview, go on that date that you know you are about to dress to kill for! It’s for the BOSS BITCHES.” Evidently, Amaarae is not looking to be constricted to genres or personas and we are loving every minute of it.

After making stellar a appearance alongside Yinka Bernie on the on thought-provoking songs “It’s Okay To Cry”, earlier this year, singer/songwriter Joyce Olong is ready to share her first official offering of the year titled “Outta Town”, the first pre-released single off her forthcoming debut album ‘Silhouettes’.

Over the swelling string harmonies and laidback drum riffs that she self-produces, Joyce Olong sings about the all-too-familiar feeling of being an outcast despite being surrounded by people who claim to know you. ‘They don’t even know, but your life story they narrate/Generalise me/oh they tell me you people are all the same’ she sings, but rather than remain dejected, Olong stays afloat and assures listeners that they can too. Much of the song’s production rests on delicate pianos, and gentle wind instruments, matching the gorgeous and dreary tenor of the lyrics she sings. In a time where we’re all feeling less certain about ourselves and the future, “Outta Town” gives testament to how we can survive through self-reflection, compromise, and ruthless honesty.

Bella Alubo makes silky R&B songs with dramatic and intently personal narrations of her experience with love. Her last single, “Loneliest Girl In the World” was inspired by her struggle while self-isolating in London, and for her latest release, “Gbolahan”, she maps out her path to healing from a failed relationship.

Tuan Malik produced the mellow piano-led afropop instrumentals for Bella Alubo’s charming vocals as she confidently addresses the person responsible for breaking her heart, “Gbolahan”. She opens the song with her drunken voice saying, “Looking fit, pockets thick, really nice, see my smile”, like an Instagram story peek into a good night out. She doubles down on setting the party scene as she goes on to describe how she’s the life of the party; “Afterparty, Afterparty/ Say My Body Is Like A Bentley/ Trying To Love Me Like A Gangsta/ You Want Me In Your Ride/ Want Us To Leave Here Together”.

Though the dance-driven instrumentals encourage Bella’s feel-good depiction of her life, she remains focused on the romance gone wrong as she crafts bittersweet lyrics about how she’s recovering from heartbreak; “Dark Shades On, No You Can’t See Me/ I’m Finer Than The Last Time You Saw Me/ Say My Days Are Nicer Now”. The sense of misery is everywhere on “Gbolahan”, echoing in her reassuring chant adlib, “Nobody do it like Bella”. It’s a song you play to remind yourself you’re too good to be sad over some ‘wasteman’.

Wande Coal has remained one of the biggest pop stars on the continent since he broke out into the mainstream in 2007. He is a constant feature in music conversations thanks to his ability to make endearing R&B ballads as well as unapologetic dancefloor fillers. Though he has proven most efficient when he blurs the lines between dance and googly-eyed romance, on “Check”, he leans into his carefree party spirit to drive away people who only want him for his money.

“Check” is the third track from Wande Coal’s newly released project, ‘Realms’ and it delivers the dancefloor-driven afropop melodies. While Lekka Beats and ScrewFace set a summery ambiance with tropical island-inspired harmonies, Wande Coal sings about the women in his life who “want to hold (him) down”. The song offers some insight into the dilemma of choosing who to be with when it feels like everyone wants to be with you. He asks his muse, “Are you really the one for me?” but goes on to ask her not to check on him; in spite of his indecisiveness, Wande Coal’s catchy melodies allow him to shimmer with swagger as he rides the groovy instrumentals right into our hearts. Though “Check” is imbued with a romantic narrative, its charm is in Wande Coal piercing melodies that have long been his specialty.