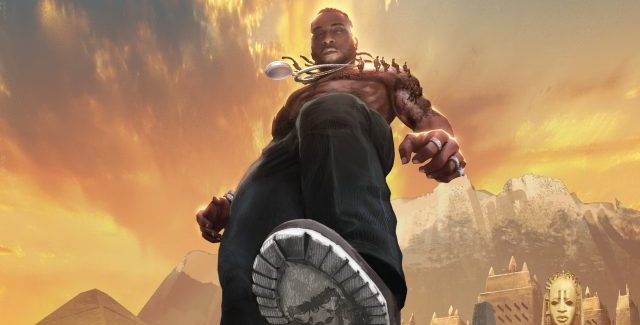 Burna Boy is the living, breathing representation of the popular saying, “we go again.” Earlier today, the afro-fusion singer dropped ‘Twice As Tall’, his fifth studio album and his third full-length in three consecutive years. Since ‘Outside’ dropped in early 2018, Burna has been on a tear, selling out concerts across the world, gracing international festival stages, snagging a Grammy nomination, amongst many other achievements.

Still, Burna has made a commitment to going again at every chance possible, using his prolific streak to cement himself as one of the greatest voices of his generation. In recent interviews leading up to the album release, Burna Boy made it a duty to emphasise that ‘Twice As Tall’ is a continuation of the mission he started with ‘African Giant’ last year – putting on for African pride and raging against colonial structures.

The album’s short, yet extremely intentional roll out shows just how dedicated Burna Boy is to giving his fans the best album experience, even beyond the music; and our clamouring for the album regardless showing just how much his actual music is revered. The result, a carefully-curated, reflective 15-track project houses all the versions of Burna we have become familiar with over his 7-year stint in the game, and after a full day of listening, we have many thoughts.

From the incredible sonic quality to his intricate songwriting, ‘Twice As Tall’ definitely leaves an unforgettable impression. While we get more and more familiar, we’ve put together a list of 5 things that stood out to us, after our first few listens:

Last year, Burna called out the organisers of Coachella for putting his name in small fonts on the digital flier announcing the list of 2019 performers. “I am an AFRICAN GIANT and will not be reduced to whatever that tiny writing means,” he wrote on his Instagram stories at the time. Even though he faced some backlash for his comments, Burna clearly went on to acquit himself – through the music. This time around, the motivation behind ‘Twice As Tall’ seems to be the fact that he didn’t win the Grammy award for Best World Music album, and it’s made clear from the first track where he sings: “I remember I couldn’t level up, ‘cos the Grammys had me sick as fuck, throwing up. Asking questions like, why it wasn’t us?”. It doesn’t take long to shoot right back to his swaggering ways when he reaffirms us and possible himself singing: “tell them, they can’t bury us.”  Since his rebirth, Burna has seized being the underdog, however, through his music, each time, he uses any hint of underappreciation as fuel to drive him to whatever next level he wants to attain.

Burna Boy isn’t afraid of getting real about his emotions. On the title track of 2018’s ‘Outside’, he referenced the currently incarcerated Jamaican dancehall singer, Vybz Kartel, laying out his mother’s—and indirectly, his—fears that he would get in his own way before truly blossoming into a superstar. In the same vein as its intro track, ‘Twice As Tall’ is littered with gripping moments of honesty and introspection, offering us sharp insights into Burna’s mindset as he surveys his surroundings and digs deeper into his psyche. On closing track, “Bank on It”, he spits the gut-wrenching passage: “Anyone of us could have been Pop Smoke, we must go when the most high call us/So I’m paranoid, borderline bipolar/wear my vest and clean my gun up, I ain’t going out breda”. It’s in moments like these, Burna reminds us that he’s human and just like us, he has fears. This relatability, which he communicates pretty well through the music, is his real superpower.

At the same time, Giants are truly invincible

As comfortable as he is with expressing the softness on the inside, there has never been any doubt in the fact that Burna is not the one to fuck with. Bravado has been a constant part of his music, but on ‘Twice As Tall’, it forms the foundation and hangs on the veneer. There’s a shit tonne of boastful moments throughout the album, and rather than just being vainglorious, Burna’s stance is informed by a knowledge of self and an assurance that he’s doing exactly what he’s supposed to be doing.

This is where he shows that he’s a writer’s writer, which is ironic because he’s told anyone who cares to listen that he never puts pen to paper. Many of the greatest writers adopt this method, from Jay Z to Roddy Ricch, and it’s clear that when he’s in god mode, the intricacies of his writing glimmer even brighter. Quotable lyrics such as “I bring the thunder like Muri”, “Used to roll with a shank like Julie” and many more come bursting out of him unabated.

In comparison to the packed line-up of guests on ‘African Giant’, Burna’s new album is sparsely populated by visiting voices, who are all placed to be at their most effective. On “Level Up”, the drums are dropped out for Senegalese legend, Youssou N’Dour’s otherworldly chants along orchestral strings and synths, while Chris Martin’s soft tenor only serves to anneal the rumbling energy Burna dissipates while he’s violently shaking colonialist tables on “Monsters You Made”. Elsewhere on “Time Flies” and “Real Life” he shows off his musical malleability where his synergy with each featured artist and previous collaborators – Sauti Sol and Stormzy.

The stellar assists also extend beyond vocal assists, as Burna gathers an elite army of producers to craft the soundscape of ‘Twice As Tall’. Eleven producers show up on the 15-track project, with multiple credits to Telz, Leriq and Rexxie, while DJDS, Jae5, Skread, Sauti Sol and P2J all snag up solitary production credits. The album also includes contributions from legendary American producers Mike Dean, Mario Winans, Andre Harris and Timbaland. With all these hands behind the boards, ‘Twice As Tall’ is arguably Burna Boy’s most cohesive album yet, sonically; the beats are eclectic, but they all pull together in enhancing the front-to-back listening experience. In addition, the sound quality is phenomenal—there are no noticeable engineering missteps like there were on ‘AG’ with say, “This Side”. The album is great to listen to with good earphones, but you really should try listening to it on good loud speakers.

Get in loser, we’re not contributing to homophobia in 2020

Last week, Sam Smith shared “My Oasis”, featuring Burna Boy, and a section of the timeline was ticked off at an openly queer person who was working with an artist who had expressed homophobia in the past. While there were those who defended Burna with the idea that he’s probably grown past those tweets, the singer might have just handed his critics the stones with which to pelt him with. On two occasions in ‘Twice As Tall’, Burna Boy sings questionable, homophobic lyrics which could quite frankly have been left out to absolutely no effect.“I no be one of those men fear toto, fuck nyash”, he sings on “Wetin Dey Sup”; “But if dem wan fuck you for nyash, make you no lie down”, he says on the Stormzy-assisted “Real Life”.

Both times, Burna takes a swipe at members of the LGBT community as a way of affirming his own personhood, and in turn regurgitates the same retrograde, nonsense thinking that continues to play a role in making life more difficult for queer people all over the world. What makes it even worse is that, he clearly knows better but he chooses to espouse this ideal with zero provocation. For someone who’s publicly proclaimed that he’s fighting for all Africans against the systematic oppression of colonialism, it’s off-putting to hear him express homophobia in his music, and it begs the question of whether he’s truly interested in seeing the end of all forms of oppression on the continent.

ICYMI: WHY YOU MIGHT BE CYNICAL ABOUT SIMI’S APOLOGY TO THE LGBTQ+ COMMUNITY