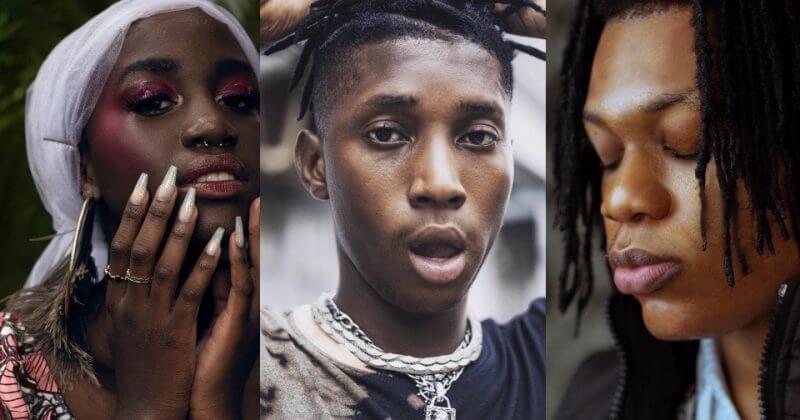 We started this week’s curation for Songs of the Day with the new music releases from; Cheque, July Drama, Straffitti, OBT, Jean Feier, and more. Today’s Songs of the day curation features new music from Kenyan singer, Maya Amolo, Bella Shmurda, JELEEL!, Alpha P, T-Classic, and South African duo, Reece Madlisa and Zuma to keep you motivated as we edge closer to the weekend. You can enjoy them below.

After impressing with her debut project, ‘Leave Me At The Pregame’, Maya Amolo has returned with a music video f0r one of the tape’s standout tracks, “I Know”. She offered an intimate narration of her process, growing out of her bad habits on the r&b tape, and on “I Know”, she detailed the struggle she went through whilst dealing with a bad relationship.

Mumbi Muturi directed the 3-minute long video showing Maya in different artsy set designs. With her classy clothes and rose petal props contrasting the timeworn building the video is set in, the video seems to reiterate the song’s message that she’s too good to keep tolerating an inept boyfriend. The video for “I Know” is the second visual from the tape, after she shared the video for “Lush Green” back in July.

Indigenous Yoruba rappers love to glamorise the tough reality on the street with songs celebrating their triumph over hardship. Though Bella Shmurda introduced us to the soulful, pseudo-spiritual representation of the street lifestyle on his debut project, ‘High Tension’, for his latest single, “Dangbana Orisa”, he embodied street-hop’s pride in overcoming adversity as he sang of his esteem over the laidback beat produced by Rexxie; “Bi Ina Ban Jo, Ogiri O Sa (The Walls Don’t Run When There’s Fire)”.

Directed by Naya Effectz Visuals, the newly released video for “Dangbana Orisa”, shows Bella Shmurda in a desert looking scene where he is surrounded by gun-wielding goons in bullet-proof vests. The scene is reminiscent of Mad Max’s dystopian reality, but we also see cuts of Bella Shmurda performing with adoring fans on the street. The street is rough but with Bella Shmurda’s charm he is still able to find love.

Our Fresh Meat alum, JELEEL! got inspired by racial discrimination for his latest project, ‘Generation Z’. The 6-track EP was released during the protest sparked by George Floyd’s murder at the hands of an American police officer and it offered music as a balm to heal the trauma of the time. He celebrated black power on the 3rd track, “Love BKO”, expressing his rage at the injustice singing “Ima throw a fit just because”. JELEEL! has now released the music video for “Love BKO” and the sci-fi direction reflects his reality as an alien in the racist American society.

The video produced by Ricky Remedy and Aryalion shows JELEEL! beside his alien ship while we also see him making rocks levitate with his mind. While he performs his threatening lyrics, the video represents how institutionalised racism in America vilifies black people as outsiders. Though JELEEL didn’t feature on our series where we, imaginied Nigerian musicians as superheroes, the video for “Love BKO” grants him alien superpowers to make racists pay for discriminating against blacks; “I don’t like that/ You know ima fight that”.

Alpha P’s debut tape, ‘King of the Wolves’ introduced him as one of the teen prodigies giving afropop a refreshing new spin. The 5-track EP highlighted his knack for crafting pop sounds with wistful and relatable lyrics and he continues in the same vein for his latest single, “Quarantine” a sleek r&b number produced by BlaiseBeatz. “Quarantine” channels the ongoing pandemic situation in the most romantic way possible as Alpha P expresses his undying love for his muse; “If you get quarantined today, I’d be there/ Staring at your face”.

Backed by the smooth mix of percussion harmonies, guitar riffs, piano harmonies and harmonized backing vocals, Alpha P’s performance is captivating as he sings his charming lyrics addressed at his muse. He explained to us that, “It’s a very special song to me and I hope it connects with everyone who has experienced this kind of love, a love where you can’t be with your partner because of the lockdown, or the coronavirus.” Love is a compelling emotion that can always be counted on to make romantic songs relatable, but Alpha P takes it even further on “Quarantine” by infusing the topical subject of the pandemic.

Back in July, South African music duo, Reece Madlisa and Zuma shared their 5-track EP, ‘Ama Roto’, exploring the trendy Amapiano sound dominating South African radio. They just released the music video for one of the tape’s lead single, “JazziDisciples (Zlele)”, featuring Mr JazziQ and Busta 929, and the 7-minute long clip shot by RB Media, captures a day in the life of the artists.

The video was shot at their township in Alexandra, north of Johannesburg, showing Mr JazziQ and Busta 929 as they record in a room then head to the street to show off the dance that accompanies the Amapiano sound. They make several stops at clubs and bars where others join them to dance the EDM-fueled music and we also see a cameo from Busiswa, one of the key figures in the South African music scene.

T-Classic’s new EP, ‘Alirat’ is a testament to the singer’s cordial relationship with his label boss, Darasimi Famoyin whose late mother the tape is named after. However, rather than reflect the pain from the loss, T-Classic channeled the grief into celebrating the music that brought them all together. On the opening track, “La Cream”, he delivered a cheerful number to emphasize his confidence in his team; “For life, me and my guys we dey shut it down/ Me and my guys we go paint the town”.

Reward Beatz is credited for producing the upbeat instrumentals that make “La Cream” a sure feature on club DJ sets as he mixes groovy afropop drum riffs with synths and percussion harmonies. The catchy instrumentals serve as the perfect backdrop for T-Classic to bask in his accomplishment as a celebrated Nigerian artist.

ICYMI: Catch up on all the new music releases from earlier in the week

Next Article In conversation with SirBastien, who is looking to add more depth to Nigerian music’s DIY culture