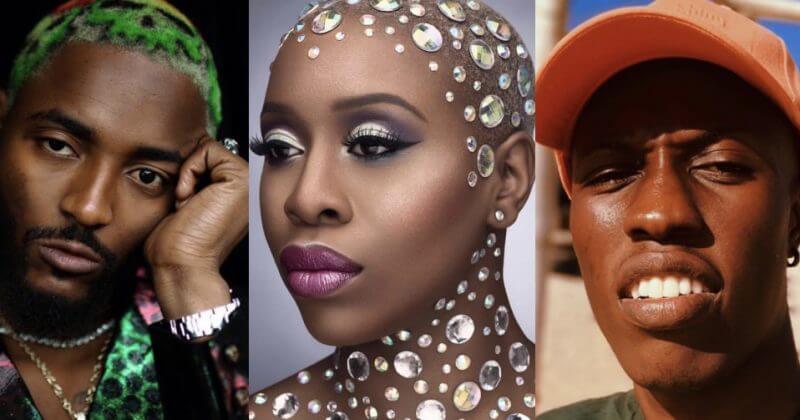 We covered the new releases from Yemi Alade, Jess ETA and SGaWD, Ruhdee and Bella Shmurda, Justin UG, and Rexxie, Zlatan and LadiPoe on our mid-week curation of Songs of the day. Today, we’ve compiled a list of our favourite new releases to set the perfect mood for the weekend. You can enjoy the latest releases from Ghanaian sensation, J Derobie, Del B, Wizkid, Flavour, Walshy Fire, and Kes, Oxlade, Bella Shmurda, Moshoodat and Olayinka Ehi, Mojo, and D-O. Enjoy.

Since breaking out into the mainstream with emPawa-endorsed single, “Poverty”, J Derobie has continued to impress fans with his reggae flow and dancehall harmonies. The song recently won the award for reggae/dancehall song of the year at the Vodafone Ghana Music Award and now, he’s celebrating the accolade with a new single, “Riches”.

MOG Beatz produced the beat for “Riches” with a laidback groove, mixing percussion harmonies, synths and a bouncy drum riff. J Derobie’s rasta-flow matches the catchy bounce of the beat as he celebrates the hustler ambition of people living in the streets; “Every ghetto youth is a star”. The video directed by Wofa Rockson captures the crowd-pleasing vibe of the song as well as J Derobie’s street-savvy as we watch him surrounded by fans while performing on the street.

Before Del B released his debut single as a recording artist, “Boss Like This”, he already made his name as a producer, cooking up hits for A-list Afropop artists like Davido and Wizkid. He continued to show off his networking prowess on his debut tape, ‘Afrodisiac (the mixtape)’, which saw him collaborating with Seyi Shay, Wizkid, Timaya, Davido, Mr Eazi, Flavour, Runtown, CDQ, Dice Ailes, Bam Bam (Ex-Big Brother Housemate) and Moet Abebe. Though the romantic standout track, “Consider”, already had a starstudded lineup, featuring Wizkid and Flavour, Del B just upped the ante even further as he adds Major Lazer’s Walshy Fire and Kes to contribute for the song’s second instalment, “Consider II”.

“Consider II” has a breezy Afropop swing, making it perfect for the summer parties. The lightweight ambience of the instrumentals guide Del B, Wizkid, Flavour and Kes as they try to convince their muse to be their lovers. If you’re ever stuck on how to charm your love interest, “Consider II” is loaded with sweet words that can break down any resistance.

Long live the romantic banger. When Oxlade shared his debut tape, ‘Oxygene’ in March, he showcased the allure of crafting Afropop songs that are born out of both a need to express extreme romantic desires and mission to charm a lover with catchy melodies. The success of tracks like  “02”, where he compares his desire for his lover to his body’s need for air confirmed the mainstream appeal of his dramatic confessions and he keeps up his desperation for love on his latest single, “DKT”.

IsceBeatz produced the mid-tempo beat for “DKT”, mixing Afropop drum riffs with atmospheric synths, and horn samples that punctuate Oxlade’s romantic confessions. Singing, “I’ve been searching for you for a while”, Oxlade appeals to listeners’ emotional sensibilities while his catchy r&b-inspired melodies launch the song into anthemic stratosphere.

After weeks of teasing fans with snippets and posts that hinted at the start of a new chapter in his career, Bella Shmurda has finally released his anticipated single, “Dangbana Orisa”. Earlier this year, he offered up a soulful representation of the lifestyle on the streets with his debut tape, ‘High Tension’ which earned him rave reviews and massive fanfare from fans of indigenously-charmed music. For his new single, he links up with street-hop’s premier producer, Rexxie, who set the laidback backdrop for Bella Shmurda’s Yoruba-fueled vocals about his courage; “Bi ina ban jo, Ogiri o sa(The walls don’t run when there’s fire)”.

Over the dancefloor-friendly instrumentals, he channels his street-smart to make a confidence-inspiring anthem. Singing “Vanessa tell me where you dey, I don come/ You know I’m about to fuck this up”, “Dangbana Orisa” underscores Bella Shmurda’s charm, as he embodies the pride of his indigenous Yoruba culture while still be accessible with English lyrics inserted at intervals.

The piano-led beat for “Goddess” was produced by Nigerian producer, Melvitto and he mixes piano harmonies with head-bobbing 808s to sets a solemn backdrop for Moshoodat’s confidence-inspiring lyrics. Olayinka Ehi also features through her airy crooning that serves as backing vocals, adding an extra layer of glitter to Moshoodat’s celebration of black beauty. Saying, “Can’t believe I got this far without knowing my worth”, she’s claiming her power while also encouraging listeners to do the same.

MOJO’s rap prowess makes him a standout from the rest of the Chop Life Crew band members. His solo catalogue has caught the attention of music lovers who can appreciate his ability to coin vivid bars in Yoruba. On Black Beatz’s “Dobale”, he continues to show off the crowd-pleasing allure of his raps as he was enlisted to deliver the catchy hook and chorus for the club-driven single.

Saying “Olun gbogbo wan learn (They’re all learning)/ The way you carry na blessing/ The way you whine am na talent” over the smooth mix of drum riffs and percussion, “Dobale” is delivered as a love note to a muse. The groovy beat Black Beatz co-produced with Raffy is primed to serve the dancefloor and the newly released video directed by All of Us translates this into a house party set where we see Black Beatz and MOJO partying with beautiful ladies. Though there is a cut scene that shows Black Beatz and MOJO at a cult meeting happening at the same house party location, the song only focuses on appreciating their lovers’.

D-O’s latest project, ‘Wildfire’ brought the aggressive energy we’ve come to expect from our bolshy fave. However, nestled among the 8-track tape of aggressive bravado is “Mentally”, a pause for tender thoughts, where he teams up with WANI to confess his romantic feelings. Though the dancehall-influenced beat Adey produced for “Mentally” already granted the song a summery ambience, the newly released video with a house-party theme can elevate the song to be the soundtrack of this summer.

Prettyboy D-O, Integral Studio and UAXStudio are all credited for directing the almost 3-minute long clip that shows Prettyboy D-O partying with models. WANI is also shown performing his verse to his beautiful muse while we hear both artists relaying their fragile emotions, on the back of organic and minimal Afropop beats. “Mentally” is another romantic banger that makes proves D-O and WANI’s ability to make listeners sweat; if not on the dance floor, then under the sheets.

“Uhp” begins on topic, with Na-Ku asking himself where he’s been and where he’s at, questions on his fans and opps’ lips alike, to which he simply responds, “I’m up”. Two seconds shy of two minutes, Na-Ku’s first verse and only verse sees him switch between him setting the record straight—“Fuck it ain’t losin’, they thought I was down and out”—and him making flirtatious moves towards a girl, despite having a wifey.

Produced by the highly proficient fast-riser, Tochi Bedford, “Uhp” is a moody, yet affirmative record. The message is clear, Na-Ku “don wake” and everyone who thought his seven-month hiatus would be the end has another thing coming—the rapper chants across the outro, “dia papa!”

Next Article Amapiano: The global sound of the South African hood