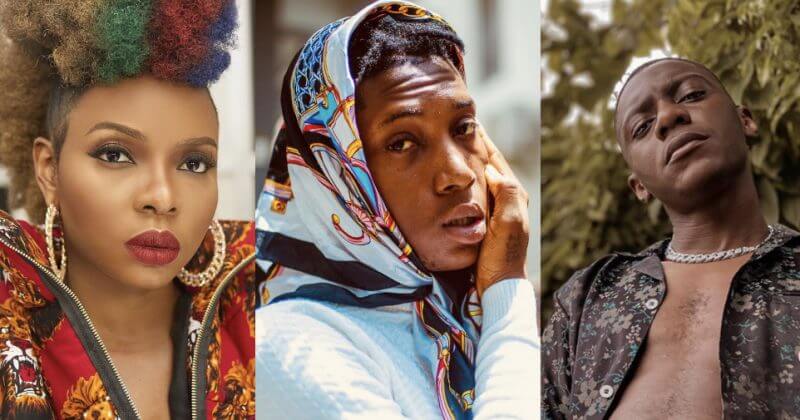 Songs of the day: New music from Yemi Alade, Jess ETA and SGaWD, Ruhdee and Bella Shmurda and more

We started this week’s Songs of the day curation with new music releases from Niniola, Shatta Wale, Moshfire, SirBastien, Ayüü, July Drama and Tosin, and Flavour and Phyno. Today, we’ve compiled a list of all the latest music releases from around the continent that you don’t want to miss out on. Yemi Alade, Jess ETA and SGaWD, Ruhdee and Bella Shmurda, Justin UG, and more have put out new releases and you can enjoy them below. You’re welcome.

Yemi Alade’s consistent work ethic has made her one of the most popular musicians from Africa. Her unwavering dedication to curating her image with cultural references also earned the title of ‘Mama Africa’ and she continues to showcase her love for African style and aesthetics in her video for “True Love”.

“True Love” was released last month as Yemi Alade’s second single since her last project, ‘Woman of Steel’. The Vtek produced song was primed for mass consumption with the mix of catchy dance-driven harmonies and Yemi Alade’s uplifting message about the positive effect of happy music. Singing “DJ play that happy music (forgetting my sorrows)/ Make the people sing-along”, “True Love” encourages listeners to turn to feel-good melodies when life gets stressful as it often does. Paul Gambit directed the video with different shots of Yemi Alade and the casts wearing African print fabrics and other traditional attires that brighten up each frame with colorful designs. The world is in desperate need of positive-vibes and Yemi Alade has provided that with her celebration of African tradition in her video for “True Love”.

Following their steamy collaboration from earlier this year, “Like Me”, Jess ETA and SGaWD have doubled down on their raunchy chemistry with a new collaboration titled “Resistance”. The sexually-charged song is one of the lead singles from Jess ETA’s upcoming EP, ‘Balance’ and it confirms the romantic direction already hinted on the previously released single, “More”, featuring Zarion Uti.

Jess ETA and SGaWD already demonstrated their fluency in rap, r&b and Afropop sounds through their singles and features. However, “Resistance” is the first time all of those music sides—and more—were presented in a singular statement. Though they’re flaunting their wide stylistic range, the focus is on worshiping their muse as they sing, then rap about their attraction to their muse saying, “You’re my beautiful addiction/ I have no more resistance to you”.

For fans who’ve been paying attention to Bella Shmurda’s social media, it seems the singer is gearing to roll out a new project. The first hint came after he started referring to himself as Dangbana and earlier this week, he shared the snippet for a new single, “Sho Ni Cc” on his IG. Though the caption encouraged fans to click the YouTube link in his bio, there was only snippet available on the streaming platform. Despite being upset at the trickery, we’ve remained on the lookout for when it eventually drops. This is how we found his latest collaboration, “Shaye” by Ruhdee.

Nakademus produced the lightweight beat to set a laidback groove for Ruhdee and Bella Shmurda’s captivating melodies on “Shaye”. Ruhdee and Bella Shmurda take turns laying verses about their celebrity lifestyle as accomplished musicians and the video directed by Praise Niphy reinforces their claims by showing them in their flashy clothes and jewelry. We also see the pair performing their vocals, accompanied by two models and a convertible car that serves as proof that they get love and money.

Rexxie’s debut tape, ‘Afro-Street’ showcased the wide stylistic range of the street-hop sound that once dominated the Nigerian mainstream music scene. After highlighting the genre’s groovy appeal, the producer recently updated one of the standout tracks, Zlatan-assisted “Opor” with a remix that featured a new verse from LadiPoe. The updated version has now gotten a befitting video that captures the exciting sound and the energetic Zanku dance that accompanied the sound.

Praise Niphy directed the dimly lit video for “Opor Remix”, and it captures Rexxie and Zlatan performing together in different studio sets while LadiPoe performs in a retro-themed room. The red-lights and color-grading edits allow both sets to fit together as a whole. Just as we observed when the single was released last month, “Opor Remix” shows LadiPoe’s willingness to expand the scope of his music and also shows the depth of Rexxie’s phonebook. LadiPoe’s adaptable flow and his impressive bars have given the street-hop wave a much-needed revival.

Multi-talented internet celebrity, Justin UG has continued to push the boundaries of his creativity. The comedian/ dancer/ MC/ actor is always exploring new mediums to express himself, and has recently tapped into music with the release of his 2-track tape, ‘Vibes with UG’. Both tracks, “Monalisa” and “Bridget” have romantic themes with laidback Afropop instrumentals designed to serve dancefloors. Though they are both worth giving a listen, “Monalisa” is the first track and it stands out as our first time hearing Justin UG’s surprisingly sweet singing voice.

“You say you love me/ Why you come dey change your mind?”, he asks a paramour over catchy drum riffs and soft synth harmonies produced by badthesoundboy. He’s later joined by Nano Shayray who also feels that he’s being played by his muse. Though their airy vocals are performed with the charming allure of a love song, they are both too keyed into their fear of being played to pass their love message across. Regardless, “Monalisa” has a compelling groove built around catchy melodies that are further proof of Justin UG’s chameleonic talents.