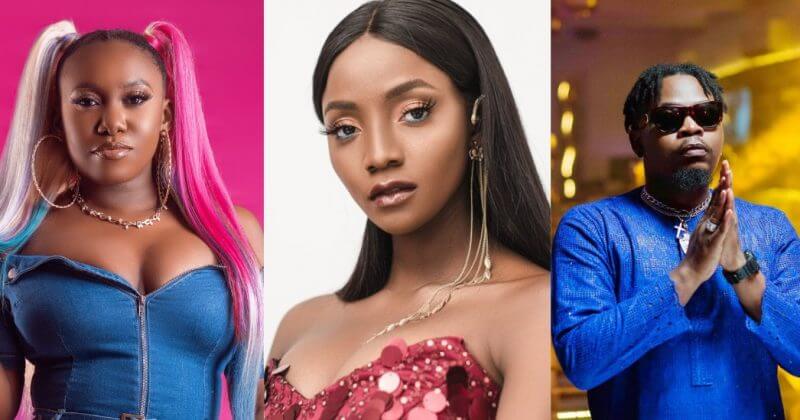 Songs of the Day: New music from Niniola, Simi, Olamide, Mayorkun and more

The undisputed Queen of Afrohouse, Niniola has just released her sophomore album ‘Colours and Sounds’ and it’s ostensibly her loudest statement yet. Building on her hit singles “Fantasy” featuring Femi Kuti and “Omo Rapala”, the newly released project is an afro-fusion affair as she dips further into her genre-mashing bag with help from producers like Timberland, Sarz, and more, spinning hits such as the GQOM-flavoured single “Oh Sharp” featuring Busisiwa and the Shuffle Musik-produced “Look Like Me”.

On “Look Like Me”, the afrohouse juggernaut is full of praise and adoration for her unique self, as she performs an assured set over the mix of Afro-house instrumentals, soulful piano arrangements, and groovy percussion. Taking inspiration from the song’s title, she sings “When I say do this/do this do that/Yes you wanna look like” sparsely inflecting her melodious vocals between the mostly instrumental track. In the video released alongside the single, she’s hosting a range of influences from the comic book era to DC’s Harley-Quinn and we have no choice but to stan harder.

Simi is having a moment for life. Her single “Duduke” was at the height of conversations on social media and the top of the charts earlier this year and since then, she’s shown a determination to put in the necessary work towards making the kind of music her doting audience enjoys – she’s yet to miss. Following her latest single “No Longer Beneficial”, the singer has now shared her highly anticipated EP titled ‘Restless II’ which finds her once again at her best form, exploring the complications of romantic love.

On the WurlD-assisted “Triggered”, she confronts an undeserving lover who’s been taking her love for granted. Over the gentle piano keys, she sings “Psych, boy you weren’t worth the hype/Chai, I fucking wasted my time” airing her romantic frustrations as she soundtracks the pure adrenaline and disappointment that comes from discovering you’ve been longing for someone who’s heart can’t be trusted. His infidelity is like a gun trigger being pulled on her and she doesn’t hesitate to send the accusatory kiss-offs to the receiver. WurlD joins her on the second verse, providing clarity to her questions although his responses are less than satisfactory. ‘You don’t know how to trust me, cause you had enough’ he sings, as he goes on to admit that he’s a different man now.

Street-hop legend Olamide is gearing up for the release of his forthcoming album ‘Carpe Diem’ and so far, he’s previously shared the boisterous new single “Eru” and now “Green Light” to further whet our appetites in anticipation of the project’s October 8th release date. On “Green Light”, he sings directly to a romantic interest, pleading with her to give him a chance to love her in a way only he can. Singing “You say I look like Casanova, for those weh I love, baby I go hard/Na who man no love an him go break heart” he showers his muse with all the affection and attention, trying to placate her doubtful feelings and get the green light from her to ease and release their sexual desires.

Although Tekno’s back catalogue makes a compelling case for crowning him the voice of a generation, he’s also got a slew of club-ready hits on the back burner and his latest single “PuTTin” is a true declaration of his double-edged sonic abilities. On the groovy Spax-produced single, Tekno delivers a raunchy sex-positive affair as he invites a lover to a private rendezvous with him. Singing “I never see ashawo ever, she talk say when you see me, I dey puTTin” he delivers raunchy and suggestive lines masked by the song’s catchy beat, which makes yet another party-ready track

Bad Boy Timz has had a great year so far. Following the release of his single “MJ” a few months ago, he amassed himself a loyal following who fell in love with the drum-heavy afropop number instantly making it his biggest hit yet. To capitalise on this, Bad Boy Timz has served up two remixes to the single, one with Teni and the other with DMW’s Mayorkun. Today, he’s released the video for the Mayorkun-assisted remix and it’s everything we would expect from the Michael Jackson-inspired single.

In the Adeyele Oluwole-directed video, Bad Boy Timz takes several leaves from the late entertainer’s book as he’s donned in a similar white and blue tux popularly associated with MJ, complete with the dance steps to match. As he delivers his lively verse in the dimly lit casino, he’s joined by Mayorkun who’s more than happy to flirt with Timz’ muse as they both deliver their stellar verses.

Abuja-based musical collective, Apex Village has just welcomed in a new member to the troop, 16-year-old singer Azanti. To properly induct him within the group, his debut project with Psycho YP ‘YP & Azanti Vol. 1’ has been announced alongside the promotional single for the project titled “Focused”. Over the infectious beat produced by Remy Baggins, Aznti delivers a stunning introduction into his world as he shows off his stellar lyrical chops.

The new single is romantically-inclined as both artists sing about their devotion to their respective muses who deserve all their attention. Singing “I ain’t tryna leave you alone/I’m just trying to make you my own” Azanti alluring vocals are on full display and we definitely can’t wait to see what he serves up next.

Hermez – “All the Time” featuring MOJO

Our Fresh Meat alum,Hermez has just released a new single “All the Time” featuring MOJO, a follow up to his recent single “Waves” which featured AYLØ and Le Mav. In his usual fashion, he’s declaring his affection for a love interest as he sings “Mama too too sweet, she never fold on me/Baby call on me and I give her D” as he tries to captures the ebbs and flow of his desire for his muse. He’s joined by rising rapper, MOJO who adds his slick flows to the new number making “All the Time” yet another single that he’s stolen our hearts and ears.