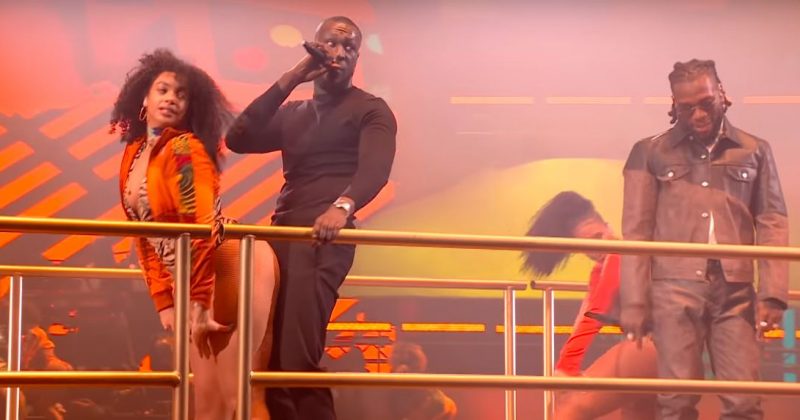 This week’s curation of the best videos across popular culture takes us through a celebration of Africa. We saw Burna Boy join Stormzy at BRITs 2020 stage while A$AP Ferg and Victoria Monét were in South Africa to bring their lustful fantasy on “Moments” to live. Oxlade and Reekado Banks’ “Craze” cut from the Ghanaian tributing ‘Afron Nation, Vol. 1’ tape also got a befitting video to mark Ghana’s ‘Year of Return’ campaign from last year.

Stormzy at the BRITs 2020 – “Heavy is the Head Medley” and “Anybody” feat. Burna Boy

Stormzy brought out Burna Boy to join him on stage during his performance at the BRIT Awards last week. Our birth issue cover star initially joined for the performance of Stomzy’s “Own It” before going on to perform “Anybody”, one of the hit songs from his Grammy-nominated ‘African Giant’ album. Stormzy performed a medley of “Own It”, “Wiley Flow” and “Rainfall”.

Dave’s “Black” performance at the BRITs 2020 was one of the highs of the award show. His emotionally charged pro-black performance resonated especially well with the timely messaged it delivered during the on-going black history month and the recently unveiled controversial immigration laws in the UK. He added verses written specifically for the night as he demanded justice for the victims of Grenfell and declared Boris Johnson “a real racist”. He was given a standing ovation by the end of his performance and he also went home with the Album of the Year award for his ‘Psychodrama’ tape.

The Mavin team aren’t letting their foot off the gas just yet. Crayon debuted his first track of 2020, “Kpano”, early in February and now has a music video to sustain the song through the rest of the year. Ozedikus produced the groovy beat to back Crayon’s boastful lyrics about his music’s efficiency on dancefloors and the Clarence Peters directed music video confirms his claims with the colourful dance-themed video that shows Crayon and some dancers turning up to the song.

Victoria Monét described her latest single, “Moments” as “a  psychedelic, musical mini world for a sensual dream that comes true after building tension. It’s a song encouraging a lover to step up to the beauty once imagined and make the satisfaction worth all of the salivations at last.” She has released the accompanying music video shot by A$AP Ferg (Valentin Petit), who captures the song’s lustful direction through artful, psychedelic VFX transitions meant to leave viewers feeling intoxicated. Victoria is shown enticing her love interest to come closer in a beautiful and tranquil landscape in South Africa.

Ghana’s year-long ‘Year of Return’ campaign from last year was soundtracked by Afronation’s ‘Afron Nation, Vol. 1’ tape. The 9-track compilation aimed to usher in the festival and capture Ghana’s musical range. Oxlade and Reekado Banks were among the highlights of the project with their romantic slow-burner, “Craze”, tailored to suit the mood of couples on dancefloors. The groovy earworm of the Ghanaian Highlife beat promised a memorable time on the dancefloor and the recently released music video directed by Naya sets the pair in a neon-lit room filled with beautiful women who dance while they perform their sensual lyrics.

The rapper formerly known as Ghetto P, Khalil has released his debut EP titled ‘Grown’. The 7-track project finds him expanding his sound to include dancehall and Afropop with features from Buju and Awe. His collaboration with the latter, “Grown” is the project’s standout track as it comes with a captivating music video directed by WG Films. The video follows Awe through the streets of Lagos as he performs the Yoruba-fueled hook while Khalil is shown walking through the desert as he raps about his return to making music.

South African rapper, Costa Titch is a talented dancer. His dance videos often go viral on the internet and have helped him secure a spot as one of the more exciting acts in SA hip-hop. All his hard work seems to have finally paid off as he features two of the biggest rap acts in South Africa, Riky Rick and AKA on his latest release, “NKalakatha Remix”. Though the song has been out since last year, the music video is building more buzz for the song as he performs more entertaining dance moves while celebrating SA’s hip-hop street culture.

ICYMI: Watch the music video for “Location” by Dave and Burna Boy

Next Article 2Baba set to release ‘Warrior’, his first album in six years