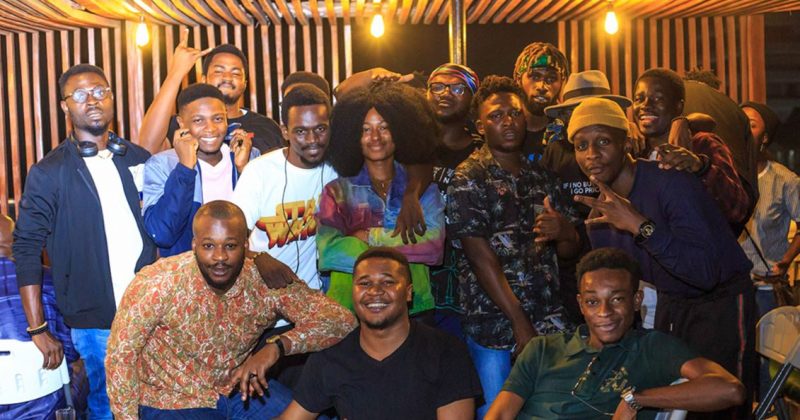 A very popular saying goes, “If you want to go quickly, go alone; if you want to go far, go together”, and WeTalkSound, a community of musicians, creative artists and music enthusiasts, demonstrate the strength of going together. Last year, when they dropped their sophomore compilation project, we described WTS as “a phenomenon laying wait, infecting music culture to the farthest reaches of the internet”. This aptly describes the truly boundless collective who have been growing at a steady and impressive pace, meeting the stakes for each endeavour, while also raising the bar to constantly inducing evolution of the music scene.

From the early 90s’ collective of alternative hip-hop groups, Native Tongues, to the sprawling, radical and irreverent Odd Future, We Talk Sound has traceable precedence, however, their broad and seemingly infinite scope is what sets them apart as a distinctive community. Interestingly enough, they didn’t exclusively set out to make the group what it is now; as the full name implies, the online group was formed initially as a forum to trade opinions about music. Shortly after, they realised that a significant amount of the members were up-and-coming artists who were actively aiming to hone their skills, and this led them to organically morph into a space for artist’s support.

Even with this evolution, WTS has retained an informal edge, which manages to give both new and old members a sense of ease they typically won’t find so easily in the current climate of the music industry. Every day on WTS’ 1,000-strong Telegram channel brings with it new topics and debates, which are always positive – everyone can freely drop their takes. Even when there’s disagreement and things get heated, it barely results in malice, which creates a welcoming environment for new members to get acquainted, share music whether it’s theirs or a friend’s and leaving room to galvanise support within the community.

“You don’t have conform to anything; you can just come on the group and say, ‘You guys, please give me feedback’”, co-founder,  Dolapo Amusat tells me during a long and insightful conversation at his Lagos apartment. This exact example he describes is something I’ve witnessed on the group myself, and while the number of reactions varies, artists sharing new or old music will be met with comments, whether positive or negative. Depending on how enamoured members are with the music, the comments can turn into far-reaching levels of support and interaction.

“Support on WTS ranges from receiving feedback, to people actually streaming your music and sharing it on social media, to connecting with a producer who could give you a beat or help you record your music etc”, Dolapo explains, shedding light on the community’s wholesome nature. While the level of support you gain as an artist sort of depends on how active you are in the group – for instance, an artist who only pops by to share new music will most likely not garner the same amount of reactions and backing as one who is more visible and shares their thoughts during chats. From what I’ve gauged, it’s not really about being on the Telegram channel 24/7, as much as it is a combination of being familiar name or moniker and making sure your music passes the litmus.

Regardless of a member’s relationship with the community’s online channel, members can rest assured that WTS has positive value for them. With the amount of substantial discussions tucked in between the fun, the community is an educative avenue for creatives and non-creatives to learn about any and everything related to the creative and business aspects of making and releasing music. There are as many debates about the fine prints of making a song, as there are in-depth conversations about how to distribute and market music. Even if you’re not contributing, you’re gaining by paying a little attention to the discussions.

All of this knowledge and camaraderie culminates into WTS’ approach in pushing whatever project they’re involved in. During their early days, the idea was to digitally strong-arm as many people as possible, with members tweeting the link to a song and aggressively tagging any and every one they could online. “We used to be very noisy on social media”, Dolapo admits, but you’d be incorrect to think they’ve dialled down the noise. These days, WTS is operating on a laudable level when it comes to promotions, retooling that noise into well-intentioned and well-executed roll-outs. It’s no longer just about strength in numbers, but also placing an emphasis on quality so that each effort makes a sizeable mark.

“Bio’s “Indigo” was the first thing we did that was creative on the level we now create stuff”, Dolapo tells me. The release of the lush and seductive R&B track was preceded by extensive pre-promotions, mostly centred on fan interaction, as a way of reeling in bystanders and doubters into the WTS fold. This methodical approach resulted in the most streamed song to come out of WTS’ stables at the time, leading the way for the community’s commitment to creative and promotional campaigns, now being led by its young but accomplished creative arm, WTxtra.

Dolapo describes WTxtra as “a proper business” that services a wide range of clients, from artists—WTS affiliates and otherwise—to corporate bodies. In about a year of its existence, notable accomplishments on the agency’s portfolio includes a campaign for ride-sharing company, Bolt, and building interactive fan websites for artists like Dami Oniru and Teni. In a bid to further establish themselves, WTxtra will be putting out their debut product in a few months, one that hones in on the team’s inventive use of technology in connecting with potential fans and listeners.

Regardless of all of this, the most important thing to them still remains the music. Just last month, they put out ‘LOFN 3: A Collection of Love Stories’, the third consecutive instalment of their Valentine’s Day compilation they debuted in 2018. Arguably the best edition yet, ‘LOFN 3’ packages the musical diversity of WTS into a captivating, front-to-back experience.

True to its title, it’s a collection of stories that compels listeners to consider love as something best experienced, even with its ups and downs. From obvious standouts like Shakez’s “Long Distance” and Meji’s “Overkill”, to the deeper and immersive cuts like Dwin the Stoic’s “Juju” and Caralee’s “25/8”, the compilation uses variety as a binding tool, and fronts the ideal of WTS as an aggregate of its affiliate artists.

As with previous editions, songs on the project were sourced through artist submissions, but according to Dolapo, ‘LOFN 3’ almost didn’t come together the way it did. “A few weeks—even days before—we were far from ready with the project”, he tells me, explaining that finding the right songs didn’t happen till the last minute. Even the stunning, summery baecation vibe of the cover art went down to the wire, with the designer, Vik, initially spending about ten hours straight on a rejected idea, only to come up with the eventual cover on a final try in about three hours.

This process for ‘LOFN 3’ points to the mix of carefulness and spontaneity that buoys the creative packaging of WTS, and it’s not stopping anytime soon. Dolapo understands that with more “industry” and general eyes on the community, there’s a pressure on WTS to continue to level up and deliver game-changing work. It’s a situation he’s fine with but not at the expense of the boundless energy at the community’s core. “We’re going to experiment more, we’re going to try out new things so don’t put us in that ‘saving the industry’ box”, he asserts. “We want to better than everybody else, but we’ll probably make mistakes, and that’s fine ‘cos we’ll learn from it.”

For all of the grand visions, Dolapo maintains that being a safe space where artists learn, interact and even earn off their work remains the priority for WTS. “It’s important to me that WTS remains a community that encourages and supports different people. In fact, the goal for ‘LOFN’ and future projects is that artists can make money off their work”, he explains. In an increasingly fragmented and oversaturated music landscape, it is tough for independent artists to make substantial money off streaming and sales, but Dolapo is sure that WTS is getting there slowly but surely. At the very least, the projects are directly affecting the organic growth of its affiliates’ fan base, which is definitely something to be proud of.

By banding together and refusing to be separated, the community is creating impact for itself and artists within it. The sprawling group may not be going as fast as, say, their Alté counterparts, but the momentum WTS is consistently building up brightens their future prospects and assures that they’re a phenomenon that will go whatever distance and heights they set for themselves.

Next Article For the Girls Special: How women’s place in music has changed over the the decade