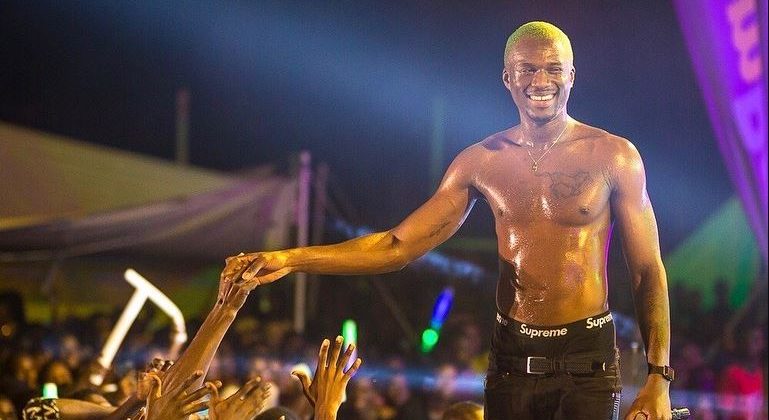 Joey B fancies himself something of a rap savant. Across a sprawling discography made up of several singles, overflowing guest features and his debut project, ‘DARRYL’, the Ghanaian rapper has built up a grand artistic persona, hinged by his range and adaptability. The rapper is as adept at making chest-knocking rap cuts, as he is comfortable spinning light summery hops, and no matter the sound or collaborators, Joey B always finds a way to fit in.

On his latest release, ‘Lava Feels’, Joey continues his act of shuffling through whatever sound he feels like. In nine tracks, he completely forgoes any attempt at cohesion, using his curiosity as the project’s sole anchor while the music continuously shifts gears. When he announced the project, Joey described ‘Lava Feels’ as “just a collection of songs”, effectively adjusting the expectations for what would’ve been deemed as an official sophomore project.

not an EP not an album not a mixtape. just a collections of songs. #LavaFeels out May 5th 2020. 💚

In a time where one of the biggest artists in the world has successfully floated albums as mixtapes, a playlist project, an official compilation of loose singles, and very recently, a tape of leaks and demos, ‘Lava Feels’ is right at home in a liberal era where artists can describe their music as whatever they want and pretty much get away with it. To its credit, the collection maximises its low stakes billing. For the most part, it sounds like the work of an artist who knows he’s pulling a fast one, but it’s difficult to call him out on it since the songs here are high-functioning and well-executed.

‘Lava Feels’ is Joey’s assertion of his right to creative freedom. He’s never been one to be pigeonholed, but in presenting himself as an artist with several interests and his own unique agenda, the collection is radical and refreshing. “Read in between the lines, I’m a different type of guy”, he sings on the titular  track, contorting his melodies into infectious passages that melt into the psychedelic strings and reverse piano samples. “Lava Feels” charts a new sonic terrain for Joey, but it’s a great showcase of his powers as a songwriter, an ability that serves as a potent through-line even when the tape threatens to unhinge.

Joey has always been a big picture guy when it comes to making music, taking cognizance of the ideal that every facet of a song, from its verses to the hook, plays an important role in keeping the listener’s attention. On the cutthroat banger, “Silicon Valley”, Joey exudes a casual irritation with a past lover on his verses, delegating the spitefulness to Bossom P-Yung, who switches between rattled couplets and helium chants on the song’s instantly memorable hook.

In all its carefreeness, the collection does a great job of lending Joey B a personable layer. On “Far Away”, Joey reminisces about the days of lean purses and constant prayers to make it big, radiating a joy in his present situation that’s unspoken but palpable nonetheless. He’s joined by M3nsa, who emphatically states his priorities as a man and a father on the song’s dazzling second verse. In addition to its affecting content, the soulful west coast bounce of “Far Away” is a sonic delight, evoking the feeling of riding top down on a road bracketed by tall palm trees, and with the sun beaming down.

While Joey’s music selection is a vehicle for emphasising his range, ‘Lava Feels’ also ropes in its multiple guests with the soundscape that best fits their voices. The ode to hustlers, “Hard Knocks” is carried along by a ‘90s rap and r&b-hybrid instrumental, acting as the perfect backdrop for Ko-Jo Cue, the Ghanaian rapper who does a lot of his best work with music that emboldens self-reflection. Odunsi (the Engine) and Santi bring their vibrant cool to the synthy ambience of “Over You”, while Joey plays the mellow foil to Stonebwoy’s animated verve on the dancehall meets Spanish guitar revelry on “Affection”.

If ‘Lava Feels’ was billed as a full-length project, it would probably represent an apotheosis of sorts—an elevation to a higher creative level, if you will. Semantics aside, the collection is a fully realised body of work, which definitely exceeds expectations. Even after recalibrating, the project’s blistering quality doesn’t wane, making the perfect case for Joey B’s delightfully arrogant and nonchalant way of showing that he’s been this level for a while.

Next Article Op Ed: Tekno is actually the voice of our generation