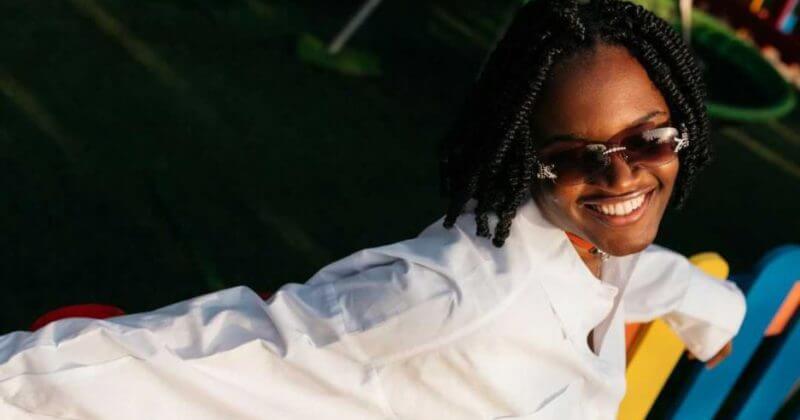 Three years ago, thousands of previously uninitiated listeners were introduced to Amaarae’s ability to elevate songs into instantly captivating experiences. On AYLØ’s “Whoa”, the Ghanaian singer swiped the rug, both thematically and performance-wise, from underneath her host (to his credit, though, he’d set the stage perfectly for the scene-stealing showcase). Shortly after, Amaarae she released her breakout EP, ‘Passionfruit Summers’, a formative, immersive project where she heavily indulged in the weightless vibe of neo-R&B, bedroom pop and the occasional dash of cloud rap.

Between her flair for writing striking lyrics – often times daringly direct and cheeky – and a unique voice that can channel the ambience of a séance and personify summer’s warmth, it was evident Amaarae was developing into a singular, inimitable voice. From Santi to Odunsi, Kojey Radical to Show Dem Camp, a long line of artists tapped the singer for her sauce, and while her features always play a defining role in those collaborations, you could tell she was only lending out her aesthetic while figuring out the next stage of her evolution.

‘The Angel You Don’t Know’, Amaarae’s new debut album, is the manifestation of an artist with a far superior grip of her powers, as singer, songwriter and creative auteur. In 35-minutes of phenomenal music, Amaarae effectively reupholsters any prior perceptions of her abilities, remaining as distinct as ever but with new dimensions for good measure. It’s the culmination of a campaign that ostensibly began with last September’s “LIKE IT”, where she purposefully moved her music into groovy, viscerally affecting territory without sacrificing her unique vibe. ‘TAYDK’ builds on those sensibilities to deliver one of the more enchanting pop records this year, from anywhere in the world.

With maximalist production that is mirrored by the lurid and bizarrely alluring cover art, and Amaarae’s unflinching confidence as a performer, ‘TAYDK’ is situated on the cutting edge of afropop, exemplifying the genre’s adaptability to a wide range of sonic influences. “I strived to colour outside the afro-pop parameters and re-define for myself what it means to create African music”, she wrote in the album’s press release. Although each song plays a major role in ensuring this vision is wonderfully represented, the mid-album sequence of “TRUST FUND BABY”, “HELLZ ANGEL” and “CÉLINE” is symbolic of what makes ‘TAYDK’ unimpeachably great.

“Drown in sunrise, angels sounding off against the tides/I’ll take my time, soak in all the feels and all the vibes”, Amaarae chants alongside twinkling keys on the zen-inducing opening sequence of “TRUST FUND BABY”, using poetic imagery to set the scene for a song that exalts opulent sex. In certain terms, Amaarae declares that sex with her is a privilege, largely due to being financially secure. Singing about fucking on silk sheets, Amaarae’s effortlessly sensual vocals and gently snappy melody runs lend a casual authority to her boastful lyrics (“Trust I’m not trappin’ out the bando/had it all handed to me”).

If “TRUST FUND BABY” motions at confidence with sex and money as framing devices, Amaarae uses “HELLZ ANGEL” as an exercise in showcasing just how secure she is in herself, as a person and an artist. The sexy bounce of the preceding song segues into something much giddier, with a beat that intersects between bubblegum trap and psychedelic pop. Amaarae slips into a supple rap flow, reeling out bars extolling her impenetrable and vivacious candour. Stuffed to the ear with quotables—“I don’t make songs, bitch, I make memories/I don’t like thongs, ‘cause they ride up my jeans” is one that will instantly lodge in your head—“HELL ANGEL” is an extremely fun song, so much so that even when she briefly contemplates on the chances of buying her mum a Bentley, it comes across as a target she’s set on accomplishing soon.

“No, babe, I ain’t got a milli yet/but I’m blowing up on the internet”, she goes on to rap over the humming keys, knotty guitar riffs and sliding bass synths of “CÉLINE”. On the Kyu Steed-assisted cut, Amaarae woos a teasing love interest, leading with an unabashed honesty that finds her admitting horniness in charming manner: “I don’t really do feelings yet/but you’re getting kinda thick, yeah”, she sings. In addition to being incredibly catchy, “CÉLINE” continues Amaarae’s commitment to crafting sexually fluid songs, a trait that makes her even more unique within the relatively new vanguard of afropop.

In its own compelling way, ‘TAYDK’ brings to life a vision of the progressive African youthful creative, where there’s zero tension between honesty and cockiness or sexuality and romance. “TRUST FUND BABY”, “HELLZ ANGEL” and “CÉLINE” are at the centre of this experience, and in the process, Amaarae has undeniably strung together one of the best 3-song sequences in recent afropop memory.

ICYMI: A 1-LISTEN REVIEW OF AMAARAE’S ‘THE ANGEL YOU DON’T KNOW’

0000
Previous Article Bruk It Down: How BurssBrain and Ozedikus tag-teamed on Rema’s “Woman”

Next Article Songs of the Day: New music from Yemi Alade, Pa Salieu, Ictooicy and more