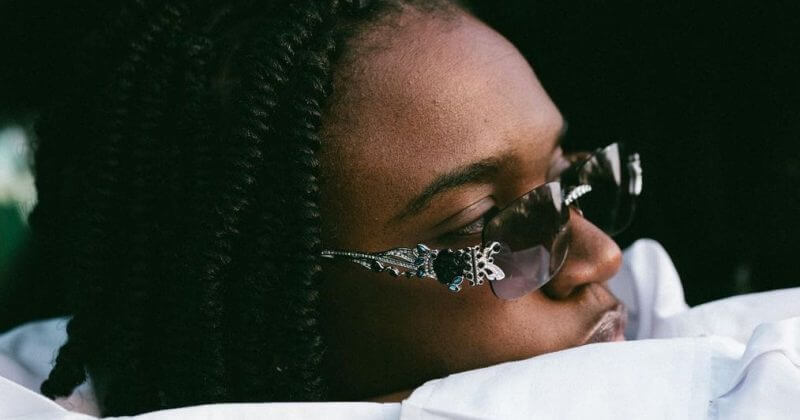 Back in July, Amaarae came out with a delayed first single of the year, “Leave Me Alone”, a characteristically Gen-Z self-love song that emphasises protecting your space in a blunt, unapologetic way. Since “Leave Me Alone”, Amaarae has been prepping fans for her debut album, ushering out a ensorcelling music video to the lead single, followed up by a second promotional single, “Fancy”, which was also accompanied by a striking music video. Over the months, Amaarae’s build up has gotten more than tantalising, leaving fans and critics eager for today, the final release if ‘The Angel You Don’t Know’.

Sharing links to the album via her finsta over the past month, Amaarae has continued to whet fans’ appetites, and ultimately piqued our interests when the tracklist was released a few days ago. Bouncing with features from familiar names like Santi, Odunsi (The Engine) and Kojey Radical, Amaarae also promised to introduce us to fresh meat on the album. With KZ and Rvdical The Kid handling most of the production, from the promotional singles and “NASA” which appeared on Rvdical’s ‘Little Planet’ EP a couple of months ago, the tracklist also gave us a good indication that the beats on the project would be super hot.

Our expectations were justifiably high. Amaarae is one of the most exciting young African creatives, with a unique voice and an unmatched savvy when it comes to making music. Her playful, unaffected, accessible character – on full display right from the album’s witty song titles – also makes Amaarae that much more loveable and so easy to stan. So, justifiably, my expectations for ‘The Angel You Don’t Know‘ were high. Read my one-listen review to find out just how well Amaarae lived up to them, as you listen to ‘The Angel You Don’t Know‘ here.

Yes to this garage-band fuzz! I love this beat, omg! Haze and KZ finished work, excited to see KZ has more on this project – promise of more heat.

Amarae is the best rapper I Africa. I love her in her trap bag. Let me not say trap before I get dragged on the bird app again. Okay, I appreciate these light adlibs dropped in there, who is responsible for this? KZ again? I feel so darn fancy. Bring back Amaarae, o! I don’t mind this 6IX outro but I want to hear my queen for another verse. “Fancy” actually makes for a really great opening song!

The mood has dropped significantly with these chimes on “Fantasy”, but in a bad way. I am getting ‘Passionfruit Summers‘ throwback vibes from this production and her whisper-like vocals. This reminds me of “Sunday” with the male feature as well.

I love a good duet, but I can’t tell how I feel about this one. I’d prefer if their vocals were more refined, it just feels like a lot of… I think CKay is the highlight of the song. Feeling the party shouts mixed into the background. The chorus catches on the second time around, but my thoughts on the duet are confirmed; duets should be reserved for proper singing (think “Lovely” Billie Eilish ft. Khalid), not the raspy kind of vocalisation going on here.

Oya, give them. Another production that feels like signature Amaarae. I haven’t even been keeping up with the lyrics so far, but I absolutely love the bars on this record, likely because this has been my mood this entire year. Okay, Amaarae is the best rapper in Africa, I love how she does it! I like the contrast between the loud pop chorus and the mellow, contemplative pre-hook – it feels like she is actually shouting at people to leave her alone after building up to the vex.

I am so excited for this track, because, Santi. I was not expecting it to be a mellow number, feels very R&B, I wonder how Santi will get on it. Okay now I get it, from these drums on the chorus. Okay, Santi is giving VOCALZZZ. I really dig this guitar, sounds like Starro and Joshua Moszi have some bass and acoustic(?) going on between them – lovely. The guitars are the best part of the song, in my opinion. I love the chorus by the way, “you gon’ make me leave the one I’m with, Jumping Ship” – I like everything toxic and this sounds just that.

Listen to those claps, she’s getting down with the afropop, I love this for Amaarae! The voice on the second is soo excellent, I am so impressed! I think this is Moliy but she’s so similar to Amaarae, if so. I love how the beat has completely changed up, it stripped during the first half of the second verse and came back with a whole new flair. I like this a lot, it feels like a low maintenance dance song – feeling a way for real. These girls are like Totally Spies, a true force!

From this title I am expecting a banger. Okay, so this is not the up-tempo record I was expecting but this feels rich, I’m getting wine glass bubble bath, white cotton towels. Okay this is so hot! Haaaa, I love these lyrics!! Trust fund nigga eat this pussy please, spoil this pussy please!

Ooh, I love this melody, it plays, to me like a mature nursery rhyme. This is my favourite song so far and I’m only 18 seconds in. I will get my mama a Bentley AMEN! I said Amaarae is the best rapper in Africa!! We will make it AMEN! I’m playing this song on loop to manifest. I love the oxymoron in the name and the juxtaposition of this prayer for wealth, but like from hell! This song so playful and is quintessential Amaarae to me – another reason why I love the name, totally her. “I don’t make songs bitch I make memories,” ooof. She is truly in her bag! Wow, what a powerful ending as well.

Another formidable beat, Rvdical The Kid sabi work well. I love this chorus. This song is incredible, the harmonies, Amarae’s melody – all perfect. “I don’t really do feelings yet, but you getting kind of thick” – hell yah! I like that brief interjection of Kyu Steed verse, but I wish Amaarae took this one solo. I see this being a crowd favourite. I love this studio cut at the end! That was cute.

“DAZED AND ABUZED IN BEVERLY HILLS”

She really took it to Beverly Hills with this one. I love the names on this project. Ahh, this is really a pop tune, but it’s an interlude? Oh I really wanted to hear more of that. Let’s pressure whoever for the full ps please!

Oshey, Mama Africa. This feels a lot more like afropop than all the other records. Maybe it’s Moliy’s influence. The “winiwana whine your waste” chorus is a big part of that but also thanks to DOZ who’s on the beat. It’s short, but the perfect length I think. To be honest, the album could have done without. Considering the title and the TL topic today, I wish this song went harder, but ah well.

Is this an alarm sound or am I tripping because of the title? Actually sounds a little like a lifeline. Yoruba Amaara? Emi ati iwo? Tiwa Savage (“Sugarcane”) reference? Ok, now she’s doing a multiple part harmony. Is Amaarae is really in love? Unfortunately, I relate. “Hold me down, you won’t regret it,” guys beg my last ting I want someone to hold me down at 3AM.

Amen to “dollars all around.” This is another number manifesting wealth into her life. Amaarae is all about the money, she loves love too but none of that detrimental shit. I want to get into Moliy’s music a bit more, she and Amaarae have great synergy, I can hardly tell who is who – even on “FEEL A WAY” – the major distinction I can hear is Amaarae’s American proclivities. Another amazing close to the song, I like how abrupt and not dilly dally, not lurking her songs are at their end.

I love this breezy production, feels like ’17 Amaarae, which is fitting, to me, because she’s also got Odunsi on this record and I discovered them both #thatyear. I love this reverberated tag team between on the bridge. The Engine brings forth the vocals, his voice has really improved over this past year, love that for him. Considering the sombre topic of his verse, that acts as the “SAD FACE” to Amaarae’s “PARTY”, a strong voice is definitely needed to convey the vulnerability he’s going for with these lyrics.

Okay, excuse me what is this? Ohhh this is the “CRAZY WURLD” and it’s a made one indeed. This is phenomenal. What an outro!!!!! Goodness, that was perfect. Mood lifted, ‘The Angel You Don’t Know‘ on a HIGH!

Amaarae is rapper of the year. I just love how she does it, she is so so unique! Every different sound she dips into on this album, she reconfigures so they all still sound distinctly her. I am not sure the features were always worth it, there are quite a few and no contribution really wowed, apart from maybe Moliy and Odunsi’s voice and subject. Overall, a great album though; “CELINE” and “HELLZ ANGEL” are my faves.

Next Article Songs of the day: New music from Ayüü, Olamide and Omah Lay, dndSection and more