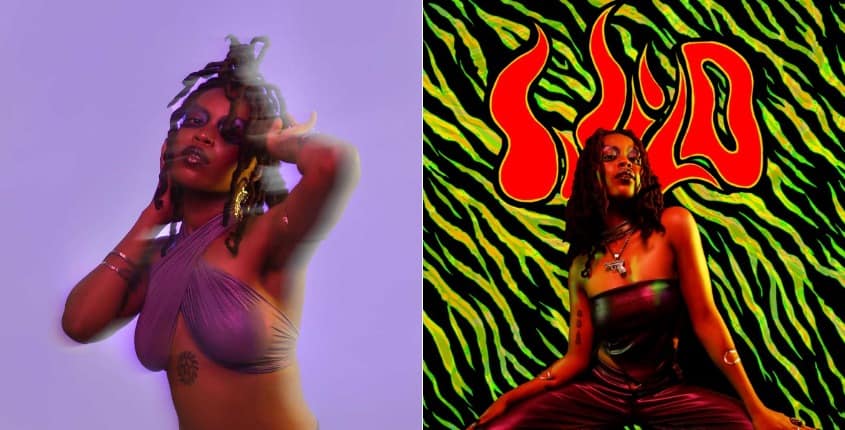 Following the release of her 2019 debut album ‘Enjoy Your Life’, Nigerian singer-songwriter Lady Donli found herself catapulted into a new level of success. Critically acclaimed and largely regarded by many as her magnum opus, ‘EYL’ was a glittering collection of sunny, retro-inspired African sounds accentuated by Donli’s rich array of melodies and stunning musicianship from her collaborators. It earmarked the singer as one with a tightly honed craft and a deft conceptual eye, placing her amongst the artists championing excellence amongst the new Afropop vanguard.

However, when the world fell into lockdowns a year later, Donli found herself standing at a crossroad. Like many of us, 2020 was a whirlwind and the singer found herself holed up in Toronto for the greater part of the year. Somewhere between all the chaos, she found time to record her sophomore album and fashioned a new alter ego to suit the imminent release: Space Whore. While fans have eagerly waited to beckon in this post-EYL era from the rising star, it seems that Donli isn’t quite ready to open the floodgates quite yet.

The result is what we are witnessing today: the release of her third EP ‘W I L D’, his first in this format since 2017’s ‘Letters to Her’. The title of the new EP is aptly abbreviated to signify the question that occasionally popped up on our timelines this year: ‘Where is Lady Donli?’. She recently returned with the instantly compelling “Searching”, proving her time away has been focused on giving us the best music possible.

In usual 1-listen fashion, all reactions are in real-time while the music plays. No pauses, rewinds, fast forwards or skips.

This number opens up with a slow, smooth piano-led introduction bolstered by a groovy, memorable beat. She says “Donli where have you been?”, a question I’ve had to ask myself since her social media hiatus this year. So far I’m loving the sound of this comeback. This reference to fighting demons in quarantine is really hitting close to home because 2020 was one hell of a ride for everyone. Donli is talking about being at this crossroad as I mentioned earlier. It’s clear she doesn’t know where to go next but she is willing to take her fans along for the ride. I really like this intro. It’s short and  leaves me super enthusiastic to hear the rest.

“Searching” is probably one of my favourite tracks on this EP. I’ve been listening to it on a loop since its release. It’s Afropop but with a bit more pizazz and that’s mostly thanks to GMK’s stellar production. At this point on the project, the pace seems to have picked up now but it’s still a bit slow. I love the faux adlibs, they carry the songs and its catchy melodies. The lyrics don’t disappoint either. As the title suggests, Donli is searching of searching: whether it’s herself or love or answers to life’s most difficult puzzles, it’s clear that she can’t quite grasp the results she would like. However, her words are very sincere. She lets the beat take centre stage at the end as her voice slowly fades out. This isn’t where you come to find answers, we’re here for a good time.

This is a very sunny intro. The mood is certainly more exciting, and makes me want to dance. Sugabana is always fire so I’m really loving this patois-inflected intro. OK! Donli preaching consent with “Put it on you, only if you want me to”, as she should! I’m getting nostalgic from these lyrics as well as she begins chanting, “tell mummy for you” halfway through her verse. It’s not my beat but this is definitely Donli-esque (don’t ask haha). The rhythm of this beat is really catchy and, I imagine it being stuck in my head for days after. Shae Universe and Sugabana also complement Lady Donli beautifully on this track. I will definitely be revisiting this later.

Whenever I see abbreviations, my brain almost instinctively tries to work it out but alas! I wasn’t successful this time around. I could never have guessed Mysterious Kitty Kat but I’m really loving hearing Donli in a new light. This is a sex-positive number and Donli doesn’t hold back from laying out her sensual desires. Of course, classic Donli, that P Square reference isn’t out of place at all. I’m also pleasantly distracted by Donli speaking pidgin. Totally here for it. This sounds very fun! Perfect length as well, short and sweet.

I always love a good freestyle on a body of work. Okay, I’m living for this tempo, a perfect balance of upbeat at moments and segueing into a slow and steady pace as the song builds up. “Smoking in the hope of your love,” is exactly how I would describe myself when I catch feelings, would certainly not recommend it. While there are definitely great moments, this isn’t doing it for me but I’ll have to re-listen at a later time. The chorus is super catchy though.

This is the final song on the project and I’m a bit bummed out that it’s over already. Are deluxe versions of EPs a thing because we should totally petition Donli to release one immediately! I will say to this point, each song on the project sounds very different which I absolutely love. Donli and Ragz Originale’s vocals blend so well on this as they delve into sensual matters. Back with the nostalgic lyrics with a smart reference to Asa’s in “Fire on The Mountain”. At this point, I’m ready to crown Donli the reference queen and would love to have a peek into her creative process. More patois from Donli as the song builds and oh I love a good conversational outro. “Abeg you guys should free me jor” is my mood for the rest of the year. Oh wait there’s more? This “Lova Gyal” outro is everythinggg. Wow, now, I’m left wanting more.

Over 6 new tracks, Lady Donli ruminates on the answer to this question, prodding at the source of her scars, questioning herself and her intentions all the while finding time to fall in love and have fun with her friends. Sound familiar? That’s because it’s literally the Gez Z-Millennial story arch these days. Lady Donli has become the poster girl for saying things we don’t want to say outright. With soul-stirring vocals and a mastery of different genres including R&B, Pop and Reggae, the chameleonic singer takes listeners on an immersive listening experience. It’s clear that she’s tipped the scale on her creative output once again. Come here for the answers and stay for the comfort in the lack thereof.

ICYMI: MEET SHASIMONE, THE BRITISH-GHANAIAN RAPPER ON DAVE’S “BOTH SIDES OF A SMILE”