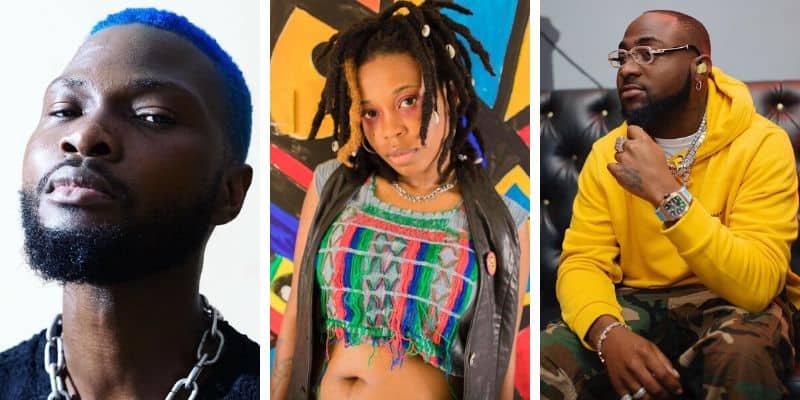 Earlier in the week, we brought you the mythical banger from Odunsi (the Engine) and Maison2500, a new song from one-half of R2bess, Mugeez, a Davido-assisted club-ready cut, Skales’ link up with Akon, and more. To start off the weekend, we have a new collaboration from Davido, Shizzi, and Wale. There’s also new music from Teni, Wurld, Lady Donli, Dami Oniru, Teffy, GJtheCaesar, Ayüü, and more. Dig in, and you’re welcome.

Shizzi has just released his debut single of the year, “Won Le Ba”, a self-produced bop which he enlists Davido and Wale for. The upbeat afropop number is a fusion of groovy percussions and pounding drums creating the perfect backdrop for this self-assured romantic cut. “Won Le Ba” roughly translates as you can’t keep up and Davido and Wale hone in this message with their boastful verses. ‘Y’all make noise but you don’t make ‘nough’ Wale raps on the song’s second verse, as both artists make fun of their competition and boast about the attention they receive from beautiful women.

Orezi is setting the pace for his upcoming album due in July with his latest single, “Your Body” featuring Teni. The sensual song celebrates women in all their greatness and the accompanying music video which is set at an outdoor party, shows how the new track is primed for the summertime–if we ever get one (yes I’m talking to you Miss ‘rona). Teni joins Orezzi to address a potential lover, ‘Hello my baby, how are you doing/I don dey wait you’ both artists sing on the hook against the groovy beat clearly geared towards the dancefloor.

WurlD has just released his new EP ‘AFROSOUL’ a 7-track cut filled with soulful fusions where he unabashedly bares his soul to anyone who’s listening. On the EP’s opener “National Anthem (Growing Wings)”, WurlD delivers a deeply introspective track, where he sends a message of encouragement to fellow Nigerians, telling them we’ll get through the storms. ‘Dem go try but they can’t divide us/Dem throw stones but it never go touch us’ he sings, determined to inspire others who listen to the song to strengthen their resolve while also delivering a catchy number that we can still groove to.

Last month Maison2500 released a new project ‘Turnpike’ which housed the catchy psychedelic number, “Dirty Fanta” featuring Odunsi The Engine. He’s just released the video for the standout track and it’s a family affair, filled with cameos from everyone in the rapper’s inner circle from DRB’s Teezee to DETO Black as Maison’s muse. He’s joined by Odunsi for a psychedelic trip, where they both spits bars about the fun party-filled lifestyle they live illustrated in the video.

Since releasing her stunning debut, ‘Enjoy Your Life’ last year, Lady Donli has been proactively delivering some fire collaborations from her “Cash Remix” with Davido to her appearance on DRB’s “Ma Pariwo”. She’s been teasing a new single with Darkovibes for a while, and now she’s finally released it. Produced by Kuvie, the groovy afropop number sees our favourite Cash Mummy returning to familiar retro-inspired African sounds, and she pleads with potential love interests to leave her alone, because she’s not in the headspace for love.

Earlier in the week, we spoke to Dami Oniru about her life while she’s isolation with her family, and she let us in on her new release “Nowhere to Run”. The song was actually an original submission for Beyoncé’s Lion King: The Gift, and has now released it to send her fans an encouraging message whilst we’re all stuck indoors. ‘Nowhere to run to, nowhere to hide/I’ve got no time for tears, only space for greatness here’ she sings, reflecting what many of us may be facing at the moment with having to stay indoors as the world battles with the ongoing ‘rona pandemic.

The song is about forgetting who you are at some point, and eventually working through things and rediscovering your power and your strength in your weakness and just remembering that whatever the situation you are going to get through it. It’s inspired by Lion King, and I think the message in the song is really powerful so I thought no better time than now to spread the positivity.

Teffy is back with a new catchy single “Bumper”, his first release since ‘Melody King 2’ earlier this year. “Gidi Bumper” is a catchy afropop number with catchy drums and smooth melodies produced by MakBlaze. Teffy starts off the song saying ‘many people gonna use this for healing’ as he spends the rest of the song trying to soothe listeners, recognising the unprecedented times we’re all living in. The song clearly aims to give listeners something to keep them happy and take their minds of these times.

Abuja-based artist, GJtheCaesar has just released the first single of the year “Gyrate” featuring Ayüü, a truly enjoyable number to wind down with this weekend. Both artists trade verses about the elated feeling they get from dealing with their love interests, and how the reciprocated love makes them want to sing and dance. ‘When I get that feeling/Girl I know you feel it’ sings GJtheCaesar over the song’s hook before being joined by Ayüü on the second verse who raps about getting that sensual feeling to make love.