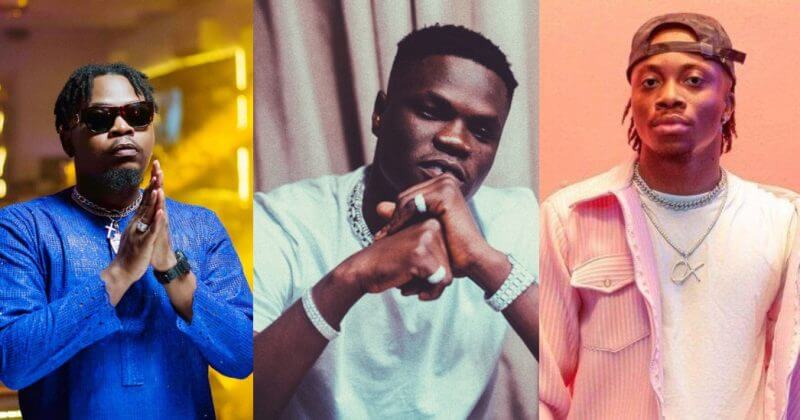 The last few months have been difficult. But with four weeks left until the end of the year, we’re trying to find more ways to be thankful and present in the current moment. While we’re still dedicated to amplifying and reporting the issues that have plagued us this year, we’ve now resumed our column, Songs of the Day as a nod to the artists putting out great music that serve as a momentary escape from all the grimness of the current news cycle.

December is officially here and although we’re looking forward to the festivities, we can’t gloss over the impact COVID-19 will have on the music industry this year. Concerts and festivals have been cancelled and replaced with socially distanced live shows and everyone from Wizkid to Burna Boy has lined up something interactive but safe for their fans. So it’s fitting that when Olamide chose to release the latest video for his standout single “Loading” featuring Bad Boy Timz, off his recently released album ‘Carpe Diem’, he tapped into some very quirky features to bring the song’s exhilarating message to life.

The Clarence Peters-directed video is an immersive VR experience that takes viewers on an inebriated journey into a world entirely of Olamide’s making. Here, viewers are in full control of their viewing experience, with the ability to immerse themselves deeper into this colourful and vibrant world with just the click of a cursor button. In this reality, everything is vibrant or nostalgic, it’s the perfect video for these times.

The music industry got a lot of representation from Oxlade and his manager, Ojahbee during the EndSARS protests. They showed great courage in the frontline of the fight against police brutality and Ojahbee is most likely to still carrying scars from when he was illegally detained and harassed by the police. However, the duo shows us that they’re lovers not fighters on their new collaboration, “Dutty Love”, where Oxlade sings over the catchy r&b infused-afropop instrumental produced by Ojahbee. The song is a mixed bag of playful innuendos for a late-night rendezvous as we hear Oxlade sing romantic lyrics to convince his muse he’d do anything to prove his love.

Reekado Banks has blessed fans with a new 7-track EP, Off the Record which boasts of impressive features from Tiwa Savage, Mr Eazi, Attifaya, EO, Kida Kudz, and Tanzanian’s top pop star, Harmonize. The Kida Kudz and EO track, “Need More” announced the tape’s aim to highlight Reekado Banks’ diverse sonic pallet as well as his global range of influence as he sang over a grime beat. However, after hearing the rest of the EP, it’s clear that he can deliver a far more convincing performance when tributing his home country.

“Mama” is the tape’s last track and it’s dedicated to celebrating the local sound of the continent. Tee Y Mix produced the groovy instrumentals, inspired by the Soukous sound of Congo while Reekado Banks and Harmonize take turns convincing their muse and listeners of the beauty of the continent.

Di’ja has continued to serve us with tunes that are inspired by her northern Nigerian heritage. Her latest single, “Inyamuri” is a love song which she sings in her heavily Hausa-accented voice. Di’ja has always had a great voice and watching her wield it as a traditionally-inclined artist has been surprisingly refreshing.

On “Inyamuri” her lyrics, “I’m in love with Inyamuri” are desperately romantic as she celebrates her love, singing “Spoil me with money/ he buy me designer”. “Inyamuri” is expected to feature on the Mavin singer’s upcoming EP, ‘Aphropop, Vol. 1’ as she continues to build anticipation for the tape.

The Nigerian music scene is filled with great talents who are appreciated all over the world for our local sound. However, we’ve seen time and time again that our artists aren’t shy to acknowledge great music from other parts of the continent when they hear it. The South African Amapiano sound is hot at the moment and Zinoleesky is the latest artist to tap the sound as he sings over the afro-house rhythm for his new single, “Kilofeshe”.

Saying “ordinary things no fit move me again/ seun ti o fe she”, Zinoleesky continues in line with the cocky celebrity attitude we heard from his last single, “Ma Pariwo”. But it doesn’t get in the way of the catchy Amapiano beat produced by Niphkeys. It’s impossible to resist the beat’s invitation to dance.

One thing you can always count on the DMW boys to deliver, is good humour. On Dremo’s new single, “E Be Tins” he references the funny Ghanaian slang while bragging about the irresistible charm of their good looks. The song also features label mate, Mayorkun who handles the chorus and kills it in usual fashion. Fresh VDM produced the beat for “E Be Tins”, with dominant synths swirling around mesmerizingly to make the song catchy while Dremo and Mayorkun deliver expressive wordplay.

Pheelz has followed up his debut single, “Gobe”, featuring Olamide and Naira Marley with a new single titled “One Life”. The song introduces the renowned producer as a singer and songwriter as we hear him laying down melodic vocals over the self-produced beat. He already showcased his skill at making dancefloor bangers with his catchy production on his debut single, “One Life” as well as his production contribution to the catalogue of hitmakers like Tiwa Savage, Olamide, Fireboy DML and others. For “One Life”, he continues to impress, this time embracing the ambient sound of the South African house genre while infusing horn samples to make it more distinct. The tranquil ambiance of the beat fits with the carefree message of his lyrics, saying “I go live life like I don’t care”. We made it to another weekend and deserve songs like this to remind us to rest and relax.

Oma Mahmud is back with a new release ahead of the year-end. For his latest, the singer releases a new and energetic heavy rock-influenced single titled “NOW!!!” which is rife with urgency and anger against the oppression that many of us have faced through this year. He sings “I want to fight my oppressors but I don’t know how/I need my justice, I need it right now” he chants loudly on the song’s hook, trying to mull over his personal feelings about the actions that have plagued this year including the End SARS protests that shook the nation over a month ago. Though he’s not able to offer solutions to the many problems that Nigerians face in their country, “NOW!!!” is an honest and heavy look into the mind of a young Nigerian who is looking to music as a form of cathartic release.

British-Nigerian rapper and producer, Aina More closes out 2020 with a fiery new track titled “Destiny”. Co-produced by Aina More herself and producer Musiek Mambu, the track begins with an attention-grabbing sample of the Seun Kuti afrobeat classic “Bad Man Lighter” setting the tone for what’s set to be two-minutes of unfiltered, bruising raps. “Black women are the prototype/Too busy working on my EP and too introverted for a chat” she raps cockily over a heavy afro-drill beat, speaking about her come up in the industry while giving listeners a peek into what she’s been up to this year. It’s clear that she’s rouding off with a bang.

Atlanta-based rapper $odaman is back with a new single titled “On the Way”, a boisterous new single which sountracks the rapper’s comfortable life as it details everything that he has experienced from the money to the girls and anything else that comes from the astronomical rise to the top. “Had to get up and go get it, ain’t no other way” he raps on the song, showing that the life he boasts of has not come easy but through constant determination and hard work to stunt on his haters. In the Kharkee-directed visuals, we see the rapper enjoying the spoils of his labour, and we’d certainly hate to be his opps right now.

ICYMI: Catch up on all the songs released earlier this week

Next Article Turntable Top 50: Davido and Omah Lay lead the pack this week