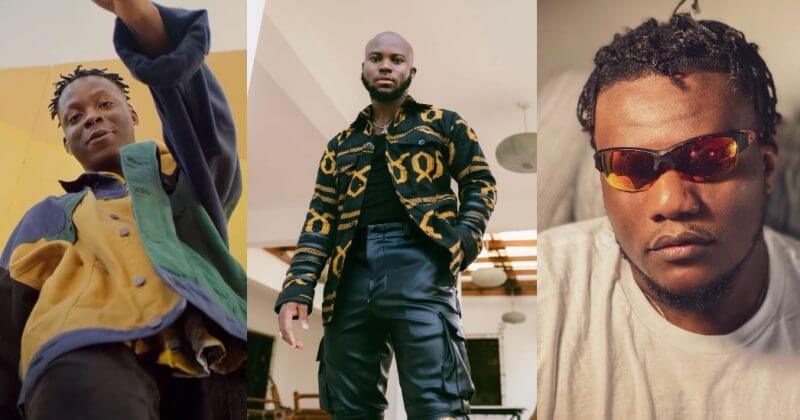 Songs of the Day: new music from Pheelz, Terri, King Promise and more

Music has been the driving force keeping us connected for the past ten months where we have been cut off from live experiences. As a result, last year, The NATIVE created our ‘Songs of the Day’ column as an avenue to curate some of the best and biggest songs from around the continent. In the time since its creation, the column has served as a means to discover music from niche, rising acts, while also spotlighting releases from the biggest artists on the continent. As artists continue to share their music with us, this year, it’s only right that we return to pointing you towards as much great music as we can.

Though the pandemic has denied us live shows, where the magical bond between artists and fans unfolds in real-time, artists have remained committed to sharing music with fans, so we continue to honour their art and create space and visibility for them. To end the previous week, we brought you recent releases from Psycho YP and Azanti, Kabza De Small, and Chi Virgo, as well as new songs from Stonebwoy, Black Cofee, Psiv, King Deetoy and Nviiri the Storyteller. So to begin the new week, we’re bringing you new music from Pheelz, Terri, King Promise, Jeune Lo, Rebecca Winter, DJ Consequence, Korede Bello, Oxlade, Hanu Jay, Salome and more. Enjoy.

For his first official release of the year, Starboy Entertainment singer Terri takes it back to familiar romantic settings. His latest offering, the P.Priime-produced single, “Come Around”, is the perfect listener as Valentine’s day draws closer. Over smooth jazzy production with upbeat drum patterns, Terri goes the mile to prove to his love interest that he’s certainly not the type to leave any room for mixed signals, as he’s ready to unconditionally love her. Singing, “come around everytime/dey your side/for my next life I go choose you again”, hr woos his love interest, admitting the lengths he would go to prove his affections.

There’s no denying that it’s been a difficult couple of months and music that provides a protective balm has done a lot to heal and soothe communities around the world. King Promise’s latest single “Alright” featuring Shatta Wale is a reflective number aimed to comfort and pacify listeners who may be going through life’s throes at this period. Singing, “We go dey alright/We go be just fine”, on the song’s hook, King Promise assures listeners that with God on our side, we will make it through the tough moments in life. Shatta Wale joins him on the song’s second verse, delivering a memorable verse with lyrics such as, “be your brother’s keeper/hope you know say blood is thicker/burn all your worries like cigar”.

After establishing himself as one of the most talented beatsmiths in West African pop, producer, Pheelz is now turning his sights on his solo music career. His latest single, “Wayward Girl”, is the follow-up to his debut single “One Life” which was released last year, both singles are said to feature on his upcoming debut EP, ‘Hear Me Out’ ,slated for release later this year. The upbeat single sees the singer address his encounter with a woman far more experienced than he is, and the feeling of longing for someone who’s heart can’t be trusted. Although we’re still raised brows at the song title for it’s negative connotations, we can’t wait to hear what Pheelz has cooking on his upcoming project.

Ivory Coast DJ Jeune Lio is paying homage to the beautiful women from his country’s capital. For his latest single “SGFA”, he enlists the help of Nigerian singer Oxlade, Ivory Coast rapper Didi B and American singer Chrystel for an upbeat single that aims to show love and admiration for Black women–not only from Abidjan but globally. In the recently released video directed by Samuel Ouedraogo, Jeune Lio makes sure to show off the city’s vibrant energy, his synergy with his collaborators and of course, the beautiful women of Abidjan. Jeune Lio certainly wants people to come and witness the beauty of Abidjan and he’s telling the world about his city, one track at a time.

There’s many qualities that women look for in their romantic partners, and financial security is one of them. On his latest single “Real Man”, Mavin singer Korede Bello makes a compelling case for his love interest to quit playing games and fall in love with him. Singing, “Take my money, make I treat you good/Let’s go shopping, anything for my queen”, over the upbeat production by Ozedikus, the singer states in no uncertain terms that he would like his partner to “chop his money”, expressing that spending on her makes him happy and fulfilled in the relationship. Not bad…

Before 2020 rounded up, DJ Consequence released his debut EP, ‘Vibes From the Future’, and to start off the new year, he’s giving befitting video treatments to the EP’s standouts. The dancehall leaning single “Uber (Refix)” featuring Hanu Jay has just received the vibrant Dammy Twitch touch with the a recently released set of visuals. The eerie video sees both artists looking driving down a quiet road before they soon enter a psychedelic world bursting with daring aesthetics and particularly an inventive sense of fashion.

For her first single of the year, British-Nigerian singer Rebecca Winter has just linked up with rapper Mulla Stackz for a new romantic number titled “Diamonds”. Here, diamonds refer to both artists sing requirement for their partners to stay exclusively committed to them (“they ain’t got a chance with you/they must be bluffing”) and the need to be dripped out and spoiled with affection and diamonds (“someone who is balling and can treat me right/pricy is how we roll”). This is the perfect r&b number to start your week.

Canada-based Nigerian artist Salome has just released her first official single of the year titled “Lover’s High”, the follow-up to her debut EP ‘Mask Off’ released in 2020. In the romantic number, the singer addresses a love interest, requiring that they both synchronise their energies and get closer together by dancing and letting go into each other’s arms. With Valentine’s day just around the corner, this is a fitting song to share with a love interest in your life.

Next Article NATIVE Exclusive: The Cavemen Are Starting A Renaissance In Pan-African Music