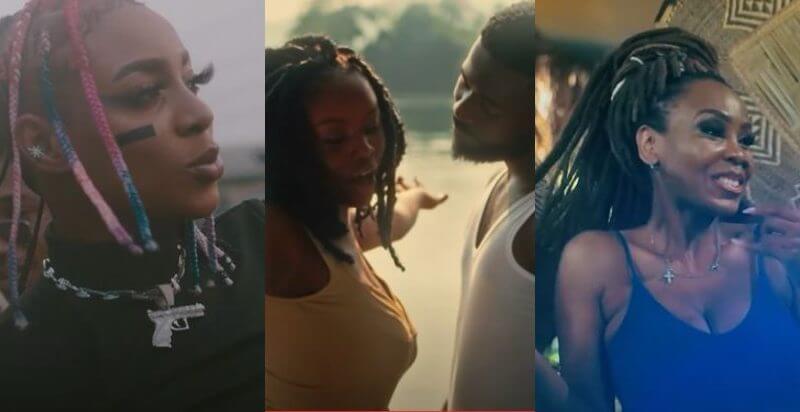 Last Friday, we brought you new releases Rema and Seki Supervillain, a collaboration between Skillz 8Figure and Psycho YP, a momentous remix of Zinoleesky’s Amapiano anthem, and much more. Today, we’ve combed through all the releases you may have missed over the weekend, bringing you a curation that includes new single releases from GoodGirl LA and DJ Zandimaz, as well as new video drops from Focalstic and Davido, Adekunle Gold and Patoranking, and much more. Dig and enjoy.

After closing out the year with “D4DM”, a PSA against physical and emotional abuse in relationships, GoodGirl LA has opened her headlining account for the year with the swaggering “Bando”, a few weeks after stealing the show on Vector’s “Early Momo”. “Trappin’ out the bando, many bad boys dey my back o/fine girls dey, dem a konto/girls don blow, no promo”, LA rhymes in the first moments, laying down a self-assured precedent that carries throughout the song’s duration. Backed by a clanging percussion pattern, she wields her guttural voice with a playful authority, resolving out loud that money is her priority. The music video also helps in underpinning her conviction, as it shows LA performing at her bando, along with a posse that includes a band, and mean-mugging men and women.

Last year, Focalistic shot into unreserved ubiquity in South Africa on the back of multiple hits, the biggest being “Ke Star”, the thumping club anthem produced by Vigro Deep. The song has also improved profile across the continent, and he recently dropped a phenomenal Davido-assisted remix, which will certainly allow the song’s pan-African presence to rise. A week after its release, the rapper has shared the video for “Ke Star (Remix)”, and in contrast with the all black motif in the visuals of the original song, the new Dammy Twitch-directed video is packed to the margins with bright colours. While Focalistic and Davido perform, the video features a myriad of dancers mixing legwork moves from South Africa, like the vosho, with the vigorous variations of the zanku that has come to rule Afropop in recent years.

Adekunle Gold’s third studio album, ‘Afro Pop, Vol. 1’, earned the singer a fresh round of plaudits, mainly for its glossy pop sheen and the evolution that led up to it. AG has remained consistent with post-release promotion efforts for the album, and he recently dropped the video for one of its standout tracks, “Pretty Girl” with Patoranking. Emboldening the song’s groovy, dancefloor-ready inclinations, the eye-popping set of visuals features its fair share of dance moves, while both singer perform their sets while styled in retro-inspired, brightly coloured outfits.

He may not be overtly brash about it, but Kizz Daniel is one of the best around at extolling the pleasures of living the rockstar lifestyle. “Flex”, his new single following late January’s Amapiano-indented “Currently”, is the latest example of how effortlessly adept the singer is at evoking a good time while using his life as the main reference point. “See I just wan flex, make nobody hala for my head”, he proclaims on the chorus, casting a languid spell over groovy production inspired by Yourba highlife and Juju. Directed by the Alien, the accompanying video is situated in a retro-inspired cabaret, highlighting the positive perks of stardom as Kizz Daniel thrills the audience in the room alongside a live band.

Of all the rappers prominent on the Asakaa wave, Jay Bahd is the one who leans into the obvious Pop Smoke influence the most. While his admiration and channelling of the revered Brooklyn Drill can cross into the terrain of cosplay at times, his booming voice and barrelling flow is potent and riveting enough to hold its own ground. On his new single, “Go Get”, the rapper boasts of his grind mentality and the spoils he’s accrued as his fame has risen in the last year. Seemingly inspired by receiving Off White merch from Virgil Abloh, the video sees him giving props to the Ghanaian-American designer, rocking his new fits in the hood while performing amongst friends and young people in his community.

Bisa Kdei and Gyakie linked up for the first time on the latter’s 2020 single, “Sor Mi Mu”, forming an impressive partnership on the song. They’ve gone on to reprise their combo on Bisa Kdei’s new song, “Sika”, another romance-driven song where they act as love interests reassuring each other of their undying affections. Over a bright neo-Highlife beat, the pair complement each other very well once again, singing with a synched up sense of harmony. In the accompanying video, set at a rural location, they visualise their roles as love interests looking forward to seeing each other after a prolonged period apart, adding to the song’s endearing quality.

Stonebwoy’s star power is undeniable. At the moment, there aren’t too many Ghanaian artists playing on his level of popularity, and his latest collaboration with Grammy-nominated Jamaican singer Etana is the latest proof. On “Proppa”, the two artists make a delightful pair, singing like star-crossed lovers over an Afro-Caribbean beat that finds the middle ground between their unique sensibilities. “If you want to be my lover, then come at me proper”, Etana sings on the hook, setting the tone for a playful and catchy tune about both parties fully committing to a romantic situation.

Last October, NATIVE Trybe alum J Molley released ‘All is Fair in Love & War’, a statement-making project showcasing his credentials as one of the more exciting Trap-inclined artists on the continent. Keeping the tape’s momentum going, he’s shared the video for “Want the Rack$”, a standout which features South African rap colleague Nadia Nakia. On the paper chase-themed song, J Molley’s melodic cadence makes for a nice juxtaposition with Nadia’s sturdy, unrelenting bars. In the video, set in a gaudy mansion, J Molley moves around with conviction while performing his set, while Nadia is captured in a sultry setting, as she reels off her raps while clad in a lingerie set, surrounded by an overflow of dollar bills.

In an utterly male-dominated House music scene, it can be rare for women DJ/producers to corner mainstream attention. South Africa-based Zimbabwean DJ Zandimaz scored her first smash hit with late last year’s “Emathandweni”, a delightful Amapiano song with vocal appearance by Nokwazi. Hitting the ground run this year, she’s just dropped “For Me”, a soulful and catchy cut much in the same vein as her preceding song. Co-produced with Ceejay and Chuchu, the song spots bludgeoning log drum percussion, sunny piano and a buzzing synth bassline as its musical foundation, setting the stage for Michelle to sing romantic words of affirmation. Dedicated to the natural beauty of her home country, the video captures Zandimaz and Michelle basking in the seaside and lush greenery of Vic Falls. There’s also a party scene, where Zandimaz holds the sway over the crowd with her music.

Banky W and hugely popular actress Adesua Etomi-Wellington are getting set to welcome their first child to the world. The news filtered through late last, with pictures of the pair—Adesua with her baby bump—flooding the timeline. Turns out, those pictures are off the music video for Banky’s latest single, “Final Say”, a religious cut celebrating the pair’s marquee blessing and preaching a message of hope to believers. Over the Tropical House beat by legendary Cobhams Asuquo, Banky urges listeners to keep faith in God because he answers in due time. The sun-soaked video captures Banky and Adesua singing the song’s lyrics with an exuberant edge, culminating in a visual representation of their enthusiasm and joy. The song is expected to feature on ‘The Bank Statement’, Banky’s long-announced album currently rumoured for release later this year.

Next Article The Shuffle: Celebrating the legendary Dr Frabz through 5 essential songs