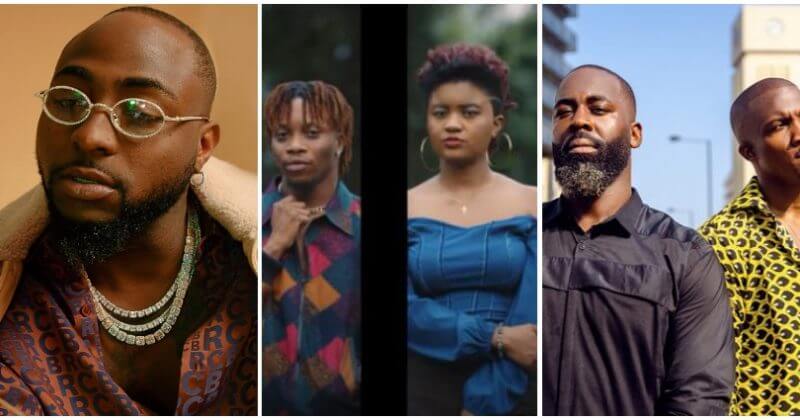 Last Friday, we brought you new releases from Niniola, Simi, Olamide, Tekno and much more. To start your week, today’s selection includes a new international collaboration from Davido, the new track from celebrated Nigerian comic Basketmouth, the lead single off the upcoming tape by NATIVE Trybe alum, J Molley and more. Dig in and enjoy.

Over the course of her growing catalogue, Dunnie has fashioned herself into a specialist of love songs defined by charm. For her latest single, she reached back into her EP, ‘Four’, delivering the remix of standout cut “Overdose”, featuring one of afropop’s resident loverboys, Oxlade. Together, they pair up for a soothing and sumptuous cut about the intoxicating rush of feeling wholesomely loved by a partner. The newly released music video for “Overdose (remix)” leans into the song’s breezy edge, with both singers performing their set at a rustic location, alongside several extras who add camaraderie and colour to the set of visuals.

After years hovering around and occasionally get involved with the music industry, celebrated comic Basketmouth released a solid debut single last year, hinting at a full project but never actually delivering. Now Basketmouth is headlining a new single, “Myself”, and it features vocal contributions by breakout star Oxlade and rap duo Show Dem Camp. Beyond linking the artists over a colourful, highlife-indebted beat by Ducktor Sett, “Myself” carries Basketmouth’s directorial fingerprints in its message of blocking off external noise and focusing on personal hustle.

“I can’t kill myself o, otumokpo [diabolical charms] no work for me”, Oxlade sings on the hook, a line that has Basketmouth’s plaintive sort of humour written all over it. Oxlade also handles the first verse, riffing on the unsuccessful attempts of gossipers and naysayers in distracting him. SDC’s Tec and Ghost follow suit, sharing space on the second verse where they recount their growth and the role conviction played in their ongoing success. Although he doesn’t sing or rap a line, Basketmouth’s curation skills proves invaluable to ensuring “Myself” is a resonant jam with strong replay value.

From Summer Walker to Teyana Taylor, Davido has established a flair for forming memorable partnerships with R&B singers whenever he gets the chance. For his latest international collaboration, the afropop superstar has linked up with veteran R&B singer/songwriter, Sevyn Streeter, for her second single of the year, “Kissez”. Sonically carried by acoustic guitar riffs and sparse but groovy percussion, “Kissez” plays on the sensual side of the romantic spectrum, with both singers trading carnal come-ons, across separate verses and on a shared chorus. On his verse, Davido lets his outsize persona shine through with references to his deep pockets, balancing Sevyn’s bleeding charm with his playful and magnetic contribution.

NATIVE Trybe alum, J Molley has spent the past few weeks building up anticipation for his upcoming project, ‘All is Fair in Love & War’. Ahead of its release later this month, the South African-rapper dropped the lead single, “Ang’na Stress”, in late September, featuring a catchy hook from Costa Titch and a verse from Yanga Chief. With J Molley taking charge of the first verse, the song finds all three artists touting their easy-going lifestyle, as they throw out vivid brags over a gaudy trap beat. The new, accompanying video for “Ang’na Stress” drives their point home, with all three artists rapping their bars while throwing around wads of cash and surrounded by women in a neon-lit room.

Since her breakout moment on Cassper Nyovest’s “Move for Me”, Boskasie has been slowly but surely building up to her moment in the spotlight. Later this month, the South African singer will be releasing her debut EP, ‘We Are Gold’, a project she describes as a short journey on what it means for Black women to own their story. Ahead of the EP, she’s shared “Get Racks” as the lead single, and it finds her in an overtly confident mood. “I dunno if you can see, this life was built for me”, she fervently proclaims over the stomping EDM-inflected beat. Her attitude sets the stage for a peach of a verse from SA rap veteran Youngstacpt, who goes on a tirade against gender-based violence. “Get Racks” sets a high bar ahead of Boskasie’s debut, and if it’s this pointed and topical, then we are in for something special.

While he’s shown that he can still get into the commanding rap form that led to his breakout, a significant portion of Phyno’s work since his 2016 sophomore album, ‘The Playmaker’, has been defined by his versatility. His latest single, “Never”, continues to chart the course that has proven him to be a proficient melody slinger, as he delivers a mid-tempo romantic cut. “Anything wey go break us, never oh never oh/I say we go dey, ever oh ever oh”, he sings over Blaq Jerzee’s sunny and bouncy production, expressing his sentiments in a rather plaintive format.

Few weeks back, Supa Gaeta launched the rollout for his upcoming EP, ‘Supa SZN’, with the release of the Oxlade-assisted lead single, “Text Me”. Continuing to drum up anticipation for the project, he’s shared the penultimate track “Gimme Dat” as the second single, and it further hints at a breezy direction for the EP. Joined by Fresh Meat alum Twitch 4EVA, over summery piano chords, digital strings and a groovy percussion, both singers pair up for a club-ready set that describes the lustful thoughts that are omnipresent on dance floors. Supa Gaeta leads the way with the snappy hook and two verses, while Twitch adds his trademark, playful flavour with a delightful verse.

ICYMI: HOW FASHION COULD GREATER INFLUENCE THE MUSIC INDUSTRY IN NIGERIA

0010
Previous Article Get to know Mannywellz: 6 essential tracks to prepare you for ‘Mirage’

Next Article Best New Music: Ictooicy’s “9 Lives” is a tale on the complexities of romantic love