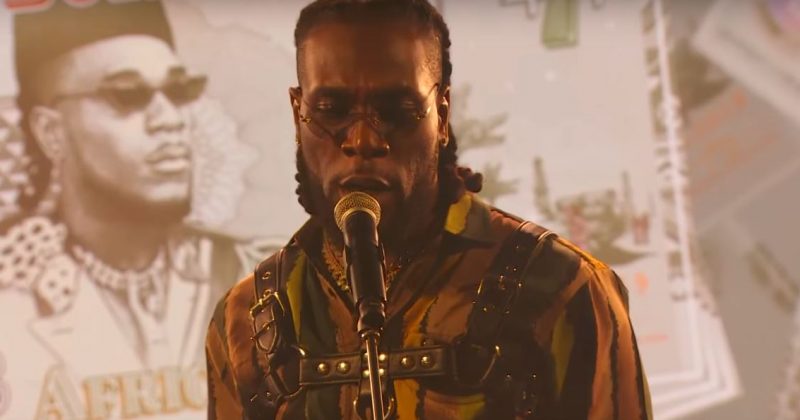 6 videos you should watch this week

Burna Boy’s – “Comedy Central Medley for Ye and Anybody”

The success of Burna Boy’s ‘African Giant’ has made him the trendy face of African music in America, featuring on songs, billboards and making TV appearances. He was recently featured on “The Daily Show with Trevor Noah” where he gets in tune with his more goofy side and talks about the Afro-fusion sound he’s championing, the Coachella poster that inspired the name of his project title, his belief that Africa is the origin of music and performs a medley of “Ye” and “Anybody”.

Known for a fluidity that speaks to their Yoruba namesake, New York R&B and rap duo, Oshun has released the accompanying music video for “We’re Yung”, one of the standout tracks from their first full length in 3 years, ‘Bittersweet vol. 1′. Like the song, the music video Annie Bercy directs portrays them as free spirits, running through the train station before the scenery changes to a fairytale-esque sunflower field where they trail a presumed love interest while performing their soothing verses.

Attitude’s “Higher Your Body” seemed destined to make a wave on radio and on the internet with the catchy vibe of the beat Tuzi produced and the weight of his guest list that featured contributions from Mayorkun, Reekado Banks and BOJ when it was released back in June. He has upped the ante even further by releasing a Bash Em directed music video showing all the artists in dimly lit scenes while they perform their showy verses.

After spending nearly a month in a Swedish jail, A$AP Rocky is back to releasing music, taking on the pigs in his comical new music video for “Babushka Boi”. The Dick Tracy-inspired video is directed by Nadia Lee Cohen, opening with Rocky and his quirky looking crew of bandits robbing a bank tend getting chased through the streets by the police who are made-up to look like pigs. The facial prosthetics they wear makes for a cartoonish depiction of their gangster narrative with cameos from A$AP Ferg, A$AP Nast, Kamil Abbas and Schoolboy Q who join Rocky to face off with the pigs in a bloody gun battle that ends with the big turning into sausages.

Vector has spent a significant amount of time in the rap game to make him the OG to younger rappers. This seems to inspire him to spit conscious bars, dropping gems meant as advice and speaking to the youth culture. His latest offering, the music video for “Oja (Drugs and Friends)” discusses the peer pressure that leads to drug abuse.

As a cultural phenomenon, Drake as yet is unmatched. With unrelenting strings of singles, albums, playlists, whatever he puts his vocals on is almost instantly ordained to be a hit. With all the success, sometimes one life isn’t enough to enjoy it all, so what better way to cap an illustrious life than resting with your hard-earned money for eternity, or at least however long bills can last underground. This makes sense because he’s the self-acclaimed Petty King and his newly released music video for “Money in the Grave” featuring Rick Ross shows him digging a grave and covering it back up. With the gritty black and white filter, both artists’ tough bars are amplified in a celebratory way as we watch clips from Drake’s most glamorous moments from the last couple of months; getting a giant 767 plane and bringing out the Raptors NBA championship trophy while on stage at OVO Fest.

ICYMI: Watch the music video for Burna Boy’s “Anybody”

Next Article Larry Gaaga and Patoranking dedicate their new collaboration, “In My Head”, to fallen friends