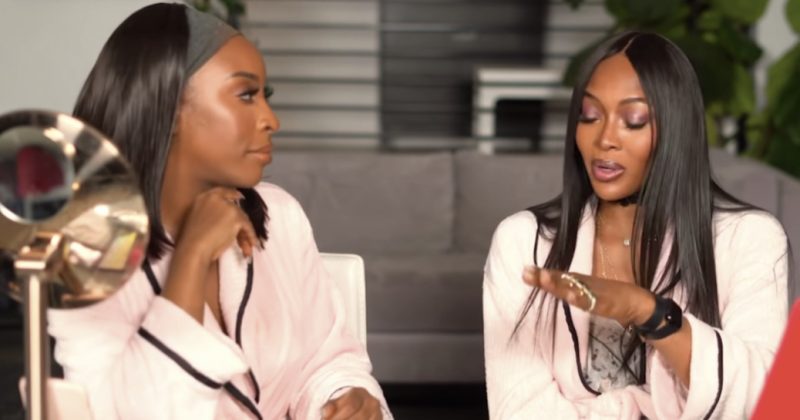 There is nothing more endearing than seeing two beautiful black women support and love each other in the spaces they exist. Our latest favorite girl duo is model Naomi Campbell and beauty Youtuber, Jackie Aina linking up to do their makeup and have honest conversations. In the 10 minute clip on Naomi’s youtube, they discuss secret makeup hacks and answer questions from lipgloss or lipstick to tampons or pads.

Earlier this year, La Meme Gang member, Darkovibes released a single “Mike Tyson” which featured Runtown. Over the beat mid-tempo beat produced by WillisBeatz, both artists gave a confident performance where they waned off their competition, as they channelled the fierceness of the boxing legend. The new music video, directed in Accra by Zed captures both Runtown and Darkovibes in a boxing ring as they deliver their verses, as well as other clips with dancers in different parts of Ghana showing off the country’s culture.

Chidinma and Flavour continue to wear their new love on their sleeves. Since the release of their joint EP ’40 Years Everlasting’, they have been releasing music videos for singles off their project. Their new music video is for “40 Yrs” Lovestacle, a short 14-minute clip, which shows traditional Igbo marriage introduction.

The 5th episode of the current season of MTV Shuga Naija premiered two days ago. In the 21-minute run time of the episode, teachers and parents are still in disapproval of Q-code, the student-run safe space for discussing sexual reproductive health.  During the episode, various students struggle with the new information on practising safe sex with Wasiu refusing to use a condom with Simi while having intercourse and her friend falsely advising her about getting rid of the consequences of unprotected sex.

The first official trailer for Marvel Cinematic Universe film ‘Black Widow’ was released today. In the trailer, Nat played by Scarlett Johansson shows her reuniting with her sister and the rest of her assassin family who come back together to go back to “where it all started” and defeat whatever threat lurks there. Black Widow will mark the beginning of Marvel Studios Phase 4 when it is released February 1, 2020.

Jinmi Abduls continues his run of charming, romantic tracks with new single “Babaye” which he has now updated with a befitting music video. In the Naya Effects-directed music video, Jinmi and a love interest can be seen taking a nap in a hotel room but are woken up in a mysterious underground world, haunted by women clad in black and wearing masks. ‘I get biggi problem, I too like Lagos girls’ he sings, trying to make sense of this new world he and his lover have been transported to.

ICYMI: Clips from Santi’s Camp Flog Gnaw performance and 5 other videos you should see this week

Next Article All the breakout stars from each year this decade