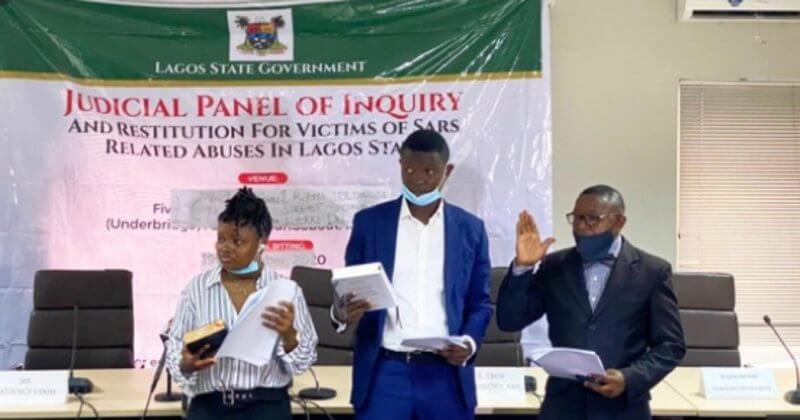 An update on the nationwide #EndSARS judicial panels

Months ago, following the chaos and violence that ensued from the #EndSARS protests, judicial panels were set up across the 36 Nigerian states as part of the demands to signify that the federal government was committed to the eradication of police brutality. Led by Vice President Yemi Osibanjo and the National Economic Council (NEC), directives were given to the various state governments to set up an impartial panel that would sit and hear the victims of SARS-related abuses, particularly in Lagos state where the panel had jurisdiction to hear victims of the Oct. 20 horrors.

Since then, the various panels have been bogged down by meticulous efforts to derail their continuance, from the Lagos state government forensically investigating days after the toll gate violence to the Nigerian army challenging the validity of the panels and in some cases, restricting investigations to some of their barracks around the country. Needless to say, our worst fears about the judicial panels resulting in nothing more than a farce, as they have been known to do in the past, is correct.

Nigeria: Denials and cover up mark 100 days since Lekki shooting
•No justice for victims
•Supporters of #EndSARS movement continue to face intimidation
•Authorities yet to initiate concrete police reforms

Yet again, the Nigerian people are being served the long end of the stick with another lackadaisical attempt by her government to wade off the international press and larger calls for justice and restitution. However, a few months ago, we stressed the importance of staying woke and remaining vigilant so that we may properly monitor the processes and progress of the various panels in Nigeria. Despite our lack of faith in the current administration, these panels are currently the only way for many in our community to receive compensation and justice for their loved ones, after being victimised by the very people sworn to protect them.

In the new year, the memories of the years of abuse and violence sustained by Nigerian youth at the hands of SARS officials and members of the Nigerian police force across the country cannot be forgotten. All across the country, judicial panels are currently underway to sit for their first hearing of the year following the adjournments from last year’s hearings. Each state is moving at a different pace with some counting some forms of progress and others entirely at a standstill.

Down south, the Oyo state panel has been adjourned for another two weeks while the Ekiti panel has begun offering remuneration to victims. However, the Lagos state judicial panel has been derailed by the Nigerian Army who pulled out of the hearings when new evidence affirming their violent use of bullets on October 20 surfaced. In other states such as Anambra, the panels have refused to sit altogether due to a lack of funding and other necessary approvals, while in Kwara, the panel has concluded its findings entirely and is now deliberating.

On December 10, the Judicial Panel of Investigation on Police Brutality in Anambra State adjourned the hearings of victims of SARS-related abuses, particularly the infamous Awkwuzu SARS, the deadly station which is responsible for over a thousand extrajudicial killings in the state’s history. The panel is said to have heard over 300 victims during its time, with calls for CSP James Nwafor to face the panel alongside Peter Obi who was state governor during these deadly massacres. However, this year, the panel has consistently failed to resume operations with reports stating that the Anambra State Association of Town Unions Hall, the venue of the sitting, is still locked two weeks since its resumption.

According to HumAngle, the issue of inadequate funding, which led to the suspension of sittings in December last year, has not been resolved as some members are still complaining of the non-payment of their allowances. The investigation also found that the panel has exhausted the 12 sittings approved for it by the state government and a further approval for an additional 24 sittings is required to enable the panel to exhaust the load of petitions before it has not been granted.

Just In : Again, Anambra Judicial Panel of Inquiry scheduled to resume sitting today could NOT resume due to ‘logistic reasons’

Credible sources revealed that the State government is yet provide the panel with needed funds to continue sitting.#EndSARS pic.twitter.com/SykxLTFqss

The Bayelsa judicial panel started the new year with a level of promptness that trumps other state panels. Resuming hearings on the 6th of January, the panel has gone on to host over seven recorded days of hearings for victims in the state. This is because the deadline for submissions of claims was set by its Chairman Justice Young Emmanuel Ogola (Rtd.) for the end of January. The panel has been accurately keeping the public informed through their social media accounts which include video recordings of the hearings and a summary of all the cases heard each day. Currently, there are six cases that have been adjourned till February.

The Ekiti State judicial panel of inquiry has resumed its hearings of SARS-related abuses since the 5th of January, following a two-week court recess for the Christmas holidays. Since its commencement, it has heard the testimonies of over 20 victims, including a young man named Anthony Onuagbara who lost sight in his right eye due to SARS brutality in 2012 as an NYSC corps member, and which subsequently resulted in his inability to secure employment till date. Currently, the panel has now begun awarding monetary compensations to victims in the state including recommending a sum of 1million Naira for one victim.

Edo
According tothe Chairman of the Edo State Judicial Panel of Inquiry on Police brutality, Justice Ada Ehigiamuose (RTD), the Panel has concluded over 80 cases out of 100 cases received. Although not all of the cases have been concluded, the Edo state government have now given the state panel an extra six weeks to submit its report and findings. This comes after the expiration of an initial ninety-day period given to them to come up with their findings. The panel will be using the time extension granted to put finishing touches to the number of petitions still before it.

Since resuming its hearings on January 4th, the Kwara state judicial panel has continued to listen to several complaints from victims of SARS abuses within the state. On the 27th, it was announced that the panel had now concluded its public hearings and would now be deliberating on the cases reported and collating their final submissions in a report for the state government. Kwara is one of the first states to conclude its hearings and findings.

The Kwara State judicial panel of Inquiry has ended it’s public hearing today 27/01/2021.All the 25 petitions earlier filed in to the panel has been fairly heard and concluded.The panel is left with deliberations and possible recommendations and final submission of report

The Lagos state judicial panel resumed on the 5th of January after a short recess for the Christmas holidays. Since then, it has continued to hear the petitions and complaints of victims and families of victims who have suffered at the hands of SARS and those who were injured, hurt or missing from the Oct. 20 horrors. However, efforts to continue the hearings have been derailed by the Nigerian Army, which has now pulled out of the Lagos State Judicial Panel as more evidenceresurfaces confirming that Nigerian soldiers opened fire on peaceful protesters last October.

According to reports, the Army and its legal counsel had consistently failed, three times in a row, to appear for the hearings prior to pulling out. This comes after the Reddington Hospital testified at the Judicial Panel that they treated many gunshot victims on October 20,21, and 22, evidence that proves that the Army had done a lot more than fire blanks into the air, as they claimed. The matter has now been adjourned till the 27th of February to give time for an adjournment by the recently-elected Chief of Staff.

The panel’s judicial proceeding is particular about the fundamental concept of justice & equity & as such authority is exercised according to the principles of Due Process of Law & the doctrine of Fair Hearing. This is what most misconstrue as a state of helplessness & weakness. pic.twitter.com/DMVa4sWpyz

The ongoing judicial panel in Oyo state commenced on the 26th of January with most of the petitioners in attendance and represented by their legal counsel. However, the hearings have now been adjourned till the 16th of February due to non-service of process on the Commissioner of Police and the State with several other cases adjourned until much later in the month. It is yet to be determined if the panel has concluded on any of the ongoing hearings.

…reassures on dispensation of justice without fear or favour

The #Oyostate Judicial Panel of Inquiry set up by Governor Seyi Makinde to look into cases of victimisation and brutality by the Police, pic.twitter.com/MpK6zgAJPm

The Rivers state panel resumed on the 5th of January and has heard over 189 petitions since its inception last year. Currently, the panel has now concluded its sitting and is deliberating on the petitions filed. According to the panel chairman, Justice Chukwuneye Uriri (rtd), there were over 70 cases discarded out of 187. The panel’s recommendations would soon be submitted to the state government in due time for immediate enforcement.

The sitting of the #EndSARS Rivers State Judicial Commission of Inquiry has come to an end. The Chairman of the Commission, Justice Chukwuneye Uriri (rtd) said, one hundred and eighty-seven (187) cases were entertained and seventy-six petitions struck outhttps://t.co/ErPelmzACq