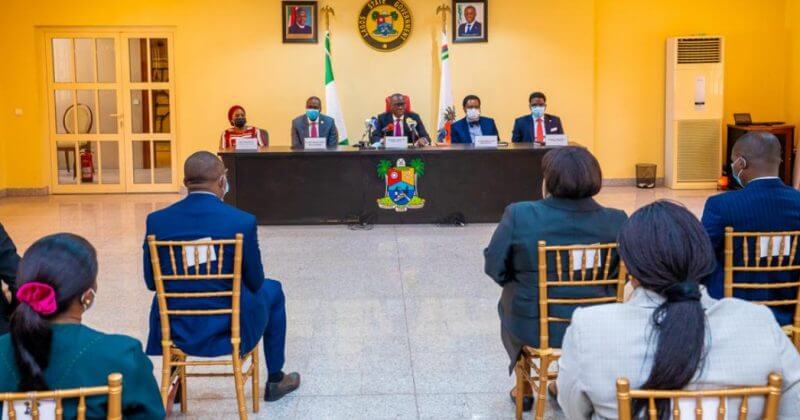 Over the past two weeks, young Nigerians have been asking the government very difficult, yet, pertinent questions about their demands to #EndSARS. We cannot forget what happened on the 2oth of October, and we’re all demanding answers as to who gave the army its command to use brutal force against peaceful protesters in Lagos in response to our simple demand for them to  simply bring an end to a rogue Police Force Unit. So far, every response from the government has been less than satisfactory, and even though SARS has been disbanded in theory, in reality, people are being killed in the comfort of their homes, deafening bullet sounds still fill the air and violent armed forces continue to patrol the streets – markers that the government are yet to understand how best to serve and protect the Nigerian people.

Over the weekend, however, results began to look imminent. During last week, various state governments around the country announced the setting up of judicial panels to probe into the excesses and atrocities committed by ex-SARS officers. So far, Ogun, Delta, Lagos, Nasarawa, Ondo, Anambra, Plateau, Edo, Imo, Enugu, and Kaduna are amongst the states that have currently announced and begun inquiries into the victims of SARS brutality and human rights violations by the Nigerian Police Force. The Lagos state panel has been hearing inquiries from victims of the Lekki toll gate incident, which began its first sitting last week and is set to hold for another six months at the Lagos State Court Of Arbitration.

The makeup of each judicial panel is largely similar from state to state. The panel will be chaired by a retired High Court Judge and other members will be selected by the State Governor. The other positions available will be from representatives of Civil Society groups, The Police Force, The National Human Rights Commission, as well as two two ‘youth’ representatives. The National Economic Council has also directed all state governors to open a victim’s fund to enable the payment of monetary compensation to survivors of police brutality, in addition to the compensation bereaved families have been receiving.

Here in Lagos, it was announced last week that the youth representatives for the ongoing inquiries in the state were Rinu Oduala & Majekodunmi Temitope. In a detailed Twitter thread, an observing citizen shared a breakdown of the actions at the Lagos Court of Arbitration. Three cases were read last week including the accounts of Mr Okoye Agu who spent 47 days in SARS detention, Mr. Ndukwe who became wheelchair-bound from an encounter with SARS officers, and Mr. Ebun Adegboruwa. According to the thread, the chairman adjourned the cases until November 3 citing that the Commissioner of Police had to attend the inquiry, which he did not at the time of the hearing.

Yesterday on November 3rd, the Lagos panel held the first sitting exclusively on the Lekki ‘incident’ set to feature an appearance from both the Lagos State Government (LASG) and the LCC toll gate representatives. According to Editi Effiong, who has been very vocal about the state of the panel online, the LCC claimed that the footage from the toll gate stopped recording at 8 pm due to network interference, and what had been recorded was only contained visuals as there was no accompanying audio. The footage, however, was not played yesterday and was blamed on “technical reasons”. The LCC MD, Mr. Abayomi Omomuwa also claimed that the footage circulated on social media of cameras being removed were not for surveillance but actually plate number recognition cameras used to identify vehicle type.

In his detailed thread, Editi Effiong also noted that the LCC was represented by a member of the LASG legal team and they were exchanging talking points with one another. Another red flag noted was that both the LCC and LASG line of questioning was designed to absolve them of any guilt. From his account, a few stark truths ring out, there is a clear conflict of interest in this legal choice. However, a member of the Nigerian Bar Association quickly picked up on this but he was told by the chair of the judicial panel that the current exercise was only for investigation and the rules of evidence would not be the same as in a court of law because they are guided by different rules.

This was the exact problem that many feared would occur as the government has earned itself a reputation for not coming through on their promises. There is a general sense of distrust from people on social media who fear that the decisions of the panel will end up being ignored, as the government has done in the past. Writer and human rights lawyer, Ayo Sogunro confirmed these sentiments when he shared a thread of past judicial panels that have been weakened by a history of inconclusive results.

10:33 The counsel representing Lagos State Govenment has arrived. It’s kind of weird how these guys are just late like it’s nothing.

The panel is still not seated by the way. pic.twitter.com/CsrQaeocFi

Dating back to 1999, there have been a number of human rights judicial panels set up to investigate atrocious killings and violence perpetuated by the Nigerian armed forces. The conclusions from grave instances such as the IDP camp bombing and the Zaki Biam massacre, on further inspection, showed little example of thorough, just investigation. Sogunro’s thread revealed that the reports from the past judicial panels were either ignored by the enacting bodies or the guilty police officers were further exonerated for their crimes. So why should we have faith that the current panels be any better?

The difference this time is that Nigerian youths are finding their voice more than ever before. At our disposal, we are utilising digital technology and social media to our advantage and it’s given us the propensity to galvanise in seconds as we saw during the two-week protests that took place across the nation. Today, we saw young Nigerians take active steps to join the ongoing judicial panel in Lagos – whether they attended in person or online – as well as young lawyers volunteering to provide competent legal representation for survivors of SARS brutality. Young people around the country have also begun civic education for the wider public as a means to equip and enlighten the electorate, thereby increasing our chances of getting our voices heard come 2023.

The mounting pressure seems to be working. Already we have seen the Lagos state governor, Babajide Sanwo-Olu renege on his earlier statement that there was no involvement of military personnel at last week’s attack in Lagos. In an interview with CNN yesterday, the governor admitted that, from the gathered footage, Nigerian armed forces are seen carrying out the attacks at the Lekki toll gate. The governor committed to a full investigation of what happened on the ground and ensured that he will channel the judicial report to all relevant authorities in the state to ensure that everyone is held culpable for their acts. Though we are yet to see any tangible results, the judicial panels are set to hold across different states for the next six months and we can only hope that, this time, the growing pressure from young Nigerians at home and in the diaspora will spur justice for the victims of state violence.

ICYMI: How the Festival of Lights captured the heart of the end SARS protests