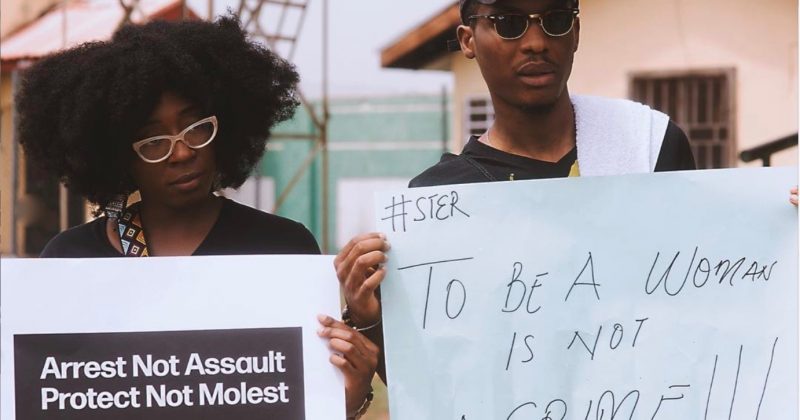 From The Protest Grounds: Speaking to the women of the #AbujaRaidOnWomen march

The more we understand sexual harassment in Nigeria, the more heavy lifting seems to be required for real change to happen. And if we don’t attempt to understand all the factors that come into play, we narrow our grasp on how adaptive the patriarchal system is, and how it is able to replicate itself within different societal structures.

Last week, 27th April, a joint police task force in Abuja arrested 70 women in Gwarinpa and Katampe Extension, detained and tried them in a “mobile court”, where they were sentenced to one-month imprisonment with an option of N3000 ($8) fine. Some of the women, who were forced to plead guilty and released after paying the fine, narrated their horrid experience, citing how police officers raped, assaulted and maltreated them. On Saturday, 4th May, protesters gathered in two of Nigeria’s megacities, Lagos and Abuja, to relay their frustrations, demanding that the arc of history be bent towards justice. Activist, Aisha Yesufu fearlessly led the frontline where protesters convened for the march to FCT Police Command Headquarters.

Prostitution is criminalised in Nigeria, but the same constitutional provisions also require that the accused must be found to be ‘persistently soliciting’. But the 70 women who were arrested were prosecuted extrajudicially. The uproar for the unlawful arrests has not only been because the accused policemen have not been charged, but also because this is not the first time such an atrocity has occurred. The police force have chosen to add to their agenda, club-goers, and any other female citizen they suspect in the society.

Nearly five years ago,  lawyer, advocate and CEO of Nigerian Women’s Trust Fund, Ayisha Osori, explained that many women had been abducted by the Abuja Environmental Protection Board (AEFB), who work with the Nigerian Police and Military “to make moving around Abuja dangerous for women”. Their main goal is to “supposedly make the city safe and clean”, but as Ayisha narrated, her young adult daughter who was out for the evening with friends, once called about 9:30PM, that she had been abducted by the agency.

Nigeria’s moralistic culture code is presumably poised to cleanse the society of subversives, and there are several institutions to jointly work together to rid the society of prostitutes. Alongside AEFB, there is also the Federal Society Against Prostitution and Child Labour in Nigeria (SAPCLAN), authorised to get prostitutes off Abuja streets and rehabilitate them. These authorities are tasked to jointly work with the police force to achieve their goals.

“I remember as far back as 2011 because this has also happened to me. I was in a situation where I literally came out of a club and was trying to get in a cab and they grabbed me as well,” one of the protesters, Coco Anetor-Sokei, told The NATIVE, amidst the marching protest. “If not because of my privilege, like the people I knew, or I could call that night, I don’t know how this situation would have ended for me.” In this manner, other participants of the protest conjured up memories of police harassment. “I think the behaviour of the police is emboldening the average Nigerian men on the road,” Teni Tayo, member of Abuja Literary Society, explains as Chioma Agwuegbo, founder of TechHer and key activist at the march, contends with an affirmative Yes! “Now they will not hesitate to call you Ashewo, disrespect you, or even try to pull you. Because they feel like it is state sanction. This is a bigger problem that will be difficult to even reverse. This is why it is very important for the government to come out and state categorically that this is not acceptable, that this is not allowed in our country, that women are respected.”

One recurring topic at the Old Parade Ground in Abuja is the odd fact that even law enforcement officers can be perpetrators. They are the civil force authorized to protect citizens but by their actions, they reinforce the drive of sexual predators. Many protesters held focus group discussions  in the spur of the moment too, where their discussion was centred on more harrowing accounts of harassment by a police force and the criminalization of prostitution in Nigeria.

“Something similar has happened to me before” narrated Sharon Anakame, a legal practitioner. “We actually went to a club, but we couldn’t get in. We were wearing sandals, the rule is to wear heels. So they just picked up everyone standing”. Her friend Maryam Ibrahim, who is also a legal practitioner adds, “They don’t tell you what your crime is, what you are violating. We were locked up overnight even”. Sharon and Maryam had to pay some money to get out. They were forced to plead guilty, and ended up paying N100,000 per head to be released; same format as the convicted 70 women.

Many times, movements go viral with elisions and omissions, and this has been the reality of the #AbujaPoliceRaidOnWomen. After the arrest of the 70 women, news headlines and social media accounts predominantly stated that all the women were arrested at Nightclubs in Abuja. Other reports have however surfaced since. Chioma Agwuegbo revealed on her official Twitter account that one of the 70 women—an NYSC corps member, visiting Abuja for Easter—was arrested while buying Indomie noodles on the roadside. The tweet included pictures that showed the youth corper was badly beaten.

Religious justifications for the #AbujaPoliceRaidonWomen has also tainted the reportage around the events. Claims like “the raid is an attempt to purify the land during Ramadan”, floated around the protest grounds. Provocative takes on the issue, like The Nation’s crassly-crafted headline brutally tagging all 70 women as ‘convicted prostitutes’ have also further conflated details. If the police force does not debunk misinformation with such intricacies, more flagrant psycho-social complications in how these issues are addressed are unavoidable.

However, the real crimes are hardly ever addressed directly by Nigerian authorities. Recall the massive attack on Yomi Shogunle’s—representative of the Public Complaint Rapid Response Unit—official tweet to address the raid, when he stated that prostitution “is a sin under the 2 main religions of FCT, and a lifeline of violent criminals,” as a justification for the 70 women who were wickedly beaten, raped and forced to plead guilty by his alleged colleagues.

The criminalisation of prostitution in Nigeria’s penal code is ill-defined, so the job of the task forces charged to keep these women off the streets has been distorted in horrifying ways. Their focus now is on utilising their sixth sense to abduct only females, who are in a club/at a place close to a club, for the way they are dressed at night. The woman is then accused of being a prostitute, beaten, raped, forced to plead guilty, sentenced, and fined. Illegally.

Movements are primarily used to maintain momentum and affirm identity, so tangible change still has to be created by other means because the system is primarily designed against women. But in protesting, action sparks more action; boldly occupying public spaces will set new forces into motion for justice to finally prevail. As Equals Africa, Stand To End Rape, and Market March continue to join forces, as they did in Lagos and Abuja last weekend.  More civil society organizations are taking the lead and converging to fight this battle together: there will be two protests on Friday, 10th May: One at the Nigerian High Commission in London, and another in Abuja at Eagle Square (Car Park Entrance) 9:00AM. As Chioma Agwuegbo explained to The NATIVE, “Left to me, I think we could go into everyone’s house and drag them out to come for the march. There is more [relevance] about people speaking up than there is about who is organizing [the protest]. We are going to keep advocating that the perpetrators of these crimes be brought out, be punished, be dismissed from the force, be tried. And that the women be compensated and be treated both emotionally and physically.”

Because good press or–no press at all–is all you need to hide a grand lie, police (sexual) harassment and assault keeps reoccurring. In a sense, the masses get convinced that it has been defeated or that a solution is developing. But we are hitting rock bottom as the elite cohort leave us to keep falling.

The work to solve this is akin to trying to get a thread into a needle’s eye in the faintest light. The eye is almost non-existent as you need light to see in the first place, and the eye obviously, is small. But once the thread goes through the needle’s eye, things can begin to get patched up. Until then, the thread will be twisted, consistently shoved into a minute hole, or the trials will be many and may fail.

Join the march and let your voice be heard to stop Abuja police raid on women.

On the protest against Abuja Police Raid on Women, Fisayo Okare writes for NATIVE, from Abuja. Tweet at her @fisvyo