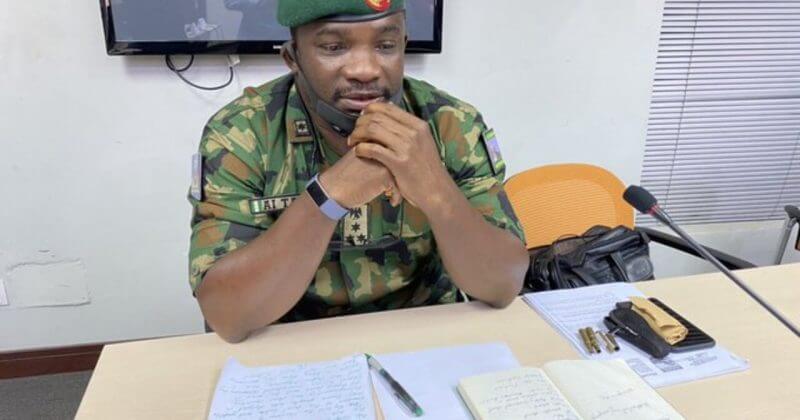 On Saturday, November 21, the judicial panel of inquiry set up by the Lagos state government held its eleventh public sitting. Initially saddled with the responsibility of looking into complaints of police brutality, investigating the Lekki tollgate killings of peaceful #EndSARS protesters by soldiers of the Nigerian army has been added to the panel’s list of duties. With a wider scope that includes one of the most heinous acts of state-sanctioned brutality in Nigeria’s third republic, attention on the Lagos State judicial panel has been intensified, to ensure every inch of the truth is uncovered.

Livestreamed on social media, and with real time Twitter threads from multiple sources present at the sitting, thousands of concerned people were given access to follow the day’s happenings. At Saturday’s public sitting, the panel gave sole attention to the Lekki tollgate massacre, reviewing CCTV footage provided by the Lekki Concession Company (LCC) for the first few hours. The footage emphatically showed that soldiers of the Nigerian army arrived at the Lekki-Victoria Island tollgate at 6:41pm, a timing that was consistent with eyewitness reports shared on that October 20, 2020 evening.

Mainly captured from a bird’s eye view, the footage isn’t close enough to ascertain every single detail, but it’s clear enough to confirm (AGAIN) that the army was present at the protest ground and unarmed civilians were scurrying around for protection against them. It contradicts (AGAIN) the army’s ongoing fake news campaign, which started out with outright denials and has evolved into twisting the facts of those tragic events, such as, claiming they were there to ensure the safety of protesters against hoodlums, lying that no lives were lost or serious injuries were recorded, since only blank ammunitions were employed, and they were shot in the air rather than at protesters.

According to footage from LCC, uniformed men arrived at the Lekki toll gate at 6.41pm on October 20. CNN said the shootings began at 6.43pm.

Given those times and that CNN hadn't seen the LCC video, it's going to be very hard to disprove that viral report. (1)

The footage also shows that contrary to the claims that they closed operations at the Lekki tollgate at 4pm due to the state-imposed curfew, the LCC was still carrying out its duties on those grounds, albeit allegedly cutting off some of their services, which included the loss of power that enabled the army carry out its heinous acts, and the granular video quality of the night—till past 8pm, at least—in question. With all of the inconsistent statements by the Nigerian army and the LCC, it’s worth nothing that aggrieved Nigerians and other concerned persons have been CONSISTENT with what really happened on October 20, 2020 at the Lekki tollgate: The Nigerian army attacked unarmed civilians for peacefully protesting.

Last week, CNN published an investigative report, confirming and bringing a new light to the massacre. Comprising written and visual components, CNN’s report thoroughly detailed their findings, from ballistic tracing of bullets used to documenting the stories of victims and families still in search of their loved ones. While the Nigerian army has chosen to publicly ignore this report, as part of its “fake news” campaign, the federal government, through the minister of information Lai Mohammed, immediately railed against CNN, likening it to “a poor piece of journalistic work” and threatening to sanction the news network for reporting unfairly and inaccurately. Just yesterday, November 23, the Nigerian government formally wrote to CNN, demanding that the news outlet re-examine its report. In the letter signed by Mr Mohammed, the government says “it reserves the right to take action within its laws to prevent CNN from aggravating the #EndSARS crisis.”

Regardless of these annoying but unsurprising reactions by the Nigerian army and government, CNN’s report was the latest in a series of reports confirming the reality of the Lekki tollgate massacre, and perhaps, it’s this constant truth-telling that will help in putting pressure on perpetrators and accomplices to take full accountability of their roles in the deaths, injuries and alleged persecution of unarmed civilians. Taking place about five days after CNN’s investigative report rekindled public anger, Saturday’s panel sitting also included testimony from the Nigerian army, during which, for the very first time, it admitted to carrying live bullets to the protest ground.

16:00 Fusika: What did your soldiers carry to LTC?

F: Did some of your soldiers carry live rounds.

GT: The firing team only had blanks. Some had live rounds to protect the team.

Represented by Brigadier General Ahmed Ibrahim Taiwo, commander of 81 division (unit of the army where the soldiers were deployed from), the Nigerian army testified in front of the panel for the second time, under cross-examination from Mr. Olumide Fusika (SAN) and Mr. Adesina Ogunlana, both counsels for #EndSARS protesters. In nearly three hours of questioning, Brig. Gen. Taiwo dropped the bombshell that the soldiers had been supplied with both live and blank bullets, but remained adamant that live bullets had not been used on peaceful protesters.

He, however, noted that the soldiers engaged with hoodlums who had infiltrated the protesters and pelted the soldiers with stones. Interestingly, the footage doesn’t show soldiers being attacked, rather it was unarmed civilians fleeing at the army’s presence, with some even jumping into the lagoon nearby—as also cited by Premium Time’s investigative report. Gen. Taiwo also confirmed the presence of the police, further confirming eyewitness reports that men of the Nigerian police came to terrorise those left at the tollgate after the soldiers had vacated.

Fusika is not backing down on this one, according to him there is no part in the footage that shows the army being attacked by protestors. #ENDSARS pic.twitter.com/FF62V4tDqf

All of this only juxtaposes the consistency of truth and the inconsistencies that run rampant when a lie begins to unravel. Unlike the army, the lot of us know, saw and have accepted the truth and we simply want to ensure accountability and justice for the lives lost, those injured, and others being persecuted. The Lagos state judicial panel has been saddled with asking all the right questions to ensure details of the Lekki massacre of October 20, 2020 isn’t muddled or swept under the rug by “powers beyond our control”, it’s why concerned Nigerians have refused to blink throughout this process, even if the track record isn’t at all encouraging.

The Lagos state judicial panel resumes Tuesday, November 24, 2020, to continue resolving police brutality complaints from citizens in the state. The panel is expected to continue public sitting on the Lekki massacre on Friday, November 27, 2020, with scheduled testimony from the Manging Director of the LCC. We’ll definitely be keeping our eyes peeled and our ears open for that.

[Nationwide panels are also sitting, and you can keep track of all the happenings right here.]

ICYMI: HERE’S WHAT WE KNOW ABOUT THE #ENDSARS JUDICIAL PANELS

Next Article Turntable Top 50: Davido’s ‘A Better Time’ leads the charge this week