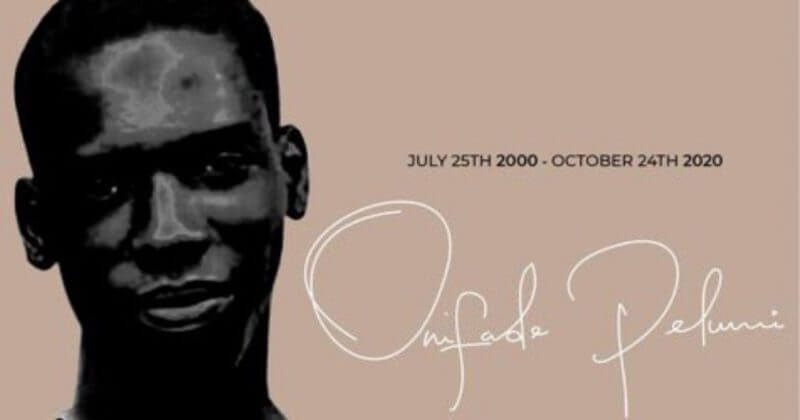 Lagos-based journalist, Pelumi Onifade was killed while in police custody

The month of October may finally be over, but the battle for better governance from our leaders and accountability from our armed forces is still ongoing. This week, we’ve learnt about the atrocious attacks taking place in Oyigbo, Rivers State, and the chilling news of yet-to-be concluded judicial panels taking place in several states and it seems that victory is far from being declared. Young Nigerians are still dying en mass for demanding better from their country and we are all collectively tired of the disturbing daily news cycle.

Today, another young Nigerian has been attacked and killed while detained in police custody. It was reported today by his family that 20-year-old journalist Pelumi Onifade was killed while working with Gboa TV as a journalist covering the unrest that took place in the Oko Oba area of Agege on October 24. He was whisked away when members of a task force led by Yinka Egbeyemi descended on the scene and attacked and detained several people at the site.

Pelumi was my kid bro. He was so harmless. The Police shattered his dreams of graduating with a first class. They throw the family into sorrow. Now they’re refusing to even release his corpse.
How heartless can these people go 😭💔 #JusticeforPelumi pic.twitter.com/qR9N2bBHbC

According to a Twitter thread containing details of what led up to Pelumi’s death, here is an account of what happened:

“On October 24th, there was a crowd in a compound at Oko-oba, Agege. Onifade Pelumi and his colleague were sent as media personnel to know what exactly was going on in that area. Pelumi conducted interviews with residents of the area. During the interview Taskforce Officers came with cutlasses, throwing bottles and shooting live bullets as they attack the crowd. Out of fear, the crowd including Onifade Pelumi ran for their lives. In a short while, his colleague saw that Pelumi Onifade had already been injured and was being carried by 4 Taskforce Officers into their Van(Black Maria). His colleague tried to defend him by showing his ID Card and making them understand that he was putting on a GBOAH TV jacket, they threatened him with a cutlass and cocked their Gun at him.

A thorough search was conducted from Police Stations to Prisons all over Lagos state for 4days (Saturday 24th to Tuesday 27th) after which a ‘Missing Person’ Graphics was shared across all social media platforms to aid the search of Onifade Pelumi which went viral. That same evening of Tuesday 27th of October, the head of Taskforce Lagos State called, saying he saw the post, and they agreed to meet on Wednesday the 28th of October at the State Headquarters, Ikeja. After the meeting with the task force, the officer that led the squad said that they arrested 5 people at the Ministry of Agriculture Abattoir, Oko-Oba, Agege, but 1 person died and they have dumped his corpse at Ikorodu Mortuary. They scheduled a meeting for Thursday to confirm if his name was on the list of those arrested. If not they will go to the mortuary at Ikorodu to confirm. Due to the public holiday on Thursday the appointment was rescheduled for Friday. On Friday Morning they got to Ikorodu and behold it was Pelumi Onifade’s Corpse”.

The family of Pelumi Onifade are now calling for justice for their late son and requesting that his corpse be released to them after they had been denied the request, according to reports by the family on Sahara Reporters. We must remember to speak up and account for all Nigerian lives. His death is a reminder that the battle isn’t over till the lives of the average Nigerian citizen matters to our leaders and those charged to protect us. May he Rest in Peace. Follow #JusticeForPelumi here.

ICYMI: Here’s how to help the family of late tech designer, Oke Obi-Enadhuze