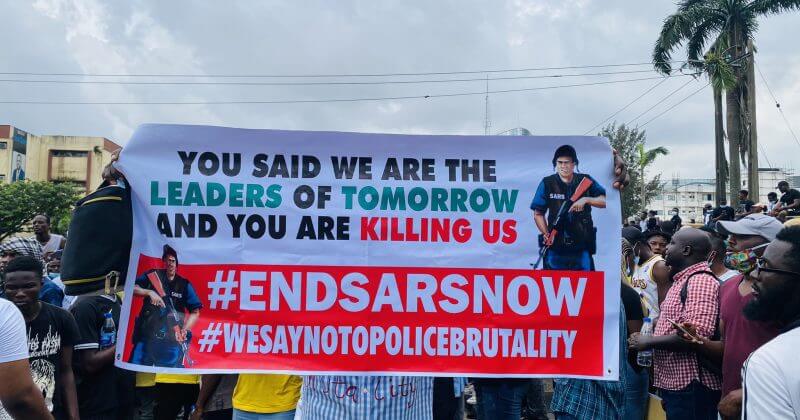 The Nigerian police respond to #EndSARS protests with brutality

Over the weekend—and even at the moment—protests calling for an outright abolition of the Special Anti-robbery Squad (SARS) have taken over major cities in Nigeria. The tenacity and wide breadth of these protests is testament to the brutality and human abuse the infamous police unit has allegedly inflicted on young Nigerian, who are determined to ensure that not only their voices are heard, but their demands are met.

A week after putting out a statement banning SARS operatives from harassing and infringing on the privacy of citizens, the Inspector General of Police, Mohammed Adamu, released yet another statement, this time “dissolving” the police unit, announcing that all officers in the unit would be redeployed to other units. Immediately after the statement was shared through the Nigeria Police Force’s Twitter account, Nigeria’s youth responded with loud cynicism, noting that similar declarations had been made in the past, to no lasting effect.

To make the response even bolder, we came up with a list of exact demands, which includes a direct address from the president, acknowledging the menace of SARS and confirming that concrete steps are being taken, the release of all protesters being held in custody, justice for the families of SARS victims, and more. The unity of these demands is based on a shared interest, and it’s been galvanised by the connecting power of social media, which has ensured that youths across the country, in the diaspora and other concerned people can move in solidarity.

With social media, we have also been able to get real-time reports from protests in the country and all over the world. Sadly, some of these protests have been marred by police brutality, ranging from harassment to physical assault and death. On Saturday, videos of the police allegedly shooting at #EndSARS protesters in Ogbomoso, Oyo state, surfaced online, with one protester reportedly killed. Shortly after, the Oyo state Commissioner of police, Mr Nwachukwu Enwonu, put out a statement saying the police did not shoot at protesters.

Later that day, though, Oyo state Governor, Seyi Makinde, confirmed in a condolence message via his Twitter account that the protester, 20-year old Jimoh Isiaq, was in fact shot by the police during the peaceful protest. By the next day, reports began to come through that the police had shot at least three more people dead, while many others were critically wounded following the use of lethal forces by the Nigerian police, in conjunction with several soldiers. This reportedly happened on Sunday Afternoon, after local youths confronted the Minister of Youth and Sports development, Sunday Dare, who was at the palace of the Soun of Ogbomoso when the shooting took place, demanding that him and the local chief condemn the killing of Jimoh Isiaq.

Meanwhile, protesters in Abuja have also been subject to a show of lethal force by the Nigerian police, at peaceful protests. On Friday, several of the protesters shared videos of the police firing teargas and live bullets, without any provocations. The incident quickly garnered attention, including coverage from international news platform, CNN. Instead of the negative exposure quelling the thirst for brutality, the Nigerian police were allegedly back at it during peaceful protests on Sunday Afternoon.

According to several accounts, the police fired teargas, ammunition which quickly ran out, before turning to high-pressure pipes from which hot water was blasted unto protesters. While scampering for safety, the police allegedly chased down protesters to physically assault, with accounts of four policewomen viciously attacking an unharmed lady, and another fear-filled protester sharing a video after being hunted into a bush. Some demonstrators were arrested by police, until Davido’s arrival—which bothered a bit on solipsistic—helped them in gaining their freedom.

One of the protesters in Abuja gave the NATIVE a short, yet, detailed recap of Sunday’s events:

“We left our meeting point at 11am and started making our way towards the police headquarters. We hadn’t even gone far, when we came across a barricade of cars and men in uniforms. We decided to kneel and raise our hands to signify that we wanted to maintain peace but these guys were not having it. They started with a water hose and we continued to kneel, still assuming that things could be resolved. They then followed that with tear gas and men with canes who then chased us. I had to hide under a bridge after running for 20mins straight. After a while, we reconvened at another location to talk to Aisha Yesufu, who then joined us as we made another attempt to their office. Getting there, we knelt again but we were met with the same treatment and the addition of armed rifles, so we ran again. At about 4pm, Davido – who announced that he’d be at the protest by 10am – arrived at our meeting ground with drones and a camera crew of his own. After some shalaying, he told us to march with him again and as the clowns that we were, we did. We got there and this time, they didn’t attack us, which was cool. But before you could say Jack Robinson, Davido bounced to the disappointment of his stans who thought he was going to save them. We stayed for a while and when it was dark, we decided to leave because who knows what they’re capable of in the dark.”

As the demonstrations have continued with its momentum, the police force has seemingly not let go of its thirst for brutalising citizens at peaceful protests. This afternoon, social media has been filled with reports that the police has been allegedly shooting at protesters in Surulere, Lagos, which has led to two unconfirmed deaths. A video of a young man laying lifeless, with his hands in pockets, has been everywhere in the last hour, while others around the vicinity have shared videos with protesters fleeing, and the sounds of gunshots.

For those asking for evidence pic.twitter.com/vi1s2NfWjs

Rest in peace, Jimoh Isiaq and all the other yet-to-be-named victims of police brutality.

(This is a developing story, and we will continue to update it as we learn more.)

ICYMI: HERE ARE WAYS TO SUPPORT #ENDSARS PROTESTORS AND CALL FOR JUSTICE