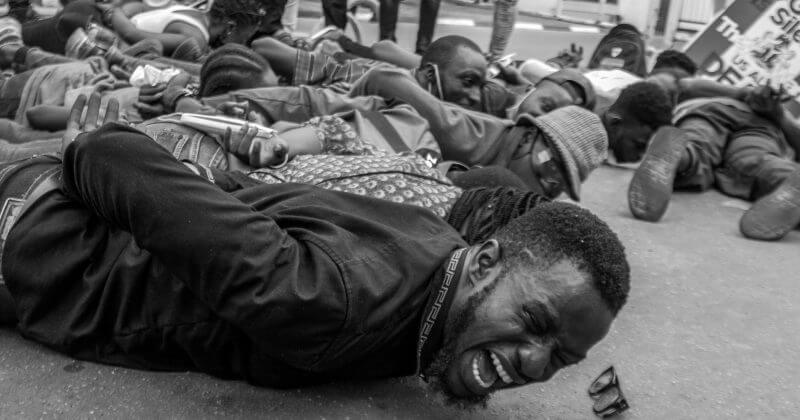 The Nation is United in Our Fight To #EndSARS

The message was clear and Nigerians are not settling for anything less than the dissolution of the Special Anti-Robbery Squad. Over the weekend, Nigerians joined together online to demand an end, once and for all, to the brutal and corrupt agency, SARS. In response to the #EndSARS trending topic, the Inspector General of the police released a statement detailing the actions of reform they he planned to take. Announcing the ban of “Routine Patrols And Other Conventional Low-Risk Duties – Stop And Search Duties, Checkpoints, Mounting Of Roadblocks, Traffic Check, Etc” and warning “The Tactical Squads Against The Invasion Of The Privacy Of Citizens Particularly Through Indiscriminate And Unauthorised Search Of Mobile Phones, Laptops And Other Smart Devices”, Nigerians are thoroughly displeased with the actions taken by the government and this has resulted in a number of protests breaking out across the country.

Nigerians are demanding that these promises of reform to no avail be replaced with a hard handed abolition of SARS, so that they may end their tyranny against Nigeria’s youth. Whilst Port Harcourt have planned a protest for October 13 and Kano State have amplified the presence of security services – the Nigerian Police Force are working in conjuction with Kano Road Traffic Agency – in order to ‘keep the peace’ and ensure protests don’t happen, in Lagos, Abuja, Kwara, Imo, Edo and other states, the Nigerian youth have taken to the streets to fight for justice. The nation has united and united we pleading

#EndSARSProtest in Lagos, Edo, Oyo, Imo and other states. The entire nation is protesting, physically and virtually. Clearly, WE are in agreement.

What more does the Nigerian government need to see that this is actually a menace and people are fed up????

In Kwara State, youth-led protests ensued yesterday, in Ilorin. Gathering outside the Kwara State Police Command, protestors remained peaceful as they chanted “No reform! End SARS!” and sung in memory of the lives taken too soon, holding signs that demand for the abolition of SARS as well as posters that highlight the discrimination young men face from SARS, one reading “I am not a Yahoo Boy Because I have a car“. Protests are ongoing and the youth of Ilorin promise that they will not end until SARS are disbanded and the indiscriminate, extrajudicial killing of Nigerian citizens comes to an end.

In Benin, protestors dressed in all black made their way through the main roads of Benin, Sapele Road, around King’s Square, even reaching the palace of the Oba of Benin. Carrying placards that read “we are not criminals, we are Nigerians”, “end SARS before they end us”, the protestors mainly comprised of youth from National Association of Edo Students, joined by other civil rights organisations and activists. Speaking to Vanguard, one of the protestors explained that young people in Nigeria are primarily the target of police brutality, saying:

“The youths of this nation no longer fear armed robbers and other criminals but rather SARS and other tactical units of Nigerian Police Force.”

Starting out as a peaceful protest, when unfortunately in their attempt to obstruct entry into the headquarters of the State Police Command, a police vehicle allegedly attempted to run the protestors over, causing injuries to many. The Edo State Police Force maintain that the issue of SARS is an issue of a few rotten eggs, as opposed to a systemic problem that needs to be dealt with at its roots, with the State’s Deputy Commissioner of Police, Kanayo Valentine promising that “the grievances of the would be addressed.” Considering the many years Nigerians have been asking for the government to end SARS, we hope that addressing these grievances means putting an end to this wholly corrupt arm of police.

The Police Commissioner of Imo State, Isaac Akinmoyede, in response to the Inspector General’s press statement, launched a monitoring and enforcement team to ban non-legislated SARS operations, such as checkpoints, stop and searches etc, in the state, a few days ago. Regardless, in solidarity with the rest of the country, young people in Imo state gathered to continue to protest against the very existence of SARS maintaining that reform simply will not do. Just like all the protests around the country, the Imo State protests were intended to be peaceful, however with police presence came the threat of violence to Imo State citizens.

One Officer Obioma Obi, in attempting to disperse the crowd was engaged in a heated argument and cocked his gun threatening the protestor to whom he was speaking. In response the protestors shouted for him to “shoot us”, before they were eventually hit with teargas. Police Commissioner, Akinmoyede has now indicted Officer Obi and condemned his actions, though he also denies that such mindless threat to life is not standard practice for police.

Last weekend, it was reported that Nigeria’s Special Anti-Robbery Squad had killed a young boy outside a hotel in Ughelli, Delta state. This was the incident that ignited this current civil unrest, that is protesting the persisting existence of SARS. Unfortunately, as Delta state held their own protests this week, more people were needlessly killed, a police officer and a civilian.

Starting out as a peaceful protests, with reports saying that the protesters even bypassed the police station to avoid a clash, the protest turned violent when a group of civilians opened fire against the police killing an officer. This resulted in more gunfire and the destruction of cars, and it has now been revealed that another man was killed, and a young boy was also shot in the leg, as a result of the the violence that ensued during the peaceful protest.

The Delta State Commissioner of Police has condemned the killing of the officer and aims to arrest his killers swiftly, however, police officers in the state seem to be seeking revenge for themselves today, as is being reported on Twitter.

Happening right now in Ughalli Delta State, @PoliceNG are going house by house, hotel by hotel arresting any Nigerian youth they can lay there hands on.

Protestors in Abuja gathered around the Nigerian Police Force Headquarters in Abuja, demanding to speak to the Inspector General to find out what will actually be done about out plea to End SARS. Led by Omoyele Sowore of Sahara Reporters and Hajia Aisha Yesefu, who campaigned for Bring Back Our Girls, amongst others, yesterday, protestors used animal blood to illustrate the blood shed by the corrupt SARS force, writing #EndSARS on the ground with it. Protestors reconvened today also, but have been put to a violent end as police deployed live rounds and tear gas to disperse the peaceful crowds.

On Sunday evening, in response to the social media uproar, Naira Marley announced that he was organising a protest on Monday. Though the protest never held, instead Naira Marley spoke with DCP Frank Mba on behalf of the Nigerian people, later in the week, protests began and have been ongoing in the state ever since. On Wednesday morning, crowds convened at Alausa, Lagos State Secretariat, and remained there overnight refusing to leave until they were attended to by Governor Sanwo-Olu himself.

Protestors, including Nigerian comedian Mr Macaroni, have been camped outside the government house for two nights now. As well as their tents being seized by policemen, canopy retailers were reported to have been mandated not to sell to protestors in order to deter them. Other acts of aggression include the shutting off the streetlights so that their campsites were turned pitch black and, more violently, deploying armed squads to intimidate protestors who are maintaining peace.

With the presence of armed police, comes violence, which, unfortunately, in Lagos State, resulted in the shooting of a women in Opebi, Ikeja. The lady has now been identified as Joy Eze, and is being attended to at the Lagos State University Teaching Hospital in Ikeja.

On the Island, many celebrities joined Runtown and Falz who endorsed a protest that began at the Lekki Expressway toll gate. When Nigerians gathered there in the morning, it was reported that police violently dispersed the crowds, however, the protest reconvened at the arrival of Falz and Runtown. Joining these musicians were other public figures such as Tiwa Savage, WurlD, Paul Okoye, Toke Makinwa, Dija, Blaqbonez and more. Naira Marley, though he was not reported to have attended, commended the protestors and encouraged his fans to join in, promising that “after a week, if there are no changes on this FSARS issue as promised by Nigeria Police Force, then we will get back out there stronger.” Small Doctor has also asked for Lagosians to join him in Agege for a peaceful protest today.

Watch the emergency session held at the Lagos State Assembly this morning, recorded by Feyikemi Abudu

ICYMI: HERE ARE WAYS TO SUPPORT #ENDSARS PROTESTORS AND CALL FOR JUSTICE

Next Article A 1-Listen Review of Olamide’s ‘Carpe Diem’