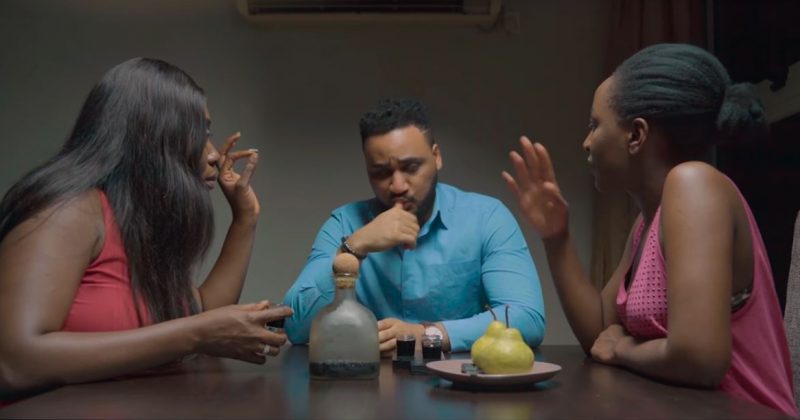 Okay, first off I’m about to kick someone’s ass. Who the hell at OBFW is responsible for that cliff hanger ending in Episode one? Because that person is a scammer who lives for drama. Had us all totally scammed.

In hindsight, I should have known there was no chance in hell that Charles, the web show’s protagonist would get run over by a car at the end of the first episode, especially when the episodes are like 15 minutes long maximum. But I was kind of expecting it to be some kind of plot device to justify just how much time it would take the show’s main characters to settle into themselves. Congratulations y’all, you deserve to join Donald Trump’s cabinet.

If you haven’t seen episode two, do it here, and if you don’t, continue at your own peril.

Episode two starts off where it left off, with hunka-hunk Charles in ‘exercise’ gear. He gets run over (my chest) and wakes up in bed, revealing to us, the scammed, that it was just a nightmare. Pretty ordinary scene, except that bros Charles is wearing an expensive leather watch when he gets out of bed. Who wears an expensive leather watch to sleep. Continuity people at OBFW, WYD?

After the fantastic opening montage (someone please find me who sang that song) we see Charles at work, Mac at hand, looking as crim-crim as he does in spandex. Jade hits him up to remind him that they still have to meet and discuss his list of potential wives and after he gets a skype call from a work colleague, informing him that his boss is looking for him. When he does track the boss down, turns out his boss is a total tool who without barely looking at him, informs him another colleague’s been fired and Charles is taking over the accounts he oversees. As a colossal asshole, he informs Charles he has a briefing in an hour and insinuates he’s going to get sanctioned if he doesn’t close the contract. Worst part, the thing Mr Boss is so busy doing that he can’t even bother to look Charles in the face is virtual Chess.

Me drinking so I don’t have to reach into my television and kick someone’s ass.

Charles is sha a big boy so he better be able to handle himself.

Jade on the other hand needs a lot of help. She calls Kemi to complain that Tunde, the mythical guy from Episode one who Kemi was trying to hook her up with somehow got her number and called her. Kemi’s already had it up to her with Jade’s forming and disregards her completely. Her complaint done, Jade turns to the real reason she called. She needs a favour from Kemi’s husband; discounted tickets from his airline. Turns out Kemi hasn’t heard from her bae since he last flew for his company which she chalks up to his ‘work’.

They sha get into Charles infamous list, and while Jade has a dozen names on her list, Kemi only has two; Tara and Jade *wink, wink*. Charles on the other hand is at his meeting pitch, the folks at his client like the pitch they just need the entire team to agree on things. And guess who is part of the team?

Onome from Episode One.

Yup, that one. The one who Charles slept with and kicked out of his house the morning after. He tracks her down to the staff kitchen and tries to smooth things out with her, but she isn’t having any of it AT ALL. If this is how Charles treats all the women he sleeps with, he is in big shit, because aunty Onome completely obliterates Charles’s pitch, potentially losing him the job.

After work, Charles go over to Jade’s to discuss the list. Together over shots of Courvoisier, the three of them come up with 8 names, a master list of 8 women that Charles could possibly marry. Kemi and Jade lay out the ground rules; one date per girl, no sex, no going back to each other’s houses and most importantly, no telling anyone he is looking to settle down. Sounds simple right?

This gon be good.

Charles goes on his first date with Tara, of whom the episode is named. Tara definitely earns the problematic ‘thirsty’ title because homegirl is more turned on than a Jamaican dagger party. Every single word that comes out of her mouth is unabashed flirtation and they’ve barely spent a minute on the date before she’s already whispering into Charles’s ear and pushing her boobs in his face. He breaks rule number one almost immediately and breaks number two when she suggests she wants to fuck him. She grabs his face and stuff her tongue into mouth before he can drop to his knees and propose and then they’re knacking like there’s no tomorrow.

Thirsty Tara waits till uncle Charles has passed out from post-coital knacks before she packs her load and slips out. Not before she makes a detour to his living room and drops him a special present.

An invitation to her wedding.

By the way, I’ve always wanted to see Tay Iwar’s Fores (only the most decadent song ever) used properly as a soundtrack. Fucking decadent. Thank you OBFW.

Listen to it here.

Next Article Interview: Nonso Amadi talks his influences, his muse and what brings him the most joy