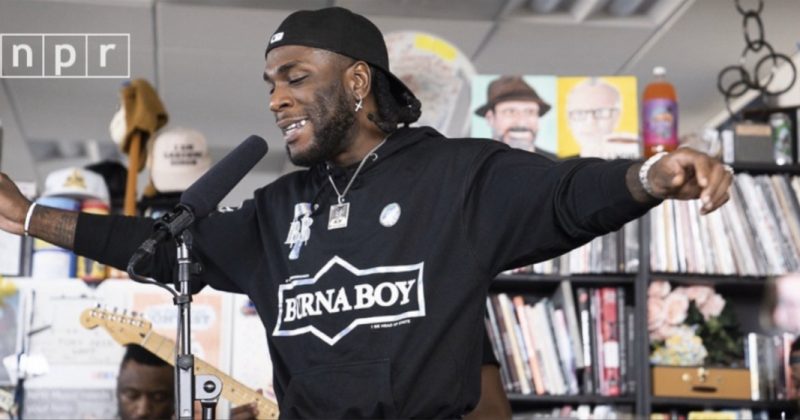 Burna Boy is having his moment, and his fifteen minutes have served him well all year. From his energetic performance at Coachella this year, his Billboard certified album, ‘African Giant’ to his first global tour which he’s currently on the European arm for, he hasn’t let up and he doesn’t seem to be any time soon.

Now the African Giant made an appearance on the iconic NPR Music Tiny Desk Stage, smoothly sifting through 4 tracks from his latest album. His entire run this year has solidified his self-acclaimed status as African Giant, and everything we predicted about him in our very first issue is coming true.

Tiny Desk has seen many of this year’s breakout stars from the likes of Lizzo, Summer Walker, Dave and many more, and he’s in good company. Burna Boy’s set starts off with a slowed down version of “Gbona” before delving into two of his more politically charged singles “Wetin Man Go Do” and “Dangote.  He rounds up his performance by amping things up a notch as he delivers his magum opus, “Ye”. Burna Boy strips back these songs from their original energetic beat, while he offers a reflective explanation for them over a piano-led beat  with synth-infused pop melodies.