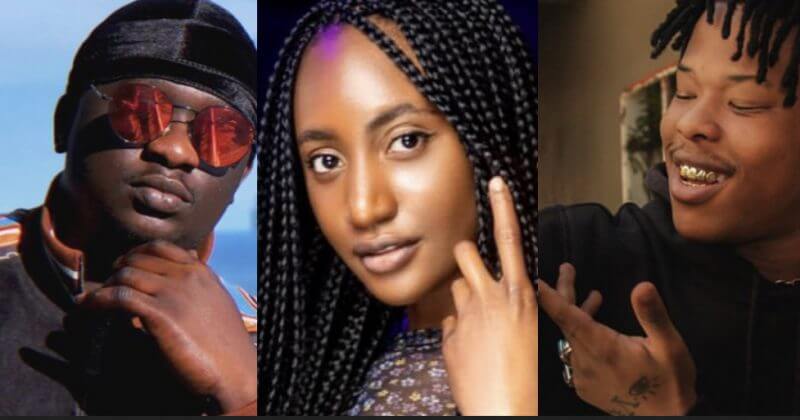 We’ve had music through all the heartbreaking moments of 2020. Despite the ongoing pandemic, civil unrest, and the seemingly endless-barge of news about untimely deaths, musicians have continued to capture our collective pop consciousness with new songs that either reflects our present reality or provide an escape from it. We know it can be difficult to keep up with all the diverse streams of music so we’ve created this column to keep you, our readers, up to date with all the finest tunes coming out of Africa and the rest of the world. These are the songs you absolutely need to hear.

While our midweek curation for Songs of the day featured the new releases from Olamide, Teni, Eugy, Sean Tizzle, Jamopyper and Mayorkun and more. Today, we’re bringing you all the latest music releases to get you in the right mood for the weekend. Joyce Olong, Bella Alubo, Nasty C, Lil Gotit and Lil Keed, Wande Coal, Mr Eazi, Major Lazer, Nicki Minaj, and K4mo, Veen, Moelogo, Mike World, Jinmi Abdul, Joeboy, and Oxlade have all put out new music and you can enjoy them below. You’re welcome.

After exploring different themes of womanhood for her debut project, ‘Merci Beaute’ Joyce Olong emerged as an introspective singer/songwriter, crafting a unique brand of confessional songwriting. Though we’ve had to wait three years for her to release new music, she’s been called upon to contribute guest verses on thought-provoking songs like Yinka Bernie’s “It’s Okay To Cry”. Her new single, “Outta Town” finds her spinning a narrative of facing criticism as an outsider; “They don’t even know you/ But your life story they narrate.”

The swelling string harmonies and the laidback drum riffs she produced for “Outta Town” sets a relaxing backdrop for her soothing vocals as she assures listeners who feel alienated that they aren’t alone. Though the feeling of not belonging can be sad, Joyce Olong’s confidence as she interpolates 50 Cent’s “Many Men” encourages listeners to find the resolve to rise above it.

Wande Coal is the definition of an evergreen artist. The man has consistently delivered stunning dancefloor-fillers since 2007’s “Ololufe” first introduced him as Mo’hit’s sweet-talking R&B singer. He just released his 3rd project, ‘Realms’, a 7-track EP that gleams with his stylish variations of dance-pop. Although pre-released singles, “Again”, “Naughty Girl” and Sarz-assisted “Vex” already enjoyed the fanfare that comes with every Wande Coal release, the 3rd track, “Check” seems to be the new crowd-pleaser to celebrate the tape’s release.

The tropical island vibe of the instrumentals Lekka Beats and ScrewFace produced for “Check” forms a lightweight backdrop for Wande Coal to question his muse’s intentions; “Everyone says you’re the one for me/ Tell me now baby what you want from me”. Wande Coal’s catchy melodies allow him to shimmer with swagger as he describes his uncertain relationship with his muse while riding the groovy instrumentals right into our ears and hearts. This is the music that dancefloors were made for.

Despite the international fanfare for Afropop and other indigenous sounds, Nasty C did not hesitate to deliver the boastful hip-hop sensibilities he’s renowned for on his latest album, ‘Zulu Man with Some Power’. The tape which was released under major  Def Jam Recordings boasts features from American rappers, Lil Gotit and Lil Keed for one of the standout tracks, “Bookoo Bucks”. He’s just followed up the release with an accompanying video aimed at highlighting continued efforts to bridge the African and black American cultures through hip-hop.

All three rappers perform their verses, offering profane boasts about his glamorous lifestyles and we see them living it up in the video Nasty C co-directed with Allison Swank. The video shows Nasty C partying with friends and models at a mansion in South Africa before we see Lil Gotit and Lil Keed partying with models in Atlanta.

The last time we heard from Bella Alubo, she was complaining about being the “Loneliest Girl in the World”. At the time of its release, many of us related to the words she sang seeing as we were all self-isolating and helping efforts to curtail the spread of the coronavirus. Fortunately, we’ve learned how to cope with the new normal as people are now finding the courage to venture back into the world as cities begin reopening. As a result, Bella Alubo’s newly released single, “Gbolahan” is rife with this feel-good energy, buoyed by the laidback afropop production and her easygoing charm as she narrates a romantic encounter.

“Dark shades on, no you can’t see me/ I’m finer than the last time you saw me/ Say my days are nicer now”, she begins, placing herself in a long lineage of tales of overcoming misery. She keeps up the dramatic and intently personal narration of her experience with love as she sings about her muse who only wants to show her off as a trophy. “Afterparty, afterparty/ Say my body is like a Bentley/ Trying to love me like a gangsta/ You want me in your ride/ Want us to leave here together” she cries, leaving the details of her story tantalizingly out of view.

Major Lazer’s mission to unite all the dancefloors around the world makes them suited for borderless collaborations. As a result, Mr Eazi enlisted the electronic dance music group for his latest release, “Oh My Gawd”, the first single from his upcoming tape, ‘Something Else’. The song also features Nigerian singer, K4mo and American rapper, Nicki Minaj who join Mr Eazi in confessing their appreciation for women’s backside.

The song interpolates Dr Alban’s classic, “Carolina” as they ask, “Guess who’s coming to dinner” over the dancehall and EDM beat produced by Fred Again and Diplo. In a statement released when the song was shared, Mr Eazi explained that the song was as fun to make it sounds. “It’s crazy how it went from hearing a K4mo intro in the studio with Fred Again, to me jumping on it and then Diplo hopping in! And Walshy hitting me up to say it’s a banger—next thing Nicki is on it! Been a journey really, like two years in the making and I can’t wait to perform it at my next festival!” But while we have to wait for festivals to return, we can enjoy the choreographed dance video for “Oh My Gawd” as we prepare for the clubs to get opened.

We’ll never get tired of the way Veen’s voice harmonizes atop his guitar-led trap production. His ability to produce his own songs allows him to bridge trap and afropop sensibilities together seamlessly in the same vein as artists like Odunsi The Engine. Earlier this year, he released a joint tape with Kiienka, ‘Star’, exploring the dance-driven sound of afropop but on “Crib”, one of the standout tracks from his newly released project, ‘Impact’, he turns to R&B-infused trap to deliver his apologetic message to his love interest; “I said I’m sorry/ Baby don’t leave”.

“Crib” subverts trap music’s reputation for being braggadocious, delivering a romantic number that’s sure to resonate with the lovers among us. “I don’t want problems, I want a kiss”, he sings with a politeness that’s unconventional from a rapper but delivered with a romantic open-heartedness that feels real. Though his laidback melodies retain his cool demeanor, the mellow guitar-led beat he produced pulls at listeners heart-strings as he pleads for forgiveness from his muse. With the guitar melancholic guitar solo he throws in at the end of the song, “Crib” highlights Veen’s confidence to push the boundaries of sonic experimentation as he continues to explore different sounds.

Because there is no shortage of upbeat dancefloor fillers in Nigeria’s music scene, artists who can tap into their somber emotions for their songs are rare finds. Mike World’s new single, “Focus” puts him among the few emotive Nigerian songwriters as he delivers an emo-trap performance, expressing his unrequited feelings for his muse; “You know I care for you/ Do you not comprehend baby”. Though the catchy trap-inspired beat Baka and $hadow produced for “Focus” has an upbeat vibe, Mike World’s singing through auto-tuned filters quivers with emotion. “It’s sure enough that I adore you/ Now you’re acting like I don’t even know you”, he sang, couching his frustration with an appealingly fluid melody that earns the song endless replay value.

Jinmi Abduls’s romantic brand of Afropop places him within the conversation of the new generation of afropop singers taking the dance-driven genre to its emotive heights. For his latest single, “JOWO”, he teams up with Oxlade and Joeboy, two artists who are also reputed for mining their relationship woes to make relatable songs to serve dancefloors.

SBling produced the lightweight mix of catchy drum riffs, synths, guitar, and percussion harmonies that set a groovy backdrop for Jinmi Abdul, Joeboy, and Oxlade’s sweetly melodic vocals. Jinmi Abdul leads the charge, opening the song with wistful lyrics lamenting his failed relationship with his ex; “Promise me sey you go return/ because my last woman, she leave and run”. Joeboy and Oxlade offer their contribution with verses echoing Jinmi Abdul’s fear of getting their hearts broken again. Though love can be the most pleasant emotion, Jinmi Abdul’s “JOWO” reminds us that it can go sour very quickly if we aren’t careful.

King Lekan – “Give You All” featuring Moelogo

NY-based Nigerian producer and musician King Lekan is gearing up for the release of his debut EP ‘No Time’ next month and we’re eagerly awaiting its release owing to its impressive feature list which boasts of collaborations with Bemi Soul, Mojeed, the.wav, and more. In the meantime, he’s just shared the project’s first promotional single, “Give You All”, a groovy afropop number featuring Moelogo. Over the catchy afropop drums and soothing airy keys, Moelogo delivers a captivating afro-r&b set as he sings about his devotion to his lover who he promises to shower with all his love and affection.

Next Article A 1-Listen review of Wande Coal’s ‘Realms’