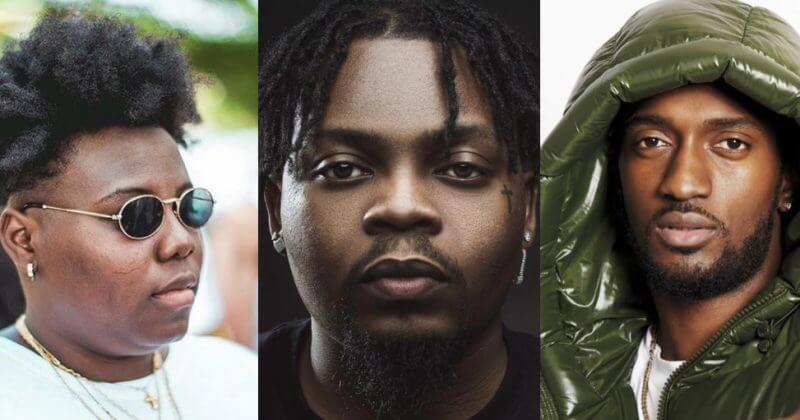 We’ve had music through all the heartbreaking events of 2020. Despite the ongoing pandemic, civil unrest, and the seemingly endless-barge of news about untimely deaths, musicians have continued to capture our collective pop consciousness with new songs that either reflects our present reality or provide an escape from it. We know it can be difficult to keep up with all diverse streams of music so we’ve created this column to keep you, our readers, up to date with all the finest tunes coming out of Africa and the rest of the world. These are the songs you absolutely need to hear.

We started this week’s curation of Songs of the day by covering the latest releases from Kwesi Arthur, Ice Prince and Tekno, A.BEEB, DJ Tunez and J Anthoni, $odaman and more. Today, the mid-week edition features the new releases from Olamide, Teni, Eugy, Sean Tizzle, DJ 4kerty and Dammy Krane, Jamopyper and Mayorkun and more. These are all the latest releases you don’t want to miss out on and you can enjoy them below. You’re welcome.

Olamide already proved he’s a versatile artist when he made the switch from making rap songs to making club-ready street anthems. He pulled both of his artistic expressions together for his last album, ‘999’, where he rapped about his clubbing lifestyle on tracks like “Mojo” and reflected rap’s ill-mannered attitude towards women on the street anthem, “Wonma!”. He just released his first single since EP, “Eru”, and here, he abandons rap to deliver melodic singing about his love for his partying and his muse.

Singing “Ko le re mi rara(I can’t get tired)/Eyin ma nowo tan(You’d spend all your money)/ Awa olowo nile oh(We have money at home)” over the dance-driven beat produced by P.Prime, “Eru” is dedicated to partying to the max. We expect to hear the song serving dancefloors as soon as clubs get back in business, but in the meantime, we can enjoy the party-themed video Clarence Peters directed for the song.

Teni’s impressive music career makes her one of the most prominent voices in the country. Her relevance in the largely male-dominated music industry positions her as a cultural icon for women and on her latest single, “Wanneka Women Anthem”, she embodies her role as an inspirational figure to deliver a tribute to all women. P.Prime produced the bouncy Afropop beat for Teni’s love message to women as she sings “Baby you’re so smart and beautiful/ Everything on fleek and you’re so unique”, over mix of percussion harmonies and catchy drums.

With dance instructing lyrics—“Oya show them, give them/ Oya baby pepper them”—“Wanneka Women Anthem” is another dance-driven performance from Teni after her ‘The Quarantine Playlist’ project with DJ Neptune.

Jamopyper – “If No Be You” Feat. Mayorkun

People fall in love all the time, and musicians keep finding compelling new ways to express their hearty feelings. Paired with catchy Afropop harmonies, Jamopyper and Mayorkun’s candid depiction of how they charm their love interests is stunning. The two singers take turns confessing their feelings for their muses as their bright melodies ride the groovy instrumentals.

Though the beat produced by Mansa Jabulani was designed to serve dancefloors, Jamopypa and Mayorkun infused their goofy personality with lyrics that make the song a pleasant listen anywhere. The video directed by NayaEffectz Visuals captures both artists as they perform the song in different sets and we see Zlatan cameo in one of the sets.

In the video for Sean Tizzle’s latest single, “Oreke”, the singer gets into a highspeed car chase with someone trying to kill him. The song itself is a romantic ballad written to show the extent of Sean Tizzle’s romantic feelings for his muse as he sings over lightweight Afropop harmonies designed to serve dancefloors. While we hear him serenade his muse with sweet words like “Baby, lately I’ve been acting crazy about you”, the video reveals just how dangerous his attraction as we watch Sean Tizzle get into a fight at the club to protect his lover’s honor.

With Sean Tizzle’s heart-on-sleeves performance, “Oreke” is serviceable as a pop song for the dancefloor. However, the CGI video adds an edginess to the song as the scenes move from a party date to a street race that ends in what looks like a fatal crash.

Eugy has remained a consistent feature in Afropop conversations since he broke out in 2016 with Mr Eazi assisted single, “Dance For Me”. For his latest offering, the UK-Ghanaian artist/rapper has released a 4-track tape, ‘4 Play’, exploring the sexual tension that builds between people as they grow intimate with someone new. Though all of the tracks convey his romantic feelings and intentions, the title track, “4 Play”, finds Eugy describing all the things he loves about his relationship with his muse; “Always on worst behavior/ Backtrack and you stay down”.

In the video for “4 Play”, we watch Eugy spending his day on a romantic date with a woman he met at a store. Though the laidback r&b-influenced song plays in the background while we see them taking walks, buying flowers, and eating at a restaurant, the lyrics don’t seem to reflect the actions in the video. The closing shot of Eugy in bed with a different woman hints at the bigger picture which unveils through the rest of the cohesive project.