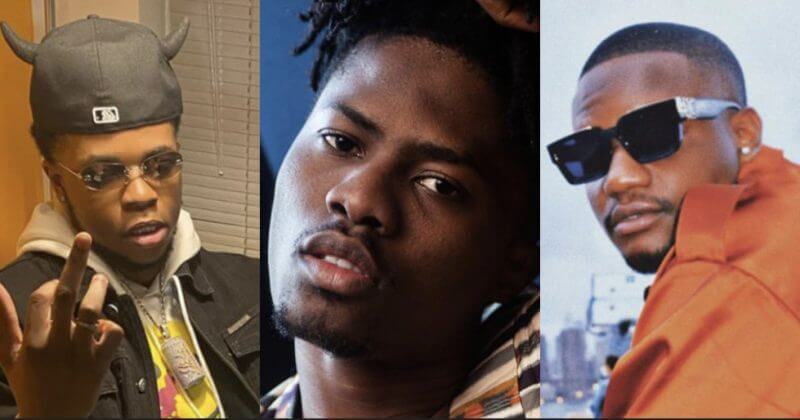 Our last Songs of the day curation featured the new releases from Ghanaian sensation, J Derobie, Del B, Wizkid, Flavour, Walshy Fire, and Kes, Oxlade, Bella Shmurda, Moshoodat and Olayinka Ehi, MOJO, and D-O. To start the new week, we’re featuring all the latest music releases from you don’t want to miss out on. We have songs from Kwesi Arthur, Ice Prince and Tekno, A.BEEB, DJ Tunez and J Anthoni, $odaman and more. You can enjoy them below.

Kwesi Arthur has a flair for singing and rapping. He showed off his adeptness at both on his 2019 project, ‘Live From Nkrumah Krom, Vol. II’, where his sonic range allowed him to explore lightweight romantic themes and also deliver politically-charged raps. The tape’s success built fans’ anticipation for Kwesi’s follow-up project, and he has now shared a 3-track EP, ‘This is not the tape/ Sorry for the wait II’, to appease fans while we wait for the full-length project.

The tape contains previously released single, “Turn on the Lights”, Sarkodie-assisted “Jehovah” and “Live From 233”. Kwesi Arthur also shared a video for “Live From 233”, conveying the song’s motive as we see Kwesi Arthur out on a street in Ghana while he raps about how much he has accomplished despite his humble beginnings. Saying “Three years ago, food was a challenge/ Now I get Ethiopian girls trying to show me the promised land cause they know who the sun is” over the grime beat produced by Juiczx, “Live From 233” is an inspiring record that anyone who has been through struggle can relate to.

After navigating his career as a rapper turned pop star, Ice Prince understands better than most how to soften his candid rap music with a lovesick narrative. For his latest single, “Make Up Your Mind”, he teams up with Tekno to examine loyalty (and the lack of it) in their relationships. Celebrities tend to have trust issues in their relationships and over the catchy beat produced by Stunna, both artists take turns lamenting the uncertainty they feel.

Saying “Just last week, my guy dey form billionaire/ When police came, I swear his friends disappear”, Ice Prince expands the narrative to include none romantic relationships as he narrates different scenarios with questionable loyalty. Tekno’s harmonizing pairs nicely with Ice Prince’s raps, and his verse, questioning what his muse wants from him builds to the song’s conclusion: “Make up your mind/ If you too dey fight, omo break up on time”. It’s clear from the song that they’ve both had it with fake friends.

With the global appeal for Afropop growing more undeniable by the day, African in the diaspora are proudly embracing their culture with their new music releases. Atlanta-based, Gambian singer, Yanó Rude just released his new single, “Kalash Passion”, an almost 3-minute long piece of feathery, melodramatic dancehall ballad. Layering the song with synths, highlife guitar riffs, percussion harmonies and Afropop drums, “Kalash Passion” is primed for sweaty dancefloors. Though Yanó Rude’s lyrics waver between serenades for his muse and the anxious thoughts that haunt him—from “You’re the queen of the dancehall” to “Bad energy stay away from me/ I’d rather just make money”—the dancehall production gives “Kalash Passion” its form as the groovy melodies take the edge off Yanó’s depiction of his hustler lifestyle.

In 2018, Skiibii‘s career grew from publicity stunt acclaim to nationwide cool after his song, “Sensima” featuring Reekado Banks dominated DJ sets and radio airwaves. He has since continued to enjoy mainstream success with his follow up releases like “Daz How Star Do” featuring Falz and Teni and his debut single for 2020, “Banger” featuring Reekado Banks. The two reunited to woo their love interests with adoring lyrics and now they’ve updated the song with a colorful video to match.

The dancefloor-driven RhymeBamz beat takes on a summery allure in the video AJE Filmworks directed. While both artists are seen singing their lovers’ praises saying, “Baby girl your body is a banger”, we also see beautiful dark-skinned women showing off their skin. All the models glisten with sweat, glitter, and melanin as the song celebrates everything we love about the summer season.

Whether putting out cocky rap songs like Maison2500-assisted “Fleas” or crafting R&B melodies on last year’s “You & I”, Atlanta-based Nigerian artist, A.BEEB is known for writing his relationship experiences into his music. He just released a new single, “No Gree” and he resumes his romantic narration over a mid-tempo Afropop instrumental with laidback synths and stomping dancehall drum.

Singing “Odeyewu, don’t go/ I’m begging you, please/ You see I’m down on my knees”, A.BEEB isn’t scared to admit his feelings for his muse. But rather than put up a charming performance, “N0 Gree” finds A.BEEB venting his frustration at being underestimated by his muse. “I like you but you act somehow”, he sings with his subdued vocals reflecting his disappointment. “No Gree” is as close as a song can get to depicting unrequited love.

After giving us Wizkid-assisted “Cool Me Down” and star-studded “Pami”, DJ Tunez is back with a new single, “Differently”. The new song introduces the featured artist, J. Anthoni as a sweet-talking dancehall singer with his seductive vocals riding the whine-ready beat produced by Akonedo Jeffrey. The mix of breezy synth harmonies and Caribbean dancehall drums create a smooth backdrop for his romantically-inclined performance addressed at a muse who “says she wan put the pussy pon (him)”. Though the instrumentals’ groovy harmonies set the song on the dancefloor, J. Anthoni’s vivid lyrics focus on his relationship with his muse while his melodies capture the thrill of Caribbean dancehall.

Atlanta-based rapper, $odaman has followed up his debut album, ‘$oda City’ with a new single titled “CNN”. The new single celebrates $odaman’s growing acclaim following the success of his project and he continues to deliver cocky brags that are reminiscent of the rude mogul-in-waiting bars that propelled him to where he is now. He carries the momentum forward on “CNN” saying, “Got these niggas watching me like I’m CNN” over the mid-tempo trap beat produced by JKJ.

Although it’s a bit on the nose, the video for “CNN” captures $odaman’s playful buoyance as he dresses up in different humorous costumes of TV presenters. The comical video is sure to extend his hot streak even further.

ICYMI: Catch up on all the new music released last week

0000
Previous Article Best New Music: Kwesi Arthur shows off his profundity on ‘This is not the Tape, Sorry 4 the Wait II’