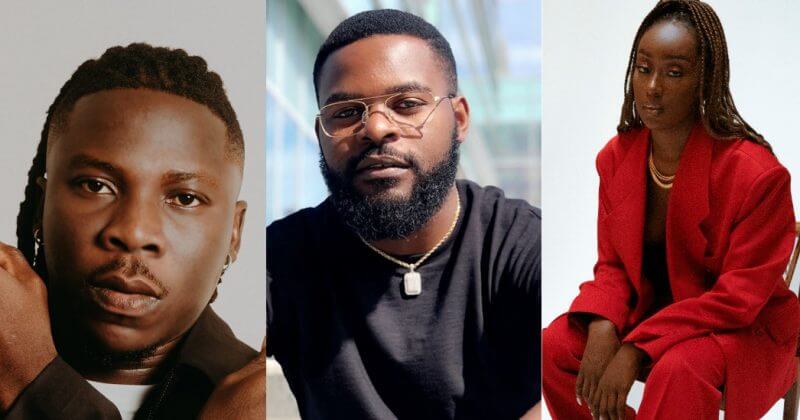 Songs of the Day: new music from Stonebwoy, Falz, Tomi Agape and more

The last few months have been difficult. But with three weeks left until the end of the year, we’re trying to find more ways to be thankful and present in the current moment. While we’re still dedicated to amplifying and reporting the issues that have plagued us this year, we’ve now resumed our column, Songs of the Day as a nod to the artists putting out great music that serve as a momentary escape from all the grimness of the current news cycle.

We ended last week’s Songs of the day curation with new releases from Davido, Odunsi, Tekno, Flavour, Mr Eazi, Buju, Ghanaian Stars, Femi Kuti, LadiPoe, and more. Today, as news of reemerging End SARS protests in Nigerian cities reaches social media, many young Nigerians may be feeling just as stuck as they were back in October. So, to help dissipate the worrying thoughts, we’re bringing you new music to get you through the day including new releases from Stonebwoy and Davido, Falz and Niniola, Tomi Agape, Amaarae and BOJ, Waje and Cracker Mallo, Lo Village, and many more. Dig in and enjoy.

When Ghana and Nigeria collaborate, it’s always to stellar results, and Stonebwoy’s latest single “Activate” is further proof of this. Produced by Mix Master Garzy, the new single sees both artists singing about the effect that their muses have on them and declaring their intentions to deepen their physical connection.

In the accompanying video for the new single, both artists can be seen having a good time by the poolside with beautiful women. Singing “Baby you activate me o/you dey captivate me” over the song’s hook, Stonebwoy states just how consuming the love connection he feels is. And with both artists exchanging and donning the other’s national football jersey, it’s clear that this is a formidable pairing.

Just in time for the end of the year, Falz is back with new single, “Squander”, featuring the Queen of Afrohouse, Niniola. The up-tempo number produced by Young Willis, sees both artists aiming to get you and moving and swinging to the spritely beat.  Niniola seems as confident and comfortable as ever, finding herself in familiar territory and floating seamlessly over the propulsive rhythm.

Dj Spinall is days away from the release of his new album titled ‘Grace’ and already he’s served up singles like the Dice Ailes-assisted “Pressure” and “Everytime” featuring Kranium to whet our appetites. Ahead of the forthcoming project, he’s just released a new single titled “Sere” which features YBNL’s Fireboy DML. Over the uptempo beat produced by Kel P and DJ Spinall, Fireboy DML delivers a catchy danceable verse that invites listeners to groove and sway with its infectious rhythm as he invites a love interest to let loose and dance with him.

Tomi Agape is back and we’re also getting an incoming project titled ‘Never Gunna Be The Same’ on the horizon. Ahead of the project’s release on December 11, Tomi Agape is letting us into her world with the release of the new romantic single “Lovers Rock” which features Amaarae and BOJ. The groovy mid-tempo number sees all three artists audaciously asking their love interest to accept their advances and not hold anything back. “You’ve been on my mind, especially at nighttime” sings Tomi Agape, declaring her love before being joined by BOJ on the ook as he sings “I just want to show you off baby, I just want to give you love baby” showing that modern-day romance is far from dead.

Waje is back with a new single just in time for the end of the year. The new single titled “Best Thing” is a romantic number produced by Cracker Mallo, which sees the singer addressing a love interest who she regards as the best thing in her life. “Shey you be my best thing/need no second-guessing/oh abeg make I hold you” she sings amorously on the song’s hook, professing all her romantic feelings with the conviction that her love interest also holds her this highly in their heart.

Lo Village – “Out The Window”

Maryland musical r&b and rap trio, Lo Village has been generating some buzz in their hometown for quite a while and with the release of their forthcoming EP ‘Lost in America’, it’s clear that the group are poising for a more global-facing domination. Their latest single “Out the Window” is a more politically charged number which sees them exploring the black American experiences in America. Singing over the chorus, Ghanaian-American vocalists Kane and Ama sing, “I’m a solider, I remain ten toes” as they speak to the power of black people who continue to stand up against racially charged injustices in America.

Since finding the confidence to release her raps this year, newcomer, DEELA has been setting off quite the storm with her string of bold, bossy raps. For her latest offering, the 18-year-old mcee taps into the sounds of Atlanta-based rapper KA$H for a confident, self-assured number titled “ROLLING STONES“. The trap-charged cut sees both artists effortlessly running through their achievements, particularly DEELA who is quick to address the pressures of being an upcoming rapper in the game.

“Rubbing any beat cause I can/For the niggas in the back who ain’t fucking with me, you niggas stay dumb” she raps on the first verse, making a very convincing case for why you should stop what you’re doing and become a DEELA fan today. Whether you like it or not, she’s coming and she’s disrespectful AF

The team over at Lucid Lemons is expanding and adding to their musical repertoire. They’ve recently released their first official single titled “Can’t Get Enough” which features UK-based Nigerian singer/songwriter Dara Blaxx. The romantic cut sees the singer confront feelings of love, infatuation and affection and speaks to the power in believing in one’s sauce despite the fervour of your love for someone else. Going forward, the Lucid Lemons team has promised more of these musical collaborations with various artists in their community. We can’t wait to see what they come up with.

Nigerian singer/songwriter Kare is preparing for the release of his debut EP set to be released next summer. Ahead of the forthcoming release, the singer is whetting our appetites with new afropop single titled “Freaky”. The upbeat new single finds Kare addressing a female muse to get down with him in the naughtiest way possible. From the song’s suggestive title, it’s clear that this new single is dedicated to the thrill of dimly lit nightclubs and parties.

ICYMI: Here are all the new releases from last Friday

0000
Previous Article Turntable top 50: Omah Lay climbs to the top of the charts

Next Article Songs of the day: New music from Davido, Odunsi, Mr Eazi and J Balvin, Flavour and more