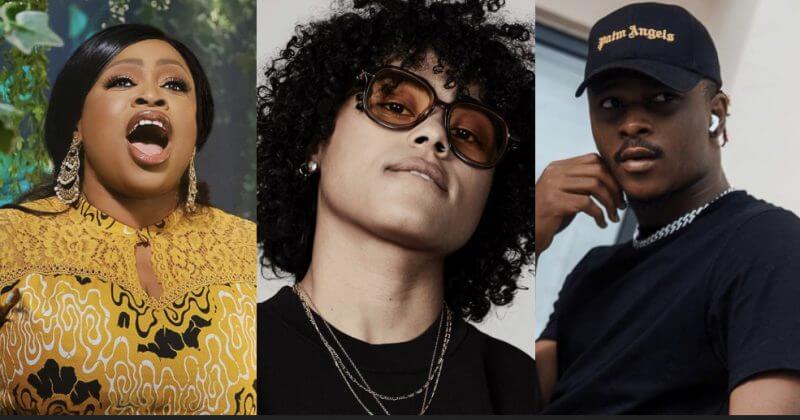 Songs of the day: New music from Sinach, Ruger, capespring, Davido and more

Last year, The NATIVE created our ‘Songs of the Day’ column as an avenue to curate some of the best and biggest songs from around the continent. In the time since its creation, the column has served as a means to discover music from niche, rising acts, while also spotlighting releases from the biggest artists on the continent. As artists continue to share their music with us, this year, it’s only right that we return to pointing you towards as much great music as we can.

Though the pandemic has denied us live shows, where the magical bond between artists and fans unfolds in real-time, artists have remained committed to sharing music with fans, so we continue to honour their art and create space and visibility for them. We started this week’s selection by bringing you the new release from SGaWD who shared her debut video, “Feel Right”, as well as other new releases from Emo Grae, Mo’believe, Sean Tizzle, Ocho Foreign, Waje and more. Today, we’re catching you up on all the latest releases from around the continent that can serve up inspiration and comfort while we continue chasing the bag for the rest of this week. Gospel singer, Sinach has shared a new single and music video for her ever-expanding audience and we also have new releases from Niniola, Lil5ive, capespring, a much-anticipated remix featuring Davido, Ruger’s official debut and many others for you to enjoy. You’re welcome.

Colors Studio has continued to spotlight some of the underrated talents around the globe and African artists aren’t left out. Last weekend, we were introduced to the charming sound of Angolan singer, Carla Prata as she stepped into the famous studio and dropped her new single, “Certified Freak”, an empowering romantic anthem that soundtracked fans’ Valentine’s Day.

With her sexually provocative lyrics, “Baby put that pussy on my mouth yeah yeah/ I’m obsessed with how your booty bounce, yeah yeah”, “Certified Freak” is an ode to female empowerment and sensuality. It is carried by production that combines R&B harmonies with trap drums as Carla shows off her R&B vocal timbre with a laidback confidence that’s reminiscent of Syd of the Californian band, The Internet. This new song marks a turning point in her young career as she abandons the afrobeats and baile funk inspirations that permeated her latest EP, ‘Roots’, and it has also helped her grow more international attention.

Teased a few days ago, this Davido and Focalistic collaboration is one listeners have been hotly anticipating this month. Last May’s hit song, “Ke Star” was a continental sensation across Africa, garnering platinum success by the time its music video arrived in September. Unsurprisingly, “Ke Star” had a fan in Davido,  and with his keen collaborative spirit, the Nigerian artist has now jumped on the track, and apparently has even more gems with Focalistic. Ever adaptable, Davido’s Pop skills are on full display over the familiar Virgo Deep production, as he blends perfectly with the duo’s already established works.

Debuting on the Jonzing World single, “One Shirt” Ruger came into the limelight alongside a legend and one of the most prolific Nigerian artists of recent years. Beside D’Prince and Rema, Ruger held his own, and on his debut single he is thriving off the confidence that that performance left him with. Opening his self-titled debut single with the lyrics, “Man I spit fire to the mic from day one,” “Ruger” is an introduction to the rising rapper, from his pink hair and eye patch gimmick, to his flawless offbeat flow. Born ready, the debut single comes already fitted with a music video, directed by uaxstudio, which depicts him lighting up the show, which he promises to continue to do as his career takes off.

As the pandemic continues to force us to spend more time indoors, productivity appears to be at an all-time high as music fans have been getting more music from their favourite artists. Niniola closed her account for 2020 by sharing her debut album, ‘Colours and Sounds’ and barely two months into this year, she is already gearing to release a new project. The Queen Of Afro-House as she’s fondly referred to by fans announced on her social media that she’ll be dropping an R&B EP, ‘Promise’ before the end of this month. And while we wait for the tape’s release, she has whet our appetite by sharing the lead single and title track, “Promise”.

Just as promised, “Promise” is an R&B song as it features some of the most enthralling singing we’ve gotten from Niniola in recent times. She climbs up and down several vocal scales melodically over the laidback R&B instrumentals produced by Dj Rombee while she expresses the pain from getting her hearts broken by a lover; However, she channels the pain into a moving breakup anthem that can serve as a catharsis for listeners who have dealt with similar disappointments.

Though Sinach doesn’t make contemporary music, her music video for her 2016 gospel hit record, “Way Maker” is one of the most-streamed Nigerian videos on YouTube. She has just released a new single and music video, “Greatest Lord” as she continues to prove that gospel music is an intricate part of popular culture as the worship song already garnered over a hundred thousand views on the streaming platform since it was released last weekend.

Like all the best worship songs, “Greatest Lord” is built around swirling piano harmonies that give the song an enchanting aura while Sinach sings praises to her maker; “Your power has no limits/ Your name oh Jesus, the strongest”.  The song’s accompanying video is directed Ose Iria and it captures Sinach singing in a well-lit studio, accompanied by her backing choir and instrumentalists. Some visually appealing landscapes are also featured in the video and it helps convey the song’s message about God’s awesome power. “Greatest Lord” is the title track off her soon to be released album, ‘Greatest Lord’ and the song and video are sure to heighten anticipation for the project.

capespring captured our hearts and attention with his debut project, ‘Duality’, released last year when he had just turned 16. His songs narrating personal stories of romance and his knack for switching between singing and rapping drew comparison to artists like Frank Ocean and the tape earned him a spot on our monthly column, Fresh Meat, where we highlight artists from around the continent who are on the rise. capespring has announced that he’ll be sharing his debut album in March, ‘diodrama’ and he already set the ball rolling with his debut single for 2021, “indigo” and his newly released single, “puppy”.

Lo-fi harmonies have become capespring’s signature sound and he delivers another charming performance here, singing and rapping about his feelings for his muse over the lightweight instrumentals; “I’ve been watching you from across the room/Girl what won’t I do to get up close to you?”. “puppy” tells a story of young love and we can’t wait to hear what else the Kenyan singer has in store for us with his coming debut album.

Johnny Drille is an expert at the love song, and his latest offering is further proof of his dominance in the song-type. Typically melodic, “Bad Dancer” plays like a romantic drama, Drille’s his profound profession of love. Singing that despite his bad dancing, he wishes to embark on a midnight dance with his lover, holding her and serenading her lustfully, Johnne Drille tells his muse he wishes to “whisper into your ear that you’re beautiful and heavenly.”

“Deep in love,” the encompassing emotion has made Johnny Drille a better man, grateful that he has found his perfect match who fulfils all his prayers and more. In true romantic drama style, Johnny Drille’s profession of love comes with a plea to his lover to actually accept the love, which he delivers on the song’s vibrant bridge. This bridge builds up to the climax of the song, where an electric guitar solo plays beneath the chorus, and reaches its end as “Bad Dancer” closes with mystic chimes that portend a happy ending.

Whenever a new sound begins to pop on global music charts, Africa artists are never too far behind on the wave. Playboy Carti’s baby voice and his ad-lib focused flow have become the new rave since he shared his new album, ‘Whole Lotta Red’ last Christmas and with its success as his first number one album, it’s no surprise that we’re starting to hear more Nigerians tapping into his sauce. Plvyboi Pluto used to be an Afropop singer by the moniker Afrowonder till he shared his latest single, “Superman” where he adopts a trap flow and a baby voice that sounds inspired by Carti or UnoTheActivisit. Singing “Pop the molly, pop the zinzu/ Cause tonight there’s no controlling you”, “Superman” also incorporates the pill-popping excesses of the American hip-hop sound while referencing the colloquial Nigerian slang, ‘Zinzu’ to give the song a much needed Nigerian flair.

Ugandan singer and rapper, Awori has joined forces with French beatmaker, Twani to release a new album, ‘Ranavalona’, expected to be released later this year. Paired together by their label, Galant Records, the artist and producer teamed up to make an album in honour of the last queen of Madagascar, Ranavalona III and the newly-released lead single, “Hold Me”, hints at the empowering music they have in store as Awori raps then sings over the catchy hip-hop as she expresses her vulnerable emotions while talking us through her troubled thoughts; “Sometimes it just feels like I can’t relate/ I just want you to hold me”.

With her voice switching to match the emotions in her lyrics, “Hold Me” aims to reassure people craving love and those who are afraid to be vulnerable that they aren’t alone in their struggles. The upbeat instrumentals can certainly rejuvenate listeners and encourage us to be merry.

Rising singer, Lil5ive has today released a six-track EP, ‘Dreams & Imaginations’ – a stand out of which is the rousing single, “Happy”. One of the more upbeat numbers from the project, with a very empowering subject matter, “Happy” first speaks to finding one’s voice amongst a crowd of your peers, feeling at the same time unheard and anxious of being heard. Ultimately, though trials do not overcome Lil5ive, as he tells us that he is not one to be fucked with, and that no matter how hard life gets, he is resolved to remain happy.

With happy horns following the song’s chorus, it is clear that Lil5ive is resilient enough to smile through the pain that Nigerian leaders have exerted on its people, as he sings on the song’s second, much shorter, verse. In these more dreary days, “Happy” reminds us of the value of keeping in good spirits, if you can.

ICYMI: Catch up on all the latest releases from earlier in the week