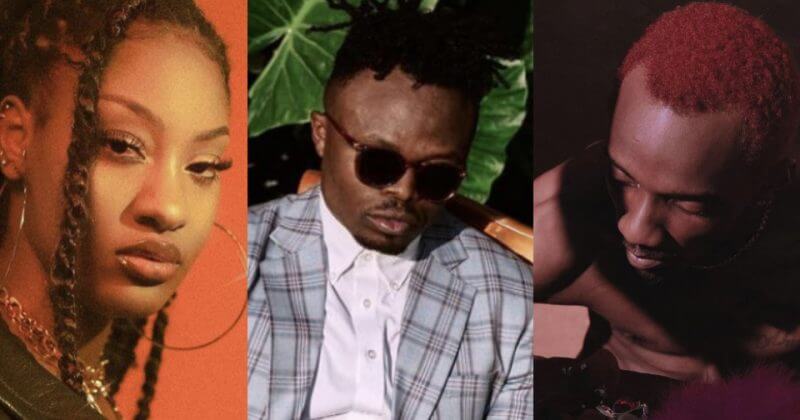 Music has been the driving force keeping us connected for the past ten months where we have been cut off from live experiences. As a result, last year, The NATIVE created our ‘Songs of the Day’ column as an avenue to curate some of the best and biggest songs from around the continent. In the time since its creation, the column has served as an avenue to discover music from niche, rising acts, while also spotlighting releases from the biggest artists on the continent. As artists continue to share their music with us, this year, it’s only right that we return to pointing you towards as much great music as we can.

For last week’s Songs of the Day, we brought you new singles from Ykb and Zlatan, Jackmillz, Dj Xquisite, Tomilola, Andy S, Veen, CKay and Mr Eazi. Today, we’re getting you back up to speed by bringing you the latest releases from Tems, MzVee and Sarkodie, Scorpion Kings x TRESOR, Fasina, Patoranking and Flavour and more. Though the pandemic has denied us live shows, where the magical bond between artists and fans unfolds in real-time, artists have remained committed to sharing music with fans so we continue to honour their art and create space and visibility for them. Enjoy.

Though Tems has a tendency to extend her range to accommodate rap flows, she’s most comfortable when she sings R&B melodies. Her latest project, ‘For Broken Ears’ emphasised her fascination with melancholic themes as she avoided upbeat Afropop productions and asserted her angsty state of mind on tracks like “The Key”, which she has just updated with an eerie music video to match.

The video for “The Key” was directed by UAX and it captures Tems and her cultish group as they perform a ritual ceremony by the beach. We see as Tems performs the song, singing, “when they try to take me down/ we’d be flying off the ground,” while her face is lit up by red lights and special effects that make her confident lyrics more menacing. The video highlights Tems’ growing reputation as an artist who makes music for everyday rebellion.

COVID has paused large, elaborate parties and ceremonies, but the pandemic hasn’t stopped Ghanaian singer, MzVee from singing about turning up. “I get vibe, we go turn up,” she promises listeners over the groovy Afropop instrumentals produced by Kizzy for “Balance”, one of the standout tracks from her album, ‘InVeencible’. The song also features Sarkodie who joins MzVee to delivered feel-good sentiments to make the song a rave starter.

Though the tape was released last year, MzVee has now revived it with a party-themed music video directed by Jay and Stephane Boateng. The video sets MzVee and Sarkodie at a dance club, where their lyrics are most appropriate. Set to the tune of Sarkodie’s romantic rap verse, the music video for “Balance” delivers all the right feels as we approach valentine’s season.

Electronic Dance music has continued its dominant run in South Africa, as the sound keeps evolving through different genres like Afrohouse, Gqom and the trendy Amapiano sound. Though more people have started to explore the sound across the continent, South Africa remains the epicentre, as they continue to experiment with different new electronic sounds and give us exciting new music, such as Scorpion Kings x TRESOR’s “Funu”.

The song is expected to feature on the ‘Rumble in the Jungle’ album made by DJ Maphorisa and Kabza de Small (professionally known as the Scorpion Kings) alongside Congolese born Afropop singer, TRESOR. The album is set to drop in April but while we wait, the trio has shared the video for the lead single, “Funu” and it shows them living lavishly in a mansion where they dance and perform the song.

The wait for Fasina’s new EP, ‘Love and Grief’, is finally over, with the artist finally shared the 4-track tape fans have been anticipating on Monday. The tape finds Fasina narrating different relatable stories about the highs and lows of his life in his uniquely laidback take on Afropop. And with quarantine testing couples new and old, the standout track, “Peace of Mind (LIFE)” basks in disagreement with his muse. Singing, “I cannot be here on time when you need me back/ so I feel I can’t lie and say I want you back,” the Lagos-based artist is exuding confident charisma here while he addresses the people who tried to undermine him in the past.

You’d be wise to avoid Patranking’s social media if you’re like me and you know already know you’re going to be alone for valentines. The singer appears to have recently gotten boo’d up with the self-proclaimed Mama Africa, Yemi Alade as he has been posting her pictures and captioning it “Mon Bébé”, the title of one of the more romantic songs from his latest EP, ‘Three’. Produced by Telz, “Mon Bébé” is set to the lightweight groove of Highlife as Patoranking is joined by Flavour to sing about their romantic feelings for their muse; “Oh my morning dew/ I can’t stop thinking of you”.

In line with the romantic theme, the music video for “Mon Bébé” plays out like a wedding ceremony for Patoranking and his muse, who turns out to be Yemi Alade. Though it’s likely that the relationship was set up as publicity for the song and video, they share pretty convincing intimate moments, so we wouldn’t be surprised if this match is true.

In December, Busiswa shared her third studio album, ‘My Side of the Story’, an adequately personal project where she takes control of her own narrative. Following the brazenly sexy video for the Kamo Mphela-assisted “SBWL”, she’s shared a new set of visuals for pre-released single, “Makazi”, a searing, slow boiling song dedicated to her Xhosa roots. Matching the pride in her voice over Mr Jazziq’s folksy Amapiano groove, the video features Busiswa in traditional regalia, as she sings at the side of the ocean and while miming a ritual ceremony. The video also features appearances by members of the local community from the village she calls home.

Last Friday, Ghanaian rapper Eno Barony finally released her long-teased sophomore album, ‘Ladies First’. As the follow-up to her aspirational 2018 debut, ‘Yaa Asentewaa’, Eno stakes her claim to respect with a better rounded album than her previous effort, framing her self-assured candour within the context of African women receiving lesser attention than their male colleagues. On standout selection, “Yentie Obiaa”, Barony teams up with songbird Efya for the second time on the album, and even though the entirety of the song is delivered in Twi, its components are familiar and remarkable: from Eno Barony’s laid-back, swaggering flow, to Efya’s honeyed singing, and Hype Lyrix’s groovy, mid-tempo production.

ICYMI: Catch up on all the songs released across the continent last week