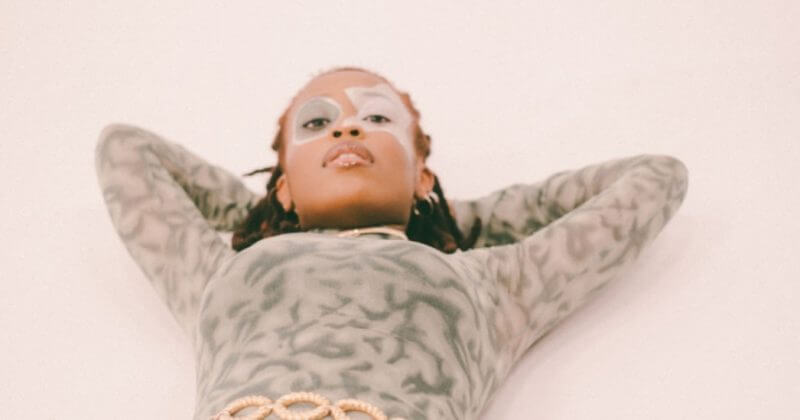 A year and three months–that’s how long it’s been since Lady Donli released her star-studded debut album ‘Enjoy Your Life’, the album that catapulted her to the fore of conversations surrounding retro-inspired afrocentric rhythms. Since then, the Abuja-based artist has been strutting with palpable confidence, racking up features with heavyweights such as Davido on the remix to her album standout “Cash”, starring alongside Bey-T, Ruth Ronnie, Trina South, and more for emPawa Africa’s “Kalakuta” and linking up with Ghana’s Darkovibes for the silky number “Wonda Wonda”.

But as the Enjoy Your Life artist looks towards the next phase of her career, she’s ready to evolve yet again, leaving the jovial effervescent Cash Mummy persona we have come to know and love this past year, for the new and improved Space Whore, a persona we’ll indisputably learn more about when the time is right (the album is 60% done). Ahead of this, Lady Donli has now shared a new two-pack release titled “Rockstar Parole” to commemorate the official passing of the baton from Cash Mummy to Space Whore, signalling the end of the EYL era. No, I’m not crying, you are!

The primary single in the two-pack release is the mid-tempo number “Rockstar” which finds Lady Donli narrating the story of her life since attaining rockstar status with the release of EYL. Gloriously produced by Kingsley Okorie from the Cavemen, the song’s bedding of smooth afropop drums and keys provides the perfect background for Donli to speak about her current reality.

She sings “I’m a rockstar so I need a baddie, not just anybody” on the song’s hook, sending a message to the people blowing up her phone to respect her space and her rockstar status. With compelling vocals throughout the number, she manages to fill the shoes of the rockstar lifestyle she purports by leaving behind whatever seems to be hurting her from her past ting, calling up her friends (shoutout Ayo Lawson), and hitting the clubs to have a good time. Her message is simple and her mission is clear, if you ain’t a baddie, don’t call her line.

The EYL era would not be what it is without its reference for old skool Nollywood and ’90s Nigerian music and the second offering in the pack titled “Parole” brings some of that much-needed nostalgia. On the mid-tempo number, Donli interpolates the legendary line from noughties afropop singing “I dey gbadu your parole” in the song’s opening moments, a line that famously featured on E.M.E’s 2012’s single “Sun Mo Mi”.

Donli harkens back to this era, delivering a bop that is reminiscent of those times but still capable of commanding many ears today. She’s suggestive as ever on this record, inviting her muse to surrender to her and willing to also lose herself in this person as well. She sings “Anywhere that you go/you fit lead, I go follow” over the propulsive rhythm putting herself on the menu and running through what’s on offer for the night.

“I said these songs are the last 2 from the EYL era. This the end of an era because album 2 is officially OTW.

I keep trying to explain, you can not box me. I created the box. Every time I create a new project, it’s a new sonic, I take on a new identity. Everything deliberate.”

She’s also shared the accompanying Lester Millado-directed music video for “Rockstar Parole” which sees Space Whore enjoying the fruits of her labour while living it big on set. Though we’re sad to see the end of an era, we’re even more hopeful for what she’s got cooking up next. As we’ve now seen from the visual feast, our bet is that Space Whore is here to slay.

You can watch the video for “Rockstar Parole” below.

.@tamimak_ Is a Staff Writer at The NATIVE and a proud BARBZ! Tweet me your fave Nicki lyrics