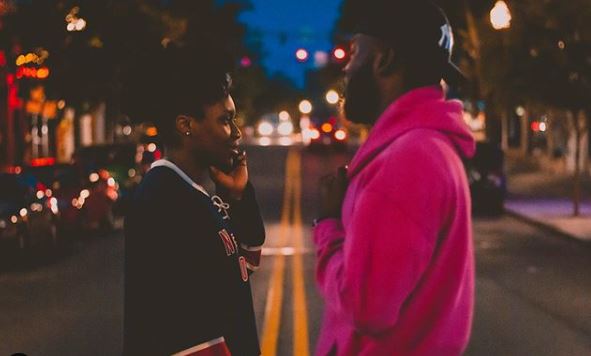 Technological advancements have made it an increasingly common practice for collaborators to work on music without being the same room. With the ability to connect on multiple platforms, and send beats and verses back-and-forth, artists and producers can strike a synergy on wax even if they’ve never met. These days, it is an endearing novelty when artists link up physically and forge organic chemistry, whether it’s on one track or on a full project.

Going through their individual catalogues, rapper/singer Shalom Dubas and producer/singer Toyin Ores have worked enough times to be tagged as frequent collaborators. Crafted physically and hand-in-hand, though, their joint new EP, ‘Oakwood Ave’—named after their current neighbourhood in Pennsylvania—formally establishes the vibrant confines of the pair’s creative relationship. On the EP, Shalom and Toyin merge their impressive abilities into a lustrous 6-track tape, ultimately buoyed by mutual respect for each other as artists, as well as an identifiable element of comradeship.

Tacked on simply for the fun of it, “Straight Out of Oakwood” is a conversation-style outro, featuring both artists and their third housemate Joe, trading light-hearted banter ranging from jokes on their shallow pockets to personal projections for the next year. In a broader context, the track heightens just how personable the EP is in its entirety.

Running the breadth between youthful wonder and a world-weary POV, ‘Oakwood Ave’ lands on multiple thematic points, tied together by Shalom’s remarkably pliable performances, and Toyin’s fusion-based musical choices. “Wallahi Talahi I’m a western baby, I can’t deny I’m an IJGB”, Shalom delightfully announces on the opening coda of intro track “Cry No More”. Backed by neon tinted synths and bouncy Afropop drums, she introduces herself with a catchy mix of quirkiness and technical proficiency lodged in her raps.

The EP reaches its visceral peak on “Holiday”, a lively cut that evokes the buoyancy of a party starter, featuring production that merges the slinky swing of Caribbean pop and the bombast of EDM. Singing in a gruff baritone, Toyin sets the summery mood with his hook, while Shalom drops two lightweight rap verses replete with vivid imagery alluding to a perfect ‘baecation’. By the next track, “(Bright) Lights”, things take a more solemn turn, with the chiming keys and pattering percussions Toyin produces, eliciting an ambient, crucial mood. Shalom’s rap follows the laid out precedent, reeling off an affecting litany of bars on self-discovery, using a nimble flow and riveting wordplay to deepen the technical quality of her meditative lyrics.

Singer Tim Lyre joins Shalom on “Young Heart Breaker”, adding a patois-inflected edge to the song’s musing on the aftereffect of an addictive relationship with a non-committing ex—“young heart breaker, it take somebody with heart to break one”, Shalom sighs on the hook.

Completing the guest list, Chicago rapper Femdot drops a stellar verse on Anti-police brutality diatribe, “1,2,3..”. Decrying the frequency of cops killing unarmed Black people, Shalom raps with urgent intensity in order to relay angst, rapping a desolate lyric line like “so desensitized but I still feel the pain”. In contrast to Shalom’s more personal outlook, Femdot takes a bird’s eye view with his lyrics, suggesting that extrajudicial killings happen even more frequently, and also smirking at the blatant injustice that often occurs, even in the presence of apparent irrefutable evidence.

“1,2,3..” is a rather sobering end to ‘Oakwood Ave’, but as it transitions into the celebratory outro/pseudo title track, the EP opens itself up as a worthwhile introduction to two artists who are influenced by, and highly perceptive of their environment.