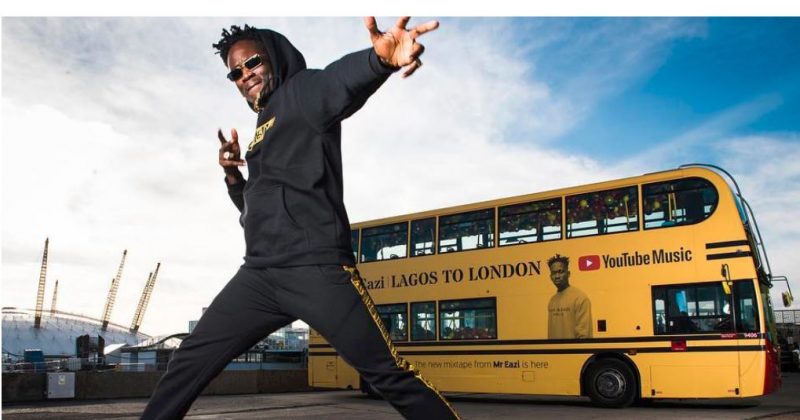 Accomplished debut projects typically put pressure on artists to improve or at least keep up the standard for their sophomore projects, but Mr Eazi hasn’t seemed too concerned with such insecurities. After spending most of last year on a world tour off his ‘Lagos to Accra’ debut, Mr Eazi had gotten a taste of Afropop’s global proficiency and had the international exposure to make him the face of the genre to new listeners.

Signing a licensing deal with Universal Africa, a record deal with Diplo’s Mad Decent and another licensing deal with Columbia records were some of the events that trailed the announcement of his ‘Life is Eazi, Vol. 2 – Lagos to London’. Before the tracklist and yellow London bus cover art confirmed his cross-continental direction, pre-released singles, “London Town” and “Overload” already hinted his intentions to blend influences with features from Giggs, Slimcase and Mr Real.

‘Life is Eazi, Vol. 2 – Lagos to London’ opens with “Lagos Gyration”, a vintage, African music inspired track with vinyl recording and low audio quality effects to accentuate the retro sound of the music Tomi Thomas, Lady Donli and her band contribute for the project. The laid-back festivity of the traditional drums, horns, percussion, high-life guitars harmonies, scatting vocals and lightweight melodies of the band serves as the tape’s intro, welcoming listeners to experience Africa through the music many Africans grew up listening to. The 15-track tape is full of songs that exist just outside the margins of your memory. Though some samples and lyrics are distinctly familiar, others leave you wondering if you had heard it played at weddings, sandwiched between Yinka Ayefele covers.

Simi assisted “Surrender” is a standout track, infusing the charm of her Yoruba accent and romantic lyrics over the catchy harmony of the beat Pheelz and Juls produce for the Lagos side of the tape. The next track, “Dabebi” featuring King Promise and Maleek Berry however leans more to the Ghanaian influences that inspired his debut project as it listens like a sequel to “Skin Tight” on one end and a tribute to Ofori Amponsah’s “Damaabi” classic on the other. And when the horns come in on “Property” featuring Mo-T, right after the “Na Money Be Koko” chant from backup singers, it’s easy to picture exotic dancers at an Afrobeat concert from the 70s.

Diplo assisted EDM track, “Open and Close” however realigns Mr Eazi with the current Shaku-Shaku trend in Afropop with the dance inclined beat and the catchy and repetitive chorus. “Keys to the City (Ogede)” and “She Loves Me” tries to expand the range of Mr Eazi’s influences to accommodate Caribbean inspired beat.

On “Miss You Bad” featuring Burna Boy, Mr Eazi’s fondness for lightweight themes of love and romance gets darker as he performs an ode to the ugly effect of infidelity in relationships. The fuzzy, laid-back mix of the tender guitar loop, warm bass line, a simple drum pattern, and airy background vocals set an uncluttered stage for Mr Eazi and Burna Boy to bare it all, laying vulnerable confessional lyrics to match the emotive beat.

Attention Produced by @guiltybeatz seats well into my interpretation of London vibes. It is probably the most minimal head bopper on the project, and fun fact is it almost did not make it on the project, intact I had to veto and put it in last minute. In my head, its a story of my intense physical and sensual connection with someone leading me to want to just go down and tie the knot, lol at the time I did the 1st recording with @guiltybeatz and @aod____ the lyrics were very naughty lol man had to clean it up. Bigup @lottoboyz who I had worked with on No Don remix and BadVibe it was only natural that I had them on this tape and when they sent back their verse I was like DAMN this is too fire to stay in my hard drive! Mastered by @whitfieldmastering mixed by @guiltybeatz this is def has a London signature ( art by @duroarts_ )

Tracks like Lotto Boyzz assisted “Attention” and “Yard and Chill” have the Afropop bounce that has dominated clubs in London lately and perhaps, the UK intents for the songs are why both are so daringly raunchy. The last set of tracks listen like the London side of the ‘Lagos to London’ tape, closing with “London Town” featuring Giggs. There is no shortage of vibrant music through the 38-minute listen time, but by infusing his vibrant personality and his impressive roster of artists enlisted from across two continents, ‘Life is Eazi, Vol. 2 – Lagos to London’ covers the trail of Afropop from it’s origin in Nigeria, to it’s present influence on music in the UK.

The project is accompanied with a “Lagos to London: Documentary” to serve as a sort of tour guide for those being introduced to Afropop for the first time. Mr Eazi’s rise to prominence is given a brief run-over before the video delves into an exposé on the music industry in Nigeria, focusing on the rest of the team which Mr Eazi credits for putting the album together. The documentary plays out like a behind the scenes show, bursting some of the myths surrounding the genre, exposing the less than legal side of the industry and featuring studio recordings sessions and some commentary from taste makers in the music industry. Westsyde Lifestyle dance group, Odunsi and the general manager of Sony Music West Africa, Michael Ugwu, are some of the contributors for the documentary.

ICYMI: Here are all the essentials from Mr Eazi’s ‘Lagos to Accra’ debut