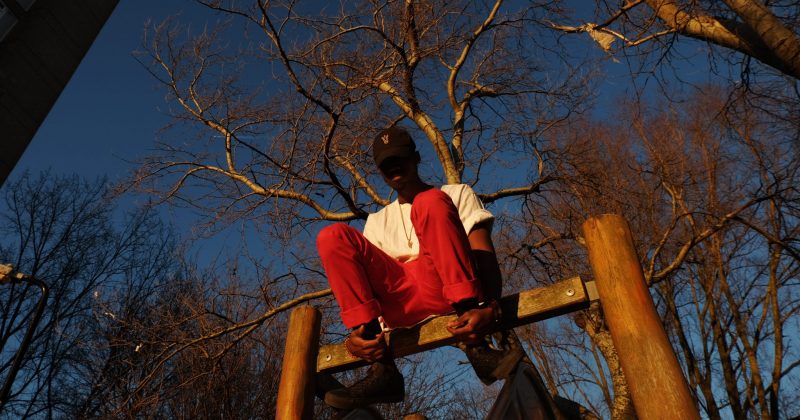 It feels like a lifetime ago when Nigerian born wunderkind DAP The Contract dropped his latest EP, Two Roads to global acclaim – just this April, actually. Since then the days have become longer, the drinks have become stronger, and we’ve welcomed sundress szn with open arms. One thing has held though: DAP’s insatiable work-rate, following the seven-track odyssey with a series of singles dropping on your new favourite day of the week: Thursday. No freestyles, no covers, no gimmicks – just solid new music that’s got something for everybody.

Documenting his post-college, pre-law school musical journey in the self-directed docu-series JRDN Yr, the rapper/producer offers insight into the camaraderie and good energy behind the weekly drops, aptly titled Contract Thursdays – kicking off in Episode 7 if you’re impatient, but it is well worth watching from the beginning if not for snippets from the story of a young black man on the come up in Trump’s America, then a peek into the life behind DAP’s own Twitter updates.

With a penchant for the melodic dialects and joie de vivre of Latin America, he sets the pace for Contract Thursdays with a dance track titled “Ven Y Baila, Mamacita”; a dead giveaway that you’re in for a Latin-inspired bop, this time of the Afro-Cuban variety that demands swaying hips and bopping heads from even the most rhythmically challenged. Swooning and wooing his cosita linda over brass and percussion, DAP captures the heart and soul of summer’s fleeting romance in between Puerto Rican violinist-cum-rapper Sebastián Otero’s affirmations in Spanish for added authenticity and sabor.

“Some Things Never Change” lets you catch your breath with its smooth nineties production as ego takes centre stage. Slick bars about the state of Generation Y come at you fast amidst references from 2005 Kanye to 2014 Ab-Soul, with singer SHE’s  dulcet tones bringing up the rear with what might just be a sneaky play on Melonie Fiona’s hook from “Beautiful Bliss”.

The last three songs come with visuals directed by the man himself, their low-budget production lending itself to the DIY mindset of this generation of slashies – you know the ones: the DJs-slash-fitness trainers-slash-beauty gurus who still somehow find time to edit vlogs for their budding YouTube channels. On “Das Mine”, DAP keeps up the ego strokes with assists from DIASPØRA members SO4P and Tone to brag about new whips whilst having a little too much fun on a roof, flexing the chemistry we’ve come to love on previous collaborations like Sailor Moon.

Blending a scholarly approach to innovative production with streetwise lyricism, from referencing Kanye in his Late Registration heyday to addressing the significance of the three-dot thought bubble in modern-day iPhone relations on the fourth installment “Details”, DAP has cemented his place as one of Nigeria’s finest musical exports. His storytelling skills shine in the track’s culturally relevant narrative as he circles back to matters of the heart to close out the series.

But in honing his unique style of genre-bending, DAP now stands apart from the new class of Nigerian artists – Tay Iwar, Nonso Amadi, Odunsi the Engine et al. – drawing from his multicultural origins to catapult Nigerian music in all its flavours into the limelight, no cosigns necessary. Take “IDK Interlude”, the latest release for example. Already being touted (by this listener, anyway) as this year’s sad-boy anthem, DAP tackles loneliness and relationships on the decline as he sits on the receiving end of the savagery in “Details”, with production assists from New York natives, EZÉ and Warner Meadows, and directing assists from Austin Deery in its trippy one-take music video.

Whether he’s dropping knowledge on social issues or serving up unadulterated beach vibes with no chaser, there’s a certain malleability in the twenty-four-year-old’s influences which, when coupled with his commitment to coming out with music that’s fresh and entirely his own from whatever genre(s) he’s experimenting with, gives his art an increasingly complex but altogether refined sound that’s perhaps less discernibly “African” than his aforementioned compatriots. Whatever you’re in the mood for, DAP’s probably got you but if not, you need only stay tuned.

DAP the contract bares his soul in an “open letter”